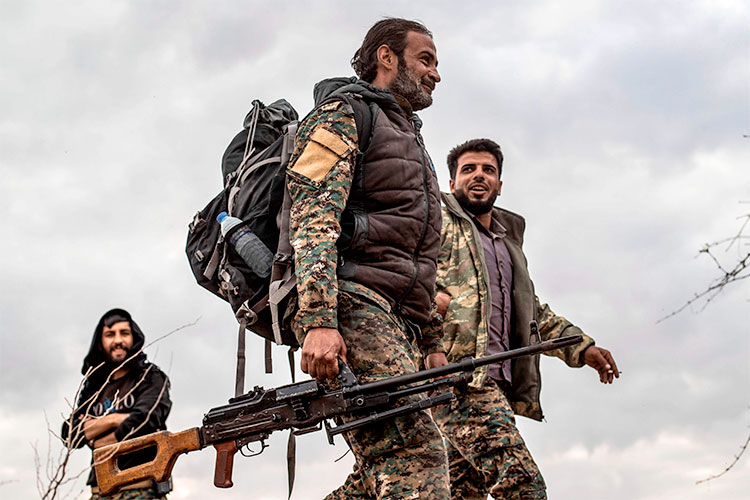 Fighters of the Syrian Democratic Forces in the village of Baghouz on Friday. Agence France-Presse

For weeks, the Kurdish-led Syrian Democratic Forces have been battling to crush Daesh militants cornered in a riverside encampment in the village of Baghouz.

The makeshift camp of tents and tunnels is all that remains of a once-sprawling “caliphate” declared in 2014 over swathes of Syria and neighbouring Iraq.

The SDF and coalition warplanes have rained fire on the enclave since last Sunday, blitzing more than 4,000 Daesh militants and family members into surrender.

US-backed forces have reduced daytime airstrikes and shelling to allow for more exits from the last extremist bastion.

But AFP journalists at an SDF post inside Baghouz heard sporadic rounds of mortar fire on Saturday, and an SDF spokesman said fighting was ongoing.

“There have so far been no surrenders (today) and there’s no sign they are giving up,” he told AFP.

An SDF statement said the latest fighting broke out after the Kurd-led force attacked Daesh positions inside Baghouz.

Around 32 militants, including at least four senior Daesh figures, were killed in the battle, it said.

On Friday, Daesh launched three suicide attacks outside Baghouz, killing six people as they fled the village near the Iraqi border.

They were the latest casualties in Syria’s devastating civil war as it entered its ninth year with 370,000 dead.

The US-led coalition said the bombers were dressed in women’s clothing and had mixed with others who were surrendering.

“Daesh has proven to demonstrate a reckless disregard for human life and continues to be a global threat,” it said late Friday.

“We stand by our SDF partners as they fight to liberate that last Daesh-held territory,” it said on Twitter.

“From their perspective they are resisting, they are not giving up quickly,” he said.

Die-hard Daesh militants have unleashed a wave of suicide bombings over the past week to impede the SDF advance.

It remains unclear how many militants and civilians remain inside Baghouz.

More than 61,000 people have streamed out of Daesh-held territory since December, a tenth of them suspected militants, according to the Britain-based Syrian Observatory for Human Rights.

The exodus has sparked a humanitarian crisis in Kurdish-run camps for the displaced further north, where civilians have been transported.

They include the wives and children of alleged foreign militants, hundreds of whom are being held by Kurdish forces.

Around 3,000 people arrived at Al Hol camp from Baghouz over the past two days, pushing the camp’s population to over 69,000, the International Rescue Committee (IRC) said on Saturday.

According to the United Nations children’s fund, Unicef, the camp was designed with capacity for just 20,000 people.

The UN said most of the new arrivals “show clear signs of distress, fatigue, malnutrition and require some form of medical care or attention”.

According to the IRC and UN, since December around 122 people have died en route to the camp or shortly after arriving, mostly small children, two of them on Thursday.

“There is an urgent requirement for funding to continue health and nutrition interventions in the camp,” the UN said.

At the height of its brutal rule, Daesh controlled territory in Syria and Iraq the size of the United Kingdom, with a population of millions.

The total capture of the Baghouz camp by the SDF would mark the end of the cross-border “caliphate” it proclaimed more than four years ago.

But beyond Baghouz, Daesh retains a presence in eastern Syria’s vast Badia desert and sleeper cells in the northeast.

The militants have continued to claim deadly attacks in SDF-held territory in recent months.