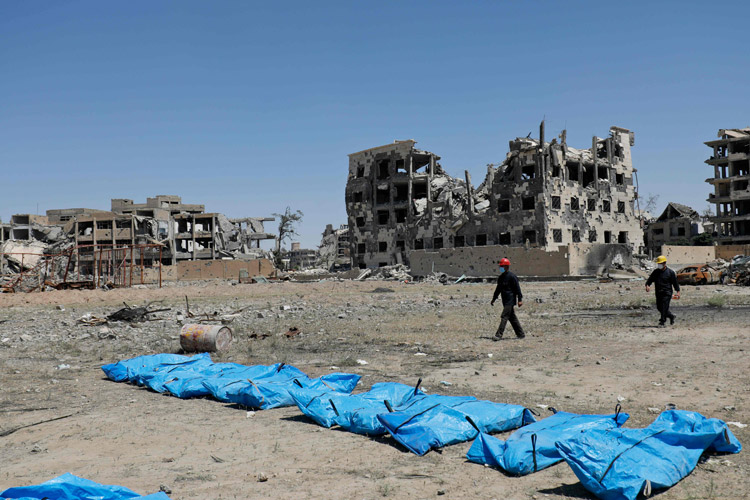 Bodies that have been found in a mass grave in the former Daesh stronghold of Raqa in Syria. Eight years of war in Syria have left more than 370,000 people dead including 112,000 civilians. File photo/ AFP

BEIRUT: Eight years of war in Syria have left more than 370,000 people dead including 112,000 civilians, a monitor said on Friday.

The Syrian Observatory for Human Rights, which has a network of sources across the country, said more than 21,000 children and 13,000 women were among the dead.

The conflict flared after unprecedented anti-government protests in the southern city of Daraa on March 15, 2011.

Demonstrations spread across Syria and were brutally suppressed by the regime, triggering a multi-front armed conflict that has drawn in foreign powers and militant groups.

The Britain-based Observatory’s last casualty toll on the Syrian conflict, issued in September, stood at more than 360,000 dead.

Over 125,000 Syrian government soldiers and pro-regime fighters figured in the latest toll, the monitoring group said.

It said other fighters, including rebels and Kurds, accounted for 67,000 of those killed.

The devastating conflict has displaced or sent into exile around 13 million Syrians, causing billions of dollars-worth of destruction.

With the support of powerful allies Russia and Iran, President Bashar Al Assad has won his war for political survival but his country is fractured and cash-strapped.

But key areas remain beyond regime control, including a swathe of the oil-rich northeast held by Kurdish-led fighters.

Washington backs the Syrian Democratic Forces, which are spearheading an anti-Daesh campaign, which is drawing to a close near the Iraqi border.

Idlib in northwestern Syria, held by HTS, is protected by a ceasefire deal between Ankara and Moscow which has seen Turkish troops deployed to the area.

Syria’s conflict is estimated to have set its economy back three decades, destroying infrastructure and paralysing the production of electricity and oil.

Assad, however, has regained control of key commercial arteries and started a tentative comeback on the Arab diplomatic scene.

Several countries have called for Syria to be reintegrated into the Arab League, from which it was suspended as the death toll from the uprising mounted in 2011.