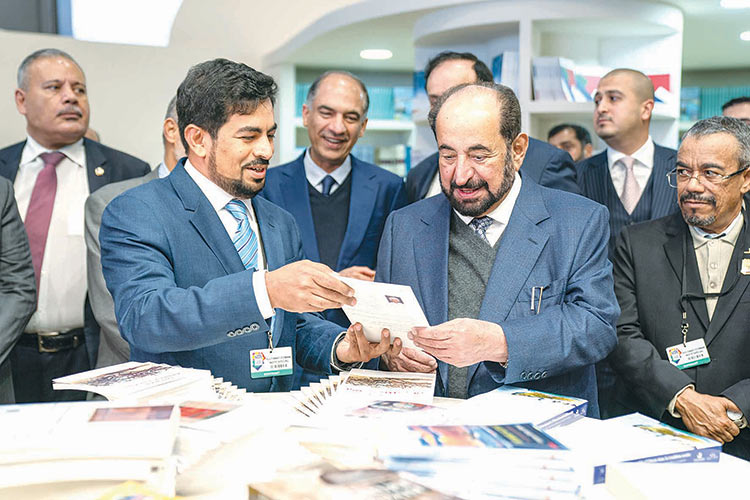 Sheikh Sultan visits the pavilion of the Emirate of Sharjah at the 39th Paris International Book Fair. WAM

paris: His Highness Dr Sheikh Sultan Bin Muhammad Al Qasimi, Supreme Council Member and Ruler of Sharjah, stressed the importance of transmitting the original Arab and Islamic culture to different countries of the world through various international cultural forums which constitute gatherings for world cultural at which the Arabic culture is highlighted through historical books, novels, stories, music and others.

This came during Sheikh Sultan’s visit to the pavilion of the Emirate of Sharjah represented by the Sharjah Book Authority (SBA), participating in the 39th Paris International Book Fair.

During his visit, Sheikh Sultan discussed important cultural issues with many publishers, writers and media personalities. He stressed that the development of culture is not limited to reading only, but also covers all methods of receiving such as lectures, schools and universities in addition to the arts, theatre and other cultural tools.

He pointed out that the drama works he writes reflect a true reality, conveying historical events and touching on the issues of the Arab and Islamic worlds, and the challenges they face, without distortion of facts or falsification.

Sheikh Sultan toured a number of pavilions of the Arab countries participating in the Fair, where he stopped at the pavilion of the Sultanate of Oman, the distinguished guest of the year at the Paris International Book Fair, praising the cultural renaissance of Oman with the support of Sultan Qaboos bin Saeed, Sultan of Oman. He was amazed by the distinguished literary and heritage output that contributes to the distinctive cultural exchange and the transfer of Arab culture and cultural image to the different countries of the world.

Sheikh Sultan also referred to his work on the publication of a book dealing with the historical aspect of the Sultanate of Oman, which he started working on when he learned of the selection of Oman as a distinguished guest of this year’s edition of the Fair, pointing out that he is planning to release the book at the Muscat International Book Fair.

During his tour of the pavilion of the Sultanate of Oman, His Highness the Ruler of Sharjah was briefed by Dr Abdul Mun’em bin Mansour Al Hassani, Omani Minister of Information and Dr. Abdullah bin Nasser Al Harrasi, Chairman of Public Authority for Radio and Television in Oman, about the most prominent literary publications displayed at the pavilion, and listened to an explanation about these publications, exhibitions and accompanying events.

He also visited the pavilion of Kuwait where Sami Al Sulaiman, Kuwaiti Ambassador to France detailed His Highness about the cultural and literary exhibits.

Sheikh Sultan’s visit also included a number of pavilions of Arab countries and participating institutions where he familiarised himself with their cultural efforts and cultural highlights.

Sharjah Book Authority (SBA) was launched in 2014, by Emiri decree by His Highness  Dr Sheikh  Sultan Bin Mohammed Al Qasimi, UAE Member of the Supreme Council and Ruler of Sharjah. SBA’s mandate includes enhancing investment in creative industries, building a platform for culture and knowledge exchange between people of the world, highlighting the importance of books in today’s multimedia world, and supporting the children’s book industry.