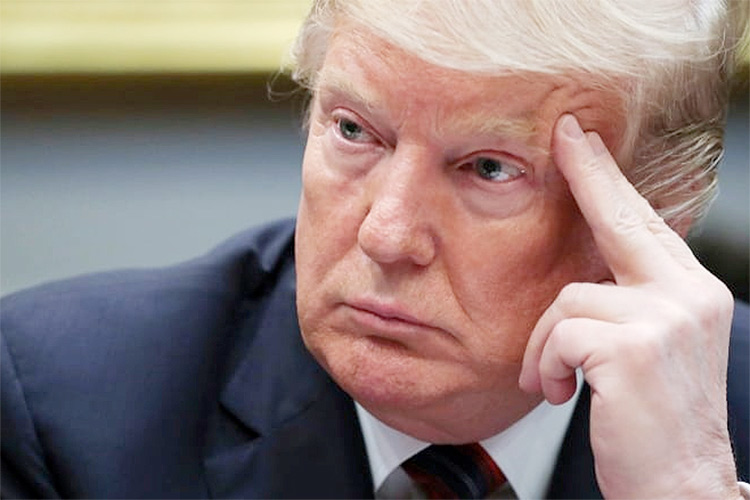 Donald Trump said 'I am prepared to veto, if necessary.' Reuters

The US senate was poised on Thursday to pass a proposal to terminate President Donald Trump’s declaration of an emergency at the southern border, defying his threat to veto the measure and heavy lobbying of his fellow Republicans.

Five Republican senators have said they back the measure passed in February by the US House of Representatives, which is controlled by Democrats. At least four Republicans are needed to pass it in the 100-seat Senate, along with all 45 Democrats and two independents.

But the measure is unlikely to become law given that a two-thirds vote of Congress is needed to override a presidential veto, which Trump vowed to issue if it passed the chamber on Thursday.

“I am prepared to veto, if necessary,” Trump said in an early-morning post on Twitter before senators took up the measure.

Vice President Mike Pence met Republican senators this week to try to tamp down support for the measure, with some Republicans worried that future Democratic presidents could usurp the power of Congress to fund the government and use the emergency declarations to fund their own pet programmes.

Pence told senators that Trump would back a second bill offered by Republican Senator Mike Lee, which would end future emergency declarations after 30 days unless Congress votes to extend them.

Lee said on Wednesday the White House had subsequently made clear his bill did “not have an immediate path forward.” He added he would vote on Thursday to end the emergency declaration.

At stake are billions of dollars in funding for a wall along the US-Mexico border that Trump is demanding but Congress has refused to fully provide. The stalemate led to a 35-day partial government shutdown that ended in January.

Under the emergency declaration Trump signed on Feb.15, he would take money from other federal programmes to build the barrier he says is needed to curb illegal immigration and drug trafficking.

Democrats deny there is an emergency at the border, saying border crossings are at a four-decade low.

Court challenges have also been filed asserting it is Congress, not the president, that decides how taxpayer money is spent.

Meanwhile, the Mexican government said it is launching a formal search for 19 migrants who were pulled from a bus last week by armed men in the northern border state of Tamaulipas.

Tamaulipas state police, the army, federal police and prosecutors will participate in the search, according to the National Search Commission for Missing Persons.

Mexico’s top security official said that in addition to the 19 seized last week, 25 others were kidnapped last month from a different bus, for a total of 44.

The search effort, dubbed “Operation to Find them Alive,” refers specifically to the 19 men snatched in the more recent incident. It wasn’t clear if a separate effort was underway for the 25, though some Mexican officials have suggested the victims might already be in the United States.

The government hasn’t specified the nationalities of the victims, but they are believed to be from Central America.

The kidnappings recall the horrors of 2011, when dozens of passengers were hauled off buses by drug gangs in Tamaulipas, killed and their bodies dumped in mass graves. In 2010, dozens of migrants were also abducted and massacred by the same gang.

For that very reason, most of the migrant caravans that have crossed Mexico in recent months have carefully avoided crossing through Tamaulipas, even though it often represents the shortest route to the US border.

On Tuesday, President Andres Manuel Lopez Obrador said “we are investigating to be sure, because there is a theory that this is a method that is used to get into US territory. It’s not that they disappear, but rather that they cross the border that way. We have already had two cases like that.”

Officials said there were indications the missing men had hired a smuggler to get them over the border. But it was unclear why the smugglers would have used such an elaborate and violent plan to meet the migrants.