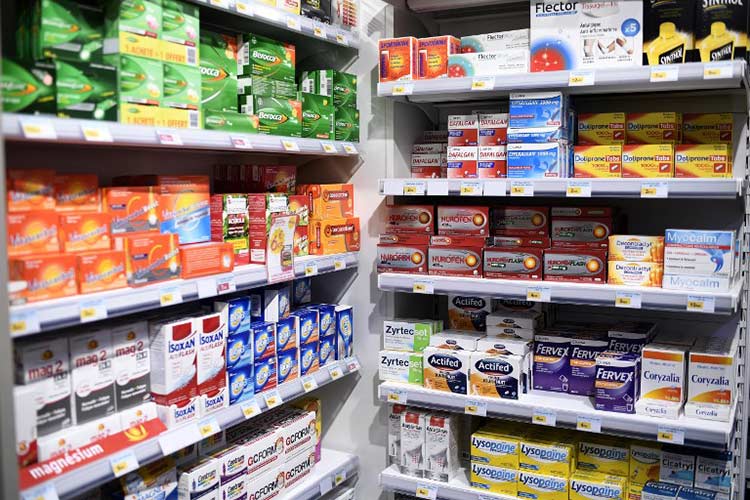 Vitamins and medicines are on display at a pharmacy. AFP

Research in Vitamin D deficiency can play a major role in understanding various causes of illnesses. These researches can lead to important cures as well as effective preventive therapies and approaches, said Sheikh Nahyan Bin Mubarak Al Nahyan, Minister of Tolerance in Abu Dhabi on Thursday.

Delivering keynote address at the “Abu Dhabi Annual International Conference on Vitamin D Deficiency and Human Health,” Sheikh Nahyan said that prevention and treatment of Vitamin D deficiency is one area of medical research that holds special promise and is poised to expand significantly in the future.

“The twenty-first century has been heralded as the century of the biological sciences.  Guided by ground-breaking research conducted throughout the world, there can be no doubt that we stand in the midst of a new era of exciting discoveries,” he said.

“Research into this topic is essential, and has a great potential to help advance medical knowledge and practice around the globe,” he added. Sheikh Nahyan noted that Vitamin D is not only an essential vitamin, but also an indispensable hormone for human growth and survival. However, he was surprised to note that the Middle East is listed among the world’s regions where Vitamin D deficiency is prevalent.

“Since most people relate Vitamin D with exposure to sunlight, why would the sunny Middle East have this problem? I realize that in this modern world, most of us spend too little time outside in direct sunlight. And, sadly, this is an increasing problem with our young people where deficiency in Vitamin D can cause a myriad of life-long health-related issues, including bone and teeth development, auto-immune processes, disposition swings, obesity and disease resistance,” he said.

He said that the field is developing very rapidly.  New discoveries concerning Vitamin D deficiency are truly exciting; those discoveries will enhance our abilities to face many of the major global health problems.

He stressed that new and continued developments in medical research must be turned into practical treatments and preventive strategies.

Dr Shamsheer Vayalil, Conference President and Managing Director of VPS Healthcare, Abu Dhabi, said that some of the recent research findings have made this year’s conference more relevant.

“Some groundbreaking research has brought even more insights – and questions – to our knowledge and understanding of Vitamin D. We know that people with low Vitamin D levels are at risk for certain health problems, but the question is, if you treat the Vitamin D deficiency, can you prevent those problems? The jury is still out for many of the questions,” he said.

Mentioning the results from ‘Vitamin D and omega trial (VITAL),’ the largest and longest randomised trial on Vitamin D, Dr Shamsheer said that nearly 10 years and more than $40million in the making, VITAL found no benefits from Vitamin D or marine omega-3 fatty acid supplementation in the prevention of major cardiovascular disease or cancer.

“In the Vitamin D analysis of VITAL, no differences were seen across a wide range of secondary endpoints, stroke, cardiovascular death, death from any cause, and a range of cancers and cancer deaths. And that is why we need more research,” he said.

Dr Fatime Al Anouti, Chair Scientific Committee of the conference, said that lack of awareness about the impact of Vitamin D deficiency has resulted in high prevalence of this silent disease. She said that a person suffering with Vitamin D deficiency may not realise it because the symptoms – like fatigue, dizziness, hair loss, inability to focus – in the beginning may confuse with symptoms of other diseases.

“After sometime, it will start affecting the overall health. Studies have demonstrated close relation with Vitamin D and disease like Parkinson’s, Alzheimer’s, cardiovascular disease, multiple sclerosis, diabetes, Osteoporosis.  Thus this is important to focus on its symptoms from an early age,” she said.

She stressed that it is not enough to supplement when you find out that you are suffering from Vitamin D deficiency.