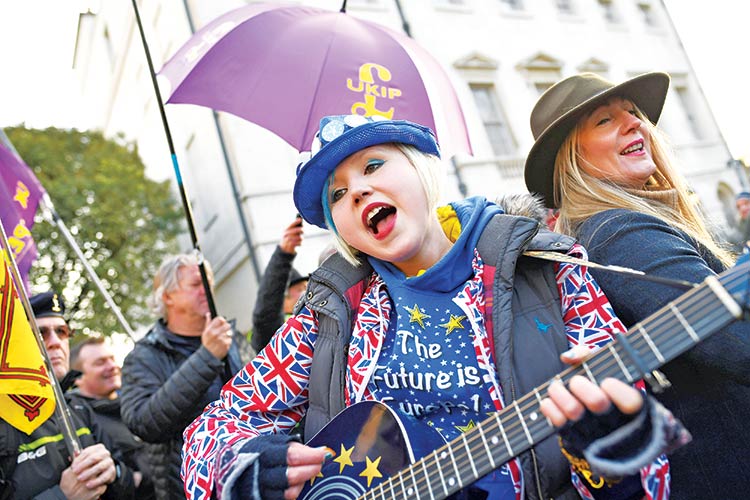 An anti-Brexit protester plays guitar outside the Houses of Parliament in London on Thursday. Reuters

British MPs on Thursday voted massively against delaying Brexit in order to hold a second referendum, dashing the hopes of pro-European campaigners who want a new public vote.

Three years after Britain voted to leave the European Union, only 85 MPs voted in favour of the amendment and 334 voted against, with most lawmakers from the main opposition Labour Party abstaining from the vote.

US President Donald Trump on Thursday criticised British Prime Minister Theresa May’s handling of the Brexit talks for Britain’s departure from the European Union and said another referendum on the issue would be unfair to the side that won.

Trump, who met May last summer at Blenheim Palace, England, said he had given her his ideas on how to handle the negotiation on Britain’s break from the European Union but that she had not taken his advice.

“I will tell you, I’m surprised at how badly it’s all gone from the standpoint of a negotiation,” Trump told reporters in the Oval Office as he met Irish Prime Minister Leo Varadkar.

“But I gave the prime minister my ideas on how to negotiate it and I think you would have been successful. She didn’t listen to that, and that’s fine. I mean ... she’s got to do what she’s got to do. But I think it could have been negotiated in a different manner, frankly.” Trump said he planned to stay out of the negotiations.

He also said another vote on Brexit would be unfair, and reiterated that he would like to see a US trade deal with the United Kingdom after it leaves the EU.

“I hate to see it being, everything being ripped apart right now. I don’t think another vote would be possible because it would be very unfair to the people that won,” Trump said.

France does not support a short extension to Article 50 if it is merely for Britain to try and reopen negotiations over its divorce terms with the European Union, an official in President Emmanuel Macron’s office said.

“It is clear in any case that a short extension to talk again about the Withdrawal Agreement is out of the question,” the official at the Elysee palace said.

“So it’ll either be a no-deal now, or a change of plan from London, of which we see no sign at the moment,” the official added. European Union leaders meeting next week will consider pressing Britain to delay Brexit by at least a year to find a way through its domestic deadlock, an EU official said.

French officials have said they would veto an extension if Britain only used it to continue to try to win concessions on the Irish backstop, which Paris and other EU leaders say is non negotiable.

Paris would only agree to delay Brexit if London came forward with a credible solution, such as if Britain called an election, held a second referendum or presented a new plan that was acceptable to all sides but needed time to be finalised.

Two weeks before Britain is due to leave the European Union, May is using the threat of a long extension to the Brexit deadline to push eurosceptic rebels in her Conservative Party to finally back her deal.

Portugal is ready to support a delay to Britain’s exit from the European Union if London properly justifies such a request, but it has to be sufficiently long so that the sides can find an acceptable solution, the Foreign Ministry said on Thursday.

“Allowing an extension by just some weeks we would create an illusion that the current problem is of a technical nature, when what we’ve got is a political issue,” the ministry’s statement said.

European shares rose to a five-month high on Thursday, boosted by strength in the banking sector after Britain’s parliament voted to reject a disorderly Brexit.

Sentiment improved from cautious to upbeat after the open, ahead of another vote on Thursday evening that could delay Britain’s planned departure from the European Union.

“We now see a 60 percent chance (up from 55 percent) that a close variant of the prime minister’s current Brexit deal is eventually ratified,” Goldman Sachs analysts wrote. The probability of a no-deal Brexit was now 5 percent, they said.

Leonardo scored its best day in more than 7 years, up 13 percent, recouping some of its steep losses since January 2018, after the Italian defence group said net profit surged and it saw sales rising in 2019.