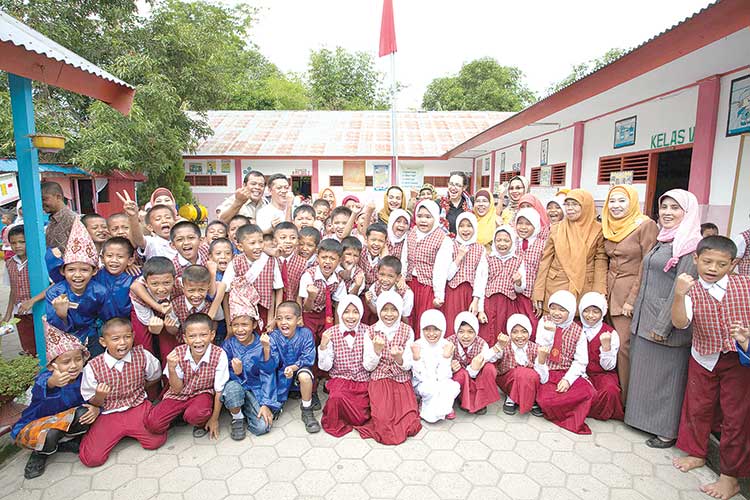 The programme in Indonesia will be implemented in partnership with Save the Children.

Dubai Cares, part of Mohammed Bin Rashid Al Maktoum Global Initiatives, revealed on Tuesdy plans to scale-up its programme in Iraq in an effort to support the rehabilitation of education services in Mosul and Baghdad following the large-scale displacement crisis that hit the country. The new Dhs10,900,960 programme will be implemented in partnership with War Child UK and builds on the work carried out with a previous grant of Dhs1,836,750 in 2017. Dubai Cares also announced the kickoff of the implementation phase of its Education in Emergencies (EiE) programme in Indonesia which aims to restore schooling in areas affected by the destructive Sulawesi earthquake and tsunami that hit the country in September 2018. The Dhs3,673,500 programme in Indonesia will be implemented in partnership with Save the Children. Both announcements were made during the Dubai International Humanitarian Aid and Development Conference & Exhibition (DIHAD) 2019, which is being held between 12 and 14 March 2019 at Dubai International Convention and Exhibition Centre.

Tariq Al Gurg, Chief Executive Officer at Dubai Cares, said: “The crises in Iraq and Indonesia have placed severe burdens on both governments and stretched already thin resources. These two new programmes express our commitment to addressing education in emergencies by re-establishing access to education and providing quality education to conflict-affected children and young people within safe and inclusive spaces. We are confident that the direct and indirect impact of these interventions on students, their families, teachers and the community at large will provide a sense of normalcy, stability and hope for the future.”

The two-year new programme in Iraq titled, “Recovery and Resilience in Education in Iraq”, aims to impact the lives of 27,035 beneficiaries, including 14,400 students who will benefit from a refurbished learning environment and 1,400 children who will benefit from improved early childhood care and development services. The programme will also provide 9,620 children and young people with informal education, psychosocial support and build safe and inclusive environments for them.

Dan Collison, Programs Director for War Child UK, said: “Following on the success of our 2018 programme which supports the rehabilitation of schools and education in Mosul, War Child is delighted to continue its partnership with Dubai Cares through this ambitious and generous new grant that supports our work in Iraq. Over the next two years, we will be working with our partners to deliver a comprehensive programme of social support to long-term displaced and newly returned children and communities, including a focus on psychosocial care, community based protection, school rehabilitation and teacher training. The scale and duration of the grant will help us to make a transformative impact on the lives of children affected by conflict in Iraq, and we are proud to be working with Dubai Cares to achieve this.”

In Indonesia, Dubai Cares’ program titled, “Education Response for Children Affected by Indonesia’s Sulawesi Earthquake and Tsunami” is part of the collaborative response to bring the affected children back into schools to continue their education following the 7.5-magnitude earthquake and tremendous tsunami that hit the country in September 2018.

The programme is set to benefit approximately 13,000 members of the communities including children, young people and teachers, through the repair and refurbishment of 6 schools and learning centers, establishing 70 Temporary Learning Structures (TLS), and training 285 teachers to address children’s psychological and emotional needs.

The governments of Iraq and Indonesia have made significant investments to shore up their education infrastructure and sustain school enrolment, especially in times of extreme hardship. However, in the face of large-scale population displacement and armed conflict, 3.2 million school-aged children in Iraq are attending school irregularly or not at all and only 50 per cent of displaced children receive a formal education.