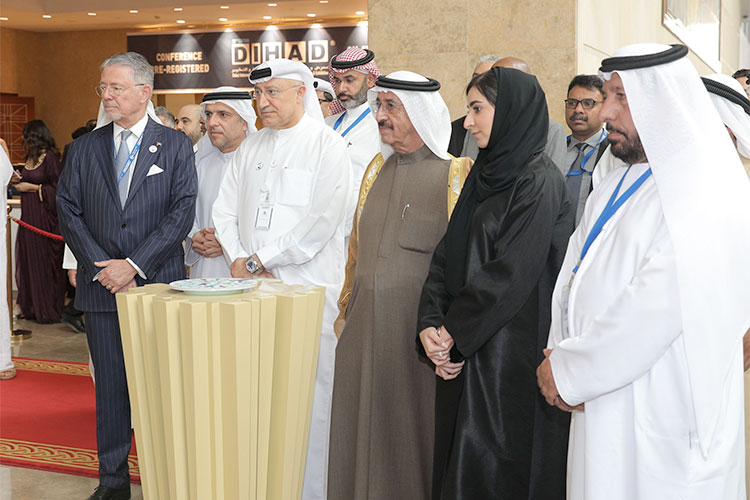 VIPs, participants, and delegates of Dihad.

The 16th edition of the Dubai International Humanitarian Aid and Development Conference and Exhibition (Dihad) has started and was inaugurated by Sheikh Hasher bin Maktoum, Director General of Dubai’s Department of Information.

The event is being held under the patronage of His Highness Sheikh Mohammed Bin Rashid Al Maktoum, Vice President and Prime Minister of the UAE and Ruler of Dubai at the Dubai International Convention and Exhibition Centre.

Themed ‘People on the Move’, the three-day premier humanitarian gathering in Dubai is exploring ways to help refugees and migrants in their rehabilitation efforts while at the same time addressing risks and challenges facing them at different stages of migration.

Prior to the opening ceremony, VIPs, participants, and delegates of Dihad paid tribute to those who perished in the Ethiopian Airlines crash on the March 10 including more than 19 members of the UN family.

In a speech delivered on behalf of Sheikh Hamdan bin Zayed Al Nahyan, Representative of the Ruler of Abu Dhabi in the Western Region and Chairman of the UAE Red Crescent Authority, Rashid Mubarak Al Mansouri, Deputy Secretary- General of Local Affairs at the Emirates Red Crescent (ERC), said, “We are glad to be here again for the 16th edition of Dihad Conference and Exhibition, in the UAE Year of Tolerance, to shape together the future vision of the humanitarian aid and put a new footprint on the path of unlimited humanitarian generosity which the UAE had drawn its track through a long course of giving. It is no coincidence that the UAE ranks first in the world for the fifth consecutive year as the largest international donor of development aid compared to its national income according to a report issued by Development Assistance Committee (DAC) of the Organization of Economic Cooperation and Development (OECD). This confirms the commitment of the UAE to its universal humanitarian mission in all its impartiality and regardless of the ideological, racial or sectarian considerations, as according to the UAE, humans are humans regardless of anything else and this is the only standard to help them. This will always remain the mark of the UAE and its wise leadership and will always remain a firm approach in its foreign policy.”

“The UAE has early detected the humanitarian repercussions of migration and asylum, and worked through its government and humanitarian organisations, led by the UAE Red Crescent to mitigate those repercussions by supporting the areas of real development in many countries and human communities, and adopted leading initiatives in the areas of education, health, improving living conditions, supporting youth stability, providing their needs and enhancing their capabilities to cope with difficult living conditions. Furthermore, the UAE is actively contributing to the protection of refugees and displaced persons through their extended programmes in their temporary areas of residence. It also contributes to improving the ways of voluntary repatriation through the development of their communities of origin; and in this regard we have fruitful cooperation and constructive partnership with the Office of the United Nations High Commissioner for Refugees and the International Organisation for Migration,” he concluded.

From his side, Antonio Vitorino, Director General of International Organization for Migration, (IOM) said during his opening speech: “In recent years, large-scale movements of people, driven by diverse motivations, have posed a political and humanitarian challenge to the international community. IOM’s experiences with large-scale movements -- whether populations of internally displaced, or across borders -- in recent years has taught the organisation a number of key lessons.”

He added, “Regional solidarity towards hosting those in need is the first, and most important element of an international humanitarian response. We have witnessed countries across the Mena region demonstrating exceptional solidarity in recent years.”

He concluded, “Today, through this event we announce that IOM will continue to work to bring together a wide range of voices and perspectives – primarily across the UN, but also key non-state stakeholders – to ensure that the international community pursues a coherent, and robust, approach to migration in the twenty-first century that is based in fact, not fiction.”

On his part, AminAwad, Director of Middle East and North Africa Bureau and Regional Refugee Coordinator, UNHCR delivered a speech on behalf of  Filippo Grandi, High Commissioner for Refugees, UNHCR, said, “Looking ahead, I hope that the United Arab Emirates will become an important partner in our efforts – promoting the values of compassion and tolerance, and forging new, innovative and practical ways to support refugees become self-reliant, and rebuild a future.