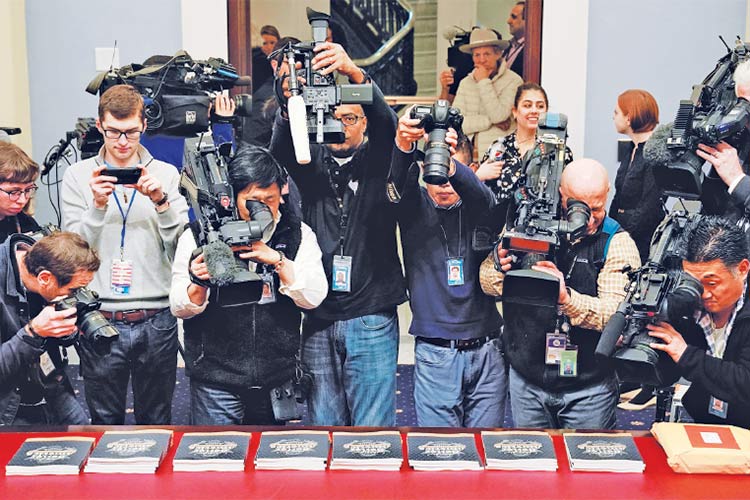 Members of the media point their cameras towards copies of Volume 1 of US President Donald Trump’s budget for Fiscal Year 2020 in Washington on Monday. Reuters

The deficit is projected to hit $1.1 trillion in the 2020 fiscal year, the highest in a decade. The administration is counting on robust growth, including from the Republican tax cuts — which Trump wants to make permanent — to push down the red ink. Some economists, though, say the bump from the tax cuts is waning, and they project slower growth in coming years. The national debt is $22 trillion.

Even with his own projections, Trump’s budget would not come into balance for a decade and a half, rather than the traditional hope of balancing in 10.

Presidential budgets tend to be seen as aspirational blueprints, rarely becoming enacted policy, and Trump’s proposal for the new fiscal year, which begins Oct.1, sets up a showdown with Congress over priorities, including his push for $8.6 billion to build the US-Mexico border wall.

Despite the large projected deficits, Vought said the administration has “prioritized reining in reckless Washington spending” and shows “we can return to fiscal sanity.” Perhaps most notably among spending proposals, Trump is reviving his border wall fight. Fresh off the longest government shutdown in history, his 2020 plan shows he is eager to confront Congress again over the wall.

Speaking on CNBC Monday, Vought confirmed the $8.6 billion border request. He said “the border situation is deteriorating by the day” with “record numbers of apprehensions.” An administration official said Trump’s budget proposes increasing defense spending to $750 billion — and building the new Space Force as a military branch — while reducing nondefense accounts by 5 per cent, with cuts recommended to economic safety-net programs used by many Americans. The $2.7 trillion in proposed spending cuts is higher than any administration in history, they say.

The budget includes work requirements for those receiving food stamps and other government aid as part of the $2.7 trillion in non-defense cuts over the decade.

The plan sticks to budget caps that both parties have routinely broken in recent years. To stay within the caps, the budget shifts a portion of the defense spending, some $165 billion, to an overseas contingency fund, which some fiscal hawks will view as an accounting gimmick.

Conservatives railed for years against deficits that rose during the first years of Barack Obama’s administration as tax revenue plummeted and spending increased during the Great Recession.

By refusing to raise the budget caps, Trump is signaling a fight ahead. The president has resisted big, bipartisan budget deals that break the caps — threatening to veto one last year — but Congress will need to find agreement on spending levels to avoid another federal shutdown in the fall.

The Democratic chairman of the House Budget Committee, Rep. John Yarmuth of Kentucky, called the proposed cuts to essential services “dangerous.” He said Trump added nearly $2 trillion to deficits with the GOP’s “tax cuts for the wealthy and large corporations, and now it appears his budget asks the American people to pay the price,” the Democrat said.

While pushing down spending in some areas, including the Environmental Protection Agency, the proposal will seek to increase funding in others to align with the president’s priorities, according to one official.

The administration will invest more than $80 billion for veterans services, a nearly 10 per cent increase from current levels, including “significant” investments in rehabilitation, employment assistance and suicide prevention.

It will also increase resources to fight the opioid epidemic with money for prevention, treatment, research and recovery, the administration said. And it seeks to shift some federal student loan costs to colleges and universities.

The proposal will also include $1 billion for a child care fund that would seek to improve access to care for underserved populations, a White House official confirmed. The one-time allocation is championed by the president’s daughter Ivanka Trump, who has focused on economic advancement for women in her role as a White House adviser.