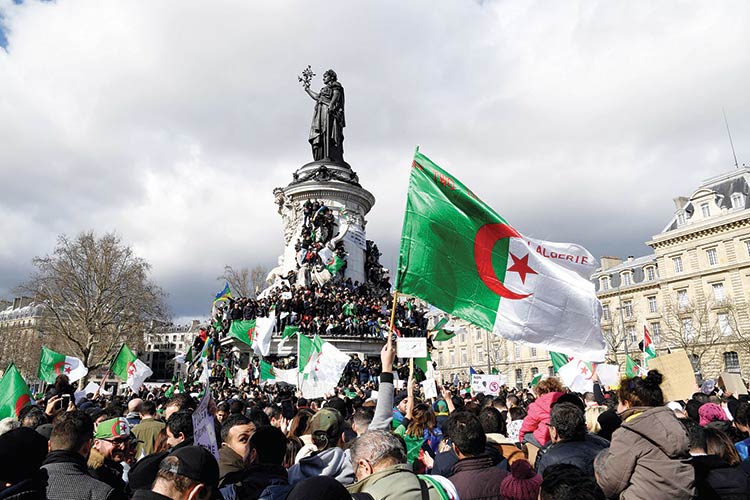 Paris: Thousands of Algerian-origin protesters demonstrated in Paris and other cities around France on Sunday against President Abdelaziz Bouteflika, calling on him not to seek another term in office.

Several thousand gathered for the second weekend in a row at the Republique square in central Paris, while there were other smaller demonstrations in regional cities Marseille and Bordeaux.

“We need to get rid of the system,” 24-year-old protester Ahmed Eddaidj, who was wrapped in the an Algerian flag, told AFP in Paris.

The student, who has been in France for four years, added: “I’d like to go back to Algeria, but there’s no work. We’re looking for a better life.”

Rachid Nekkaz -- a businessman and political activist opposed to Bouteflika -- was among those in Paris on Sunday after he was released by Swiss police.

Nekkaz, who was arrested on Friday at a Geneva hospital where Bouteflika has been receiving treatment, was carried briefly on the shoulders of a group of demonstrators.

France, which ruled Algeria for more than 100 years as a colonial power, is home to the largest population of Algerian-origin people outside of the north African country.

Around 1.7 million people of Algerian origin are estimated to live in France, according to national statistics agency INSEE.

Some members of the diaspora want French President Emmanuel Macron to take a firmer stand in support of the peaceful protests against ailing 82-year-old Bouteflika which began more than a fortnight ago.

But the Paris government is wary about being seen to interfere in its former territory and has been extremely cautious in its statements.

Opposition figure Ali Benflis, a former prime minister of Bouteflika who has called for him to step aside after 20 years in power, urged France to stay out of the crisis.

“France is a major power that we respect as an associate and a partner, but Algeria’s problems cannot be resolved from the outside and no-one should interfere,” he told the Journal du Dimanche newspaper in an interview.

One of Macron’s close political allies, Francois Bayrou, called the peaceful demonstrations an “Algerian Spring” on Sunday and said it was “in many ways exemplary and essential.”