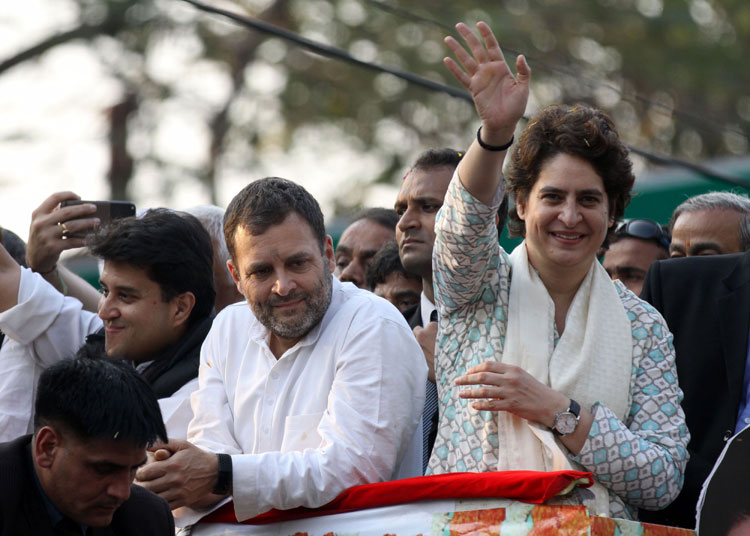 Rahul Gandhi looks on at a political rally as Priyanka Gandhi Vadra waves to supporters in Lucknow, recently. Agence France-Presse

NEW DELHI: Hours after a video of fugitive diamantaire Nirav Modi surfaced, Congress President Rahul Gandhi hit out at Prime Minister Narendra Modi saying that the video shows “uncanny similarities” between the two as “both believe they are above law.”

“The video of fugitive Nirav Modi in London shows an uncanny similarity between him and his ‘bhai’ (brother) PM Modi. Both have looted India and are called Modi. Both refuse to answer any questions. Both believe they are above the law. Both will face justice,” Gandhi said in a tweet attaching the video of the absconding diamantaire posted by the UK-based newspaper The Telegraph.

His remarks came after the British newspaper claimed that Modi has been spotted in London.

Earlier, a video released by The Telegraph showed Nirav Modi walking the London streets. He sported a new look − handle-bar moustache and long hair − and is seen avoiding questions posed to him, saying “no comments.”

The newspaper report also claimed that Modi, against whom a red corner notice has been issued by the Interpol, has been living in the city’s West End area and has even started a new diamond business. An extradition request against him has been pending with the UK authorities since September 2018.

Earlier in the day, Congress spokesperson Randeep Singh Surjewala also lashed out at the Bharatiya Janata Party (BJP)-led central government for its “failure” to bring the fugitive diamantaire back while he apparently thrives elsewhere.

“Today (Saturday), fugitive diamantaire ‘chota Modi’ Nirav Modi has been traced to London − living a luxurious life in a Rs 75-crore flat and wearing a jacket worth 10,000 British Pound.

“Is it right, (Narendra) Modiji? First rob Rs 23,000 crore from the banks, escape the country without any problem and then ridicule the investigative agencies like the CBI and the ED? “Impossible is possible under Modi. It seems that Modiji is running Bank Fraudster Settlement Company. In five years, Rs 1 lakh crore has been robbed by the fugitives and you were unable to catch them.

“You promised to bring back Rs 80,000 crore black money but instead you allowed Rs 1 lakh crore to be robbed from the banks. It is because Modi hai to mumkin hai (Impossible is possible, under Modi),” he said.