New members of ADEC sworn in before Mohamed - GulfToday

New members of ADEC sworn in before Mohamed 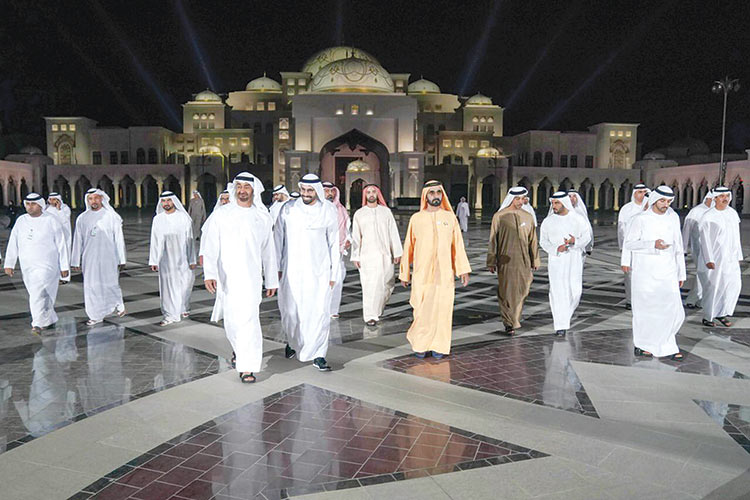 Sheikh Mohammed and Sheikh Mohamed Bin Zayed attend the opening of the National Palace within the Presidential Palace complex.

The new members of the Abu Dhabi Executive Council have been sworn in before His Highness Sheikh Mohamed Bin Zayed Al Nahyan, Crown Prince of Abu Dhabi and Deputy Supreme Commander of the UAE Armed Forces.

Sheikh Mohamed congratulated the new members on the trust placed in their capabilities by the country’s leadership and wished them success and teamwork spirit in their endeavours to achieve the aspired national developmental objectives.

Sheikh Mohamed thanked the former members of the council for the efforts they had made to drive the growth of Abu Dhabi.

The Abu Dhabi Crown Prince affirmed the continued development of governmental work across the emirate and consolidation of institutional values based on distinguished performance, innovation, creativity, elasticity and teamwork spirit.

“Under the leadership of President His Highness Sheikh Khalifa Bin Zayed Al Nahyan, the UAE is forging ahead with underpinning the pillars of comprehensive and sustainable development at the economic, social, political and cultural levels,” he said, noting that aspiring for progress and prosperity is the right of all countries that boast strong will and determination, best utilise science and knowledge and invest in the unlimited potential of their people.

“We are seeking to secure a paradigm shift at the governmental work and service levels provided by various departments in order to drive growth and elevate our nation to advanced rankings across various developmental and competiveness indices,” he added.

A group photo was taken for Sheikh Mohamed along with the new members of the Abu Dhabi Executive Council.

Separately, Sheikh Mohamed called President Ali Bongo Ondimba of Gabon to inquire about his health and congratulate him on his recovery.

For his part, President Ali Bongo thanked Sheikh Mohamed for his noble feelings and expressed his wishes for further progress and prosperity to the leadership and people of the UAE.

In a phone call, the Abu Dhabi  Crown Prince conveyed to the Senegalese President the greetings of Sheikh Khalifa and his best wishes for continued progress.

Sheikh Mohamed underlined the UAE’s determination to boost bonds of friendship and cooperation between the two nations and their peoples.

The Senegalese president expressed sincere appreciation to Sheikh Mohamed and wished continued prosperity to the UAE leadership and people.

Sheikh Mohamed exchanged views on the latest regional and global developments with Sebastian Kurz, the Chancellor of Austria, during a telephone call on Wednesday from the European leader.

Sheikh Mohamed and the Austrian Chancellor discussed ways of fostering coordination over areas of mutual interests in addition to an array of issues of common interest.

Over a phone call, Sheikh Mohamed conveyed the regards of Sheikh Khalifa and his wishes for more progress and prosperity to Nigeria.