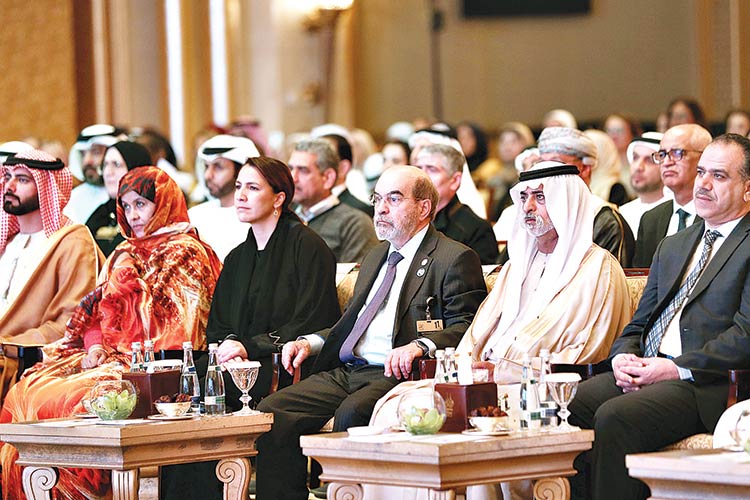 Shiekh Nahyan and other officials attend the Date Palm awards in Abu Dhabi.

The award held annually recognises institutions, authorities, international organisations and pioneer companies for their best practices in the field of date palm agriculture and agricultural innovation around the world.

Sheikh Nahyan Bin Mabarak Al Nahayan, Chairman of Board of Trustees, KIADPAI, along with Dr José Graziano da Silva, Director General, FAO, handed out the different categories of the award to the winners.

For the category of distinguished innovative studies and modern technology, the award was jointly given to Dr Mark Alfred Tester from King Abdullah University of Science and Technology in KSA and Dr Huda Badri Mohamed Ali from Germany.

Moreover, Groasis Company from Netherlands received the award for the category of pioneering and sophisticated innovations serving the agricultural sector.

In the category of influential figure in the field of date palm and agricultural innovation, the award was jointly given to Dr Julian Schroeder, from USA and Dr Abdel Baset Oda Ibrahim from Iraq.

The winners of the Distinguished and Innovative Farmer Award organised by the Secretariat General of KIADPAI, in cooperation with Al FOAH Company were also honoured by Sheikh Nahayan.

In the category of Above Medium Scale Farmer, it was Khalifa Abdullah Khamis Mohamed Al Mazrouei and Mohamed Said Salim Gaaed Al Qubaisi.

While in the category of Big Scale Farmer, it was Sultan Said Mahd Sultan Al Ariany and Mohamed Ali Morshed Al Marar.

Dr da Silva, praised the efforts of UAE in supporting and developing the agricultural sector at an international level, in particular the date palm planting and date production.

“Thanks to its developed infrastructure and institutions, international expertise and strong will that contributed to promote the date palm tree sector, especially through the date festivals in the Arab world,” he said. Dr da Silva also praised the remarkable success of the conference that aimed at creating an international trust fund to combat the red palm weevil within a strategy in which the member states take part.

Sheikh Nahyan, also delivered a speech in which it referred to the achievements of the award within a decade, that exceeded all expectations and contributed to reinforcing the leading position of UAE in developing and ameliorating the date palm tree and agricultural innovation sector all around the world.

The Minister praised the outcomes of the Conference of Agricultural Ministers of the Date Producing and Processing Countries organised by the Award in cooperation with Ministry of Climate Change and Environment, and the Food and Agriculture Organization (FAO) of the United Nations, such as developing a framework strategy to eradicate the red palm weevil.

The ceremony held under the patronage of Sheikh Mansour Bin Zayed Al Nahyan, Deputy Prime Minister and Minister of Presidential Affairs showcased a documentary titled “A Date Dream” which highlighted the journey of development and evolution witnessed by UAE in the agricultural sector that was led by Sheikh Zayed Bin Sultan Al Nahyan who focused on date palms as a key pillar for the sustainable development and food security, and as part of the Emirati identity.

In addition, some national and international figures who contributed in the development of agricultural sector and the cultivation and production of date palm in the world were also honoured during the ceremony.