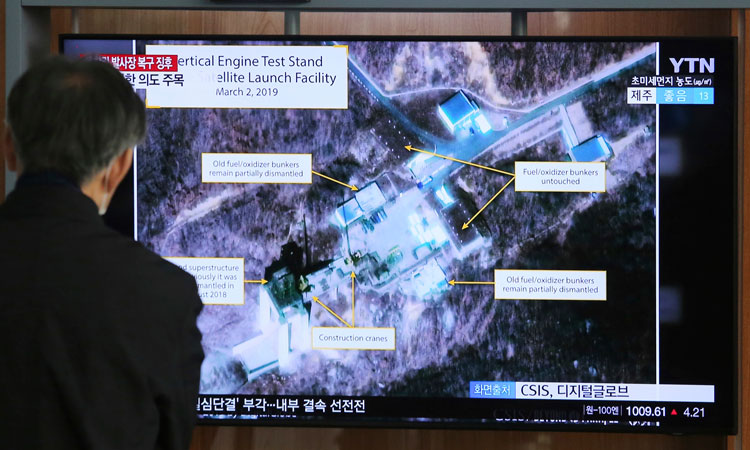 SEOUL: North Korea may be preparing for a missile or space launch, US news outlet NPR has reported, based on satellite image analysis of a key facility near Pyongyang.

NPR said the images of Sanumdong, one of the facilities Pyongyang has used to produce inter-continental ballistic missiles and space rockets, were taken days before US President Donald Trump and North Korean leader Kim Jong Un met in Hanoi for their high-stakes summit, which ended in failure.

Meanwhile, Trump said he would be disappointed if Pyongyang were to resume weapons testing and reiterated his belief in his good relationship with North Korean leader Kim Jong Un despite the collapse last week of their second summit.

"I would be surprised in a negative way if he did anything that was not per our understanding. But we'll see what happens," Trump told reporters. "I would be very disappointed if I saw testing."

The photos by the firm DigitalGlobe show the presence of cars and trucks at the site on Feb.22, said NPR - which has exclusive access to the imagery.

It added that rail cars and cranes can also be seen at a yard.

"When you put all that together, that's really what it looks like when the North Koreans are in the process of building a rocket," Jeffrey Lewis, a researcher at the Middlebury Institute of International Studies at Monterey, was quoted as saying by NPR on Friday.

"I would be surprised in a negative way if he did anything that was not per our understanding. But we'll see what happens. I would be very disappointed if I saw testing.

The Sanumdong analysis comes days after the specialised website 38 North and the Center for Strategic and International Studies said Pyongyang may have resumed operations at its long-range rocket launch site at Sohae, based on their study of satellite imagery from March 6.

The development is likely to further compound Washington's frustration over the lack of progress in its bid to get the North to give up its atomic arsenal, especially after the Feb.27-28 summit between Trump and Kim collapsed without so much as a joint statement - let alone an agreement on nuclear disarmament.

According to senior US officials, in the week leading up to the Hanoi summit, the North Koreans had demanded the lifting of effectively all UN Security Council economic sanctions imposed on Pyongyang since March 2016.

In return, Pyongyang offered only to close part of the Yongbyon complex, a sprawling site covering multiple facilities. The North is also believed to have other uranium enrichment plants.

Trump said on Friday that his relationship with Kim "remains good," despite the setback in Hanoi.

US officials have said Washington believes the "final, fully verified denuclearisation" of North Korea is still possible by the end of Trump's first term.

"With the positive developments in the past year 2018, it is all the more regrettable that the serious human rights situation on the ground in the Democratic People’s Republic of Korea remains unchanged," Tomas Ojea Quintana, UN special rapporteur for human rights in the DPRK, said in his latest report.

Quintana said that he hoped the summit's abrupt end "doesn’t compromise the peaceful environment for dialogue that all the parties have been working for during 2018."