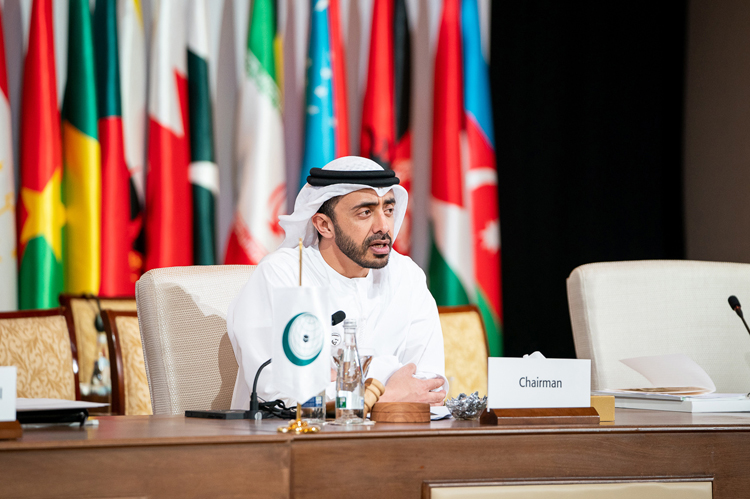 ABU DHABI: Sheikh Abdullah Bin Zayed Al Nahyan, Minister of Foreign Affairs and International Cooperation, has reaffirmed that the Palestinian issue is a central to both the Arab and the Muslim nations, stressing ongoing efforts to reach a comprehensive and permanent solution and to establish an independent Palestinian State according to the borders of June 4, 1967, with East Jerusalem as its capital, in accordance with the decisions of international legitimacy and the Arab Peace Initiative.

He added that the OIC, since its first day of establishment, aimed to support and serve the Palestinian issue, especially the issue of Al-Quds Al-Sharif, and "We are committed to the Arab Peace Initiative, which has received support from Arab countries and globally." In a press conference at the conclusion of the Forty-Sixth Session of the Council of Foreign Ministers (CFM) of Member States of the OIC held in Abu Dhabi over the last two days, Sheikh Abdullah underscored that the UAE is committed to support the United Nations Relief and Works Agency for Palestine Refugees in the Near East (UNRWA), and invite the international community to fulfil its commitments regarding the Palestinian issue and Palestinian refugees.

He said, "I congratulate everyone on all the outcomes of our meeting, which will enable the Muslim world to overcome its crises and secure a brighter future for our peoples." 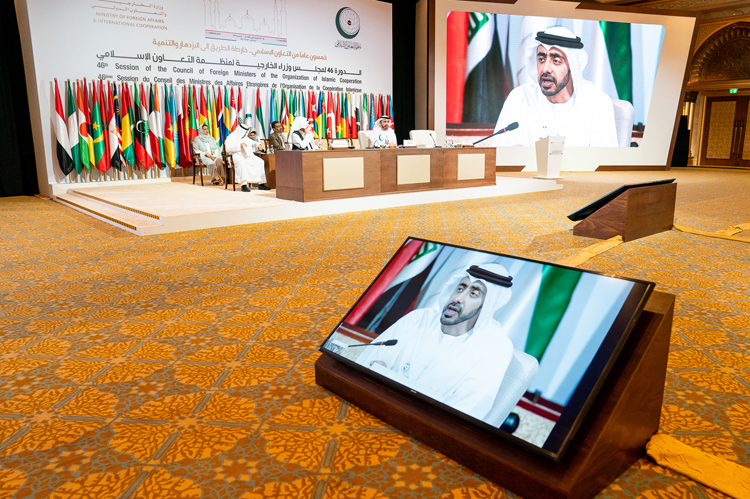 He added that, ' Today, we decided to mark the year 2019 as a golden jubilee of the 50th anniversary of the OIC, in order to enhance its presence as an international organisation and an effective partner in the stabilisation of peace, security and development in the world.

He also welcome the OIC's resolution to mark the golden jubilee of the OIC that recognises Saudi Arabia's generous support and cooperation, during all these decades, as it is a real opportunity for this organisation to flourish and grow not only in the joint action field, but also in the service of the peoples of the member states through a number of cultural, social, humanitarian and development institutions.

Sheikh Abdullah said, "We call upon the member states to translate into concrete reality the implementation of the Decennial Programme of Action to 2025, and praise the resolution of the member states to dedicate the 19th of Ramadan of each year a day, which coincides with the anniversary of the late Sheikh Zayed bin Sultan Al Nahyan, to celebrate volunteering work in the Muslim World and promote the concepts of volunteering, especially among the youth.''

He added that OIC Charter affirms the commitment to respect the security, sovereignty, independence and territorial integrity of member states.

''We believe that all kinds of interference in the internal affairs of countries violates the international law rules and the principle of state sovereignty as well as that of the OIC.

The UAE Minister of Foreign Affairs and International Cooperation said, "We would like to express our deep concern about Iranian interference in the internal affairs of countries through sectarian rhetoric and political, military and cultural intervention that undermines security and stability and fuel sectarian conflicts in our region."

Sheikh Abdullah said, "I reaffirm the collective stance of the member states against terrorism in all its forms and manifestations. We are concerned about the threat posed by extremist and terrorist groups to the stability, security and territorial integrity of member states. We affirm the importance of developing the necessary legal and legislative measures to counter this scourge."

We are committed to the Arab Peace Initiative, which has received support from Arab countries and globally.

He emphasised that combating discrimination, hatred speech, incitement and criminalising actions related to disdaining religions and sanctities, combating all forms of discrimination, rejecting hate speech, criminalising discrimination between individuals and groups based on religion, belief, rite, faith, sect, race, colour or ethnic origin is a main pillar of ''our religion'' and these issues should be despised and I believe that they must be encountered with deterrent actions.

Sheikh Abdullah emphasised the importance of empowering women, not only because it is their right but also as a way towards development.

''We recall the importance of carrying out the OIC plan of action for women empowerment and its implementation mechanisms, including eliminating discrimination against them or exploiting them that leads to poverty or bad health conditions. We also believe that enhancing the role of women is an objective that deserves support, focus and work towards safe, resilient and developing societies,'' he reiterated.

Answering a question about OIC' support for the UNRWA, Sheikh Abdullah said he recently met with the UNRWA director and spoke with him about challenges facing the UN agency. ''We are delighted to see increasing activities and work with the OIC over the recent years.''

We are delighted to see increasing activities and work with the OIC over the recent years.'

He pointed out that the OIC had been the key financier to reduce UNRWA's budget shortfall last year after the US withdrawal of its funding.

''More work with the OIC is imperative so as to help our Palestinian brothers avoid more problems and to protect them from exploitation by a ''band'' seeking to change the approach and path of the Palestinian people, who have been struggling for decades to end the Israeli occupation and establish their state,'' Sheikh Abdullah added.

Regarding a proposed plan by the US administration concerning the Palestinian Cause, the UAE foreign minister said,'' We cannot reply to a proposal that we did not see.''

On interference by some states on the internal affairs of OIC member states, Sheikh Abdullah said Interference breaches both the UN and OIC charters, noting that states solve their disputes politically and ''We hope that states which respect their commitments would reach a conviction that this process serves both its environment and its own interest.''

''We in the UAE call on Iran to reconsider its policies and strategic vision. Does it want to be a stabilsing factor for peace and stability or a one for corruption, chaos and destruction?.''

On the return of Syria to the Arab fold, he said, 'The issue needs a resolution from the Arab League and I don't see any draft resolution ahead of the Arab Summit.''