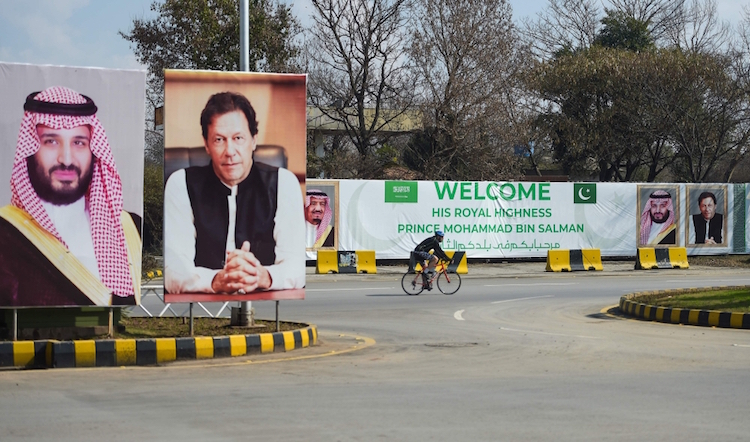 A man rides past billboards showing portraits of Saudi Arabia Crown Prince Mohammed Bin Salman and Pakistan's Prime Minister Imran Khan and a banner welcoming the prince ahead of his arrival in Islamabad. Agence France-Presse

ISLAMABAD: Saudi Crown Prince Mohammad Bin Salman's visit to Pakistan that was scheduled to start on Saturday, has been cut short by a day rescheduled for Sunday-Monday, the Pakistan Foreign Office has said.

Following which the Islamabad-based Board of Investment, which reports to Prime Minister Imran Khan, in a statement to invitees said the Pakistan-Saudi businesses conference scheduled on Feb.17 has been postponed.

"Any inconvenience caused in this regard is highly regretted. The new dates of the meeting will be informed in due course of time," it said.

The development came barely 48 hours after some 49 CRPF troopers died in a suicide attack by the Pakistan-based Jaish-e-Mohammed, whose chief Masood Azhar roams freely on Pakistan soil and was yet to be designated a global terrorist.

The Crown Prince is visiting at the invitation of Pakistan prime minister.

He would be accompanied by a high-powered delegation including members of the Saudi Royal family and key ministers on Sunday, the News International said.

Pakistan Foreign Office Spokesperson Mohammad Faisal earlier had said Saudi-Pakistan Supreme Coordination Council (SCC), led by Salman and Khan will be launched during the visit of the Crown Prince.