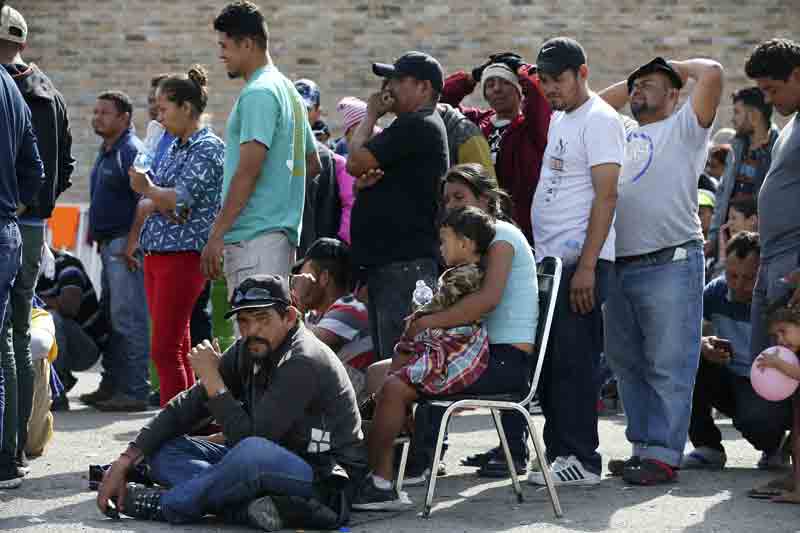 NUEVO LAREDO: Around 1,700 migrants traveling by caravan reached the US-Mexican border on Tuesday, just as President Donald Trump prepared to give a major speech certain to include calls for his long-sought wall.

The Central American migrants, mostly Hondurans, arrived in the city of Piedras Negras, Coahuila, across the border from Eagle Pass, Texas.

The local mayor, Claudio Bres Garza, said the city would welcome “all those who behave themselves,” after Coahuila’s Governor Miguel Angel Riquelme vowed not to accept more undocumented migrants in the state.

Their arrival came as Trump was set to deliver his annual State of the Union address, with the issue of border security center stage after a record five-week government shutdown triggered by his spat with Congress over funding for his promised wall.

“Tremendous numbers of people are coming up through Mexico in the hopes of flooding our Southern Border. We have sent additional military. We will build a Human Wall if necessary. If we had a real Wall, this would be a non-event!” Trump tweeted on Tuesday morning.

Authorities in Piedras Negras converted several old factory buildings into shelters to house the migrants. Women and children will sleep separately from the men, they said.

The migrants were part of a group of around 2,200 who began their journey on Jan.15 in Honduras. Around 500 of the caravan’s original members decided to accept the Mexican government’s offer of humanitarian visas to remain in Mexico and work for up to a year.

Another group of around 3,800 migrants is in southern Mexico, in the state of Chiapas. They planned to regroup Wednesday and then continue their northward trek.

Several thousand Central Americans have trekked across Mexico by caravan since last year, fleeing poverty and violence in their home countries.

They travel en masse in hopes of finding safety in numbers against Mexican gangs that regularly extort, kidnap and kill migrants, sometimes in collusion with local authorities.