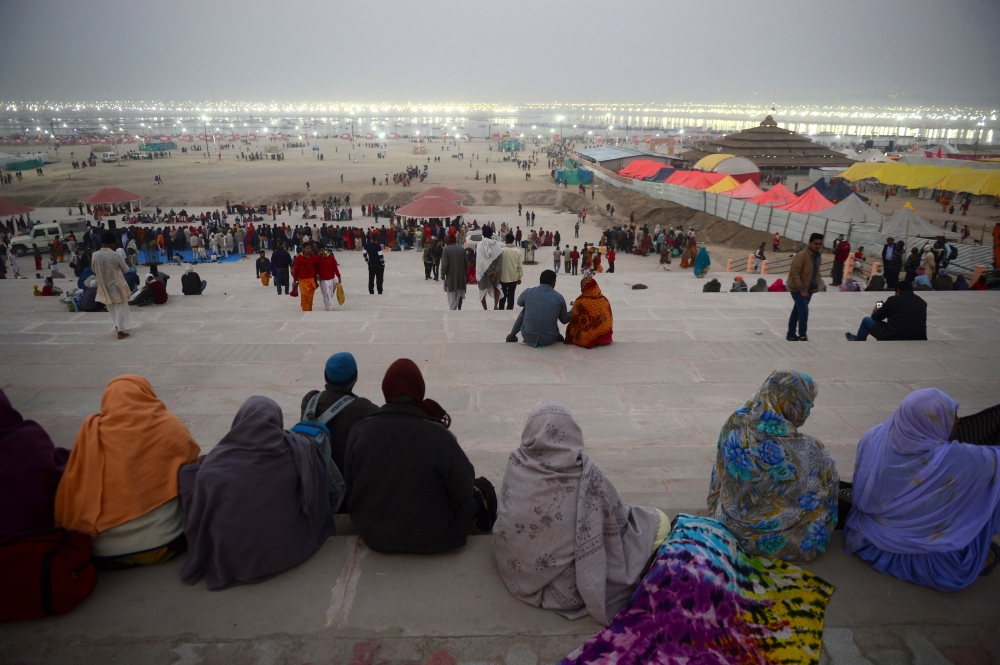 Pilgrims arrive at the Sangam, the confluence of the Rivers Ganges, Yamuna and mythical Saraswati on eve of the most auspicious day of 'Mauni Amavasya' during the Kumbh Mela festival in Allahabad, India, on Monday. Agence France-Presse

ALLAHABAD: Millions of Hindu pilgrims took the plunge into sacred rivers at the world's largest religious gathering on Monday, led by ash-smeared holy men and accompanied by religious chanting.
On the most auspicious day of the months-long Kumbh Mela festival, devotees rose at dawn in the northern city of Allahabad to immerse themselves at the confluence of three rivers -- the Ganges, the Yamuna, and the mythical Saraswati.
Thousands of Naga Sadhus, a devout, fierce and famously nude sect of followers of the Hindu god Shiv, and other holy men clad in saffron robes, led the mass bathing in the chilly waters, some brandishing swords and tridents.
Hindus believe that bathing in the sacred rivers cleanses them of sin and Monday's Mauni Amavasya Snan -- the "no moon day" -- is considered the holiest of the gigantic 48-day festival that runs until March 4.
More than 30,000 police were on duty to manage the huge crowds and prevent the deadly stampedes that have marred previous gatherings.
Authorities have spent about $40 million on an operation to block drains and make sure others undergo special cleansing so that waste water pouring into the rivers does not threaten the pilgrims.
Special skimmer boats collected waste from the surface of the rivers and more than 40,000 temporary toilets have been installed.
Pilgrims have been streaming into a temporary tent city -- three times the size of Manhattan island -- in buses, trains and cars to participate in the festival's high point.
The confluence of the three rivers is considered especially holy and Hindus believe bathing there during the Kumbh helps cleanse sins and bring salvation.
Nearly 12 million people attended the inaugural bathing ritual on January 15 and about 120 million are expected during the whole festival.
Devotees meditate on the banks of the rivers after the dip and collect Ganges water in cans to take home. Many observe complete silence for the rest of the day after their ritual bath.
According to Hindu mythology, gods and demons fought a war over a sacred pitcher, or kumbh, containing the nectar of immortality.
During the clashes, a few drops fell to earth at four different locations -- one being Allahabad.
The historic city was recently renamed Prayagraj by the state's Hindu government but is still widely known as Allahabad, the name it was given by Muslim rulers hundreds of years ago.