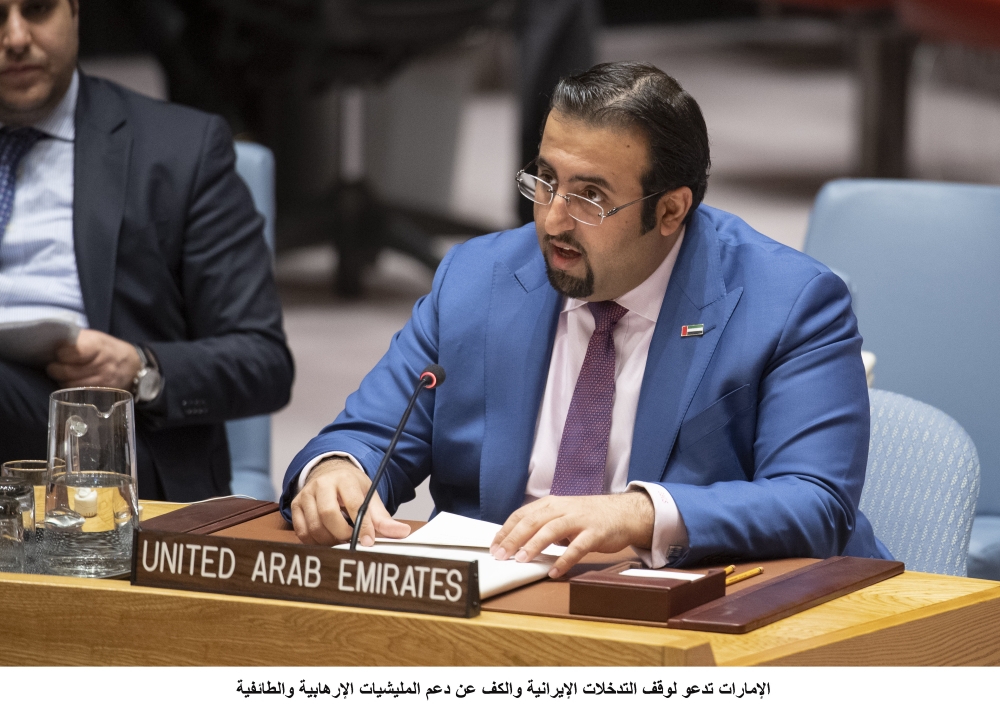 UAE envoy at the United Nations in New York.


NEW YORK: The UAE has condemned Iran’s interference in the Middle East, accusing Iran of creating more tension and instability in the region and posing a serious threat to the stability of the Middle East. Thus, the UAE called on the international community and the Security Council to seriously pressure Iran to end its interference and support for terrorist and sectarian militias in Arab countries.

At the UN Security Council’s quarterly Open Debate on the situation in the Middle East, including the Palestinian question, Saud Al Shamsi, Deputy Permanent Representative of the UAE to the UN, delivered the UAE’s statement at the debate, saying, "The conflicts in Yemen and Syria clearly show that Iran is the common perpetrator. Iran has created more tension and instability in our region, posing a serious threat to the stability of the Middle East. We therefore call on the international community and the Security Council to seriously pressure Iran to end its interference and support for terrorist and sectarian militias in Arab countries."

On the situation in Yemen, Mr. Al Shamsi reaffirmed the UAE’s commitment to supporting the work of Martin Griffiths, Special Envoy of the Secretary-General on Yemen, and the UN-sponsored political process for a lasting and sustainable political settlement. However, he noted that while the UAE and the Coalition to Support Legitimacy in Yemen have proven their commitment to the Stockholm Agreement on Hodeidah and relevant Security Council resolutions, the Iranian-backed Houthis have repeatedly violated the agreement and relevant resolutions. These transgressions include heinous crimes against the Yemeni people, threats to the security and stability of neighbouring states and international navigation, and looting of humanitarian aid. To this end, he called on the Security Council to take firm and decisive action against the Houthis.

Mr. Al Shamsi also highlighted Iran’s negative and destabilising influence in Syria, noting that it obstructs any possibility of a political solution for the Syrian people. He stressed that an Arab regional solution was pivotal to resolving the conflict.

He also reiterated the UAE’s commitment to the Palestinian cause and called on Israel to stop its illegal practices against the Palestinian people, which are undermining the two-state solution. He underscored the UAE’s historic and continued support for the UN Relief and Works Agency for Palestine Refugees in the Near East (UNRWA) and its humanitarian work. Between 2017-2018, the UAE provided upwards of US$173 million to support UNRWA.

On the Libyan issue, Mr. Al Shamsi welcomed the progress achieved through the implementation of the UN Action Plan, which represents a viable framework for resolving the political crisis. However, he expressed concern for the growing threat posed by terrorist groups in Libya and emphasised the vital need for international efforts to restore security and stability in Libya.

Mr. Al Shamsi concluded, "The international community, especially the Security Council, must address those parties that continue to undermine regional stability and peaceful coexistence so that the region can invest its energies and resources in building peaceful, prosperous, and tolerant societies free from conflict, violence, and terrorism."