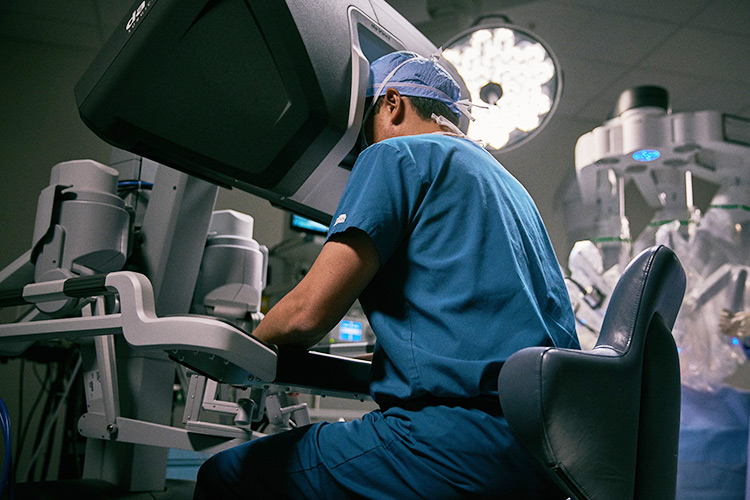 A doctor oversees a robotic procedure administered on a patient.

She was recently diagnosed to have three tumours in the left lobe of the liver on routine scans done at another hospital. These tumours were thought to be metastasis from her primary colorectal cancer. She was subsequently referred to Mediclinic City Hospital for further management.

She was evaluated by the Hepatobiliary team at Mediclinic City Hospital and her case was discussed at the GI cancer multidisciplinary team meeting.

This is a meeting where all the different specialists dealing with gastrointestinal cancers meet every week to design a treatment plan for each individual patient.

At this meeting a liver resection for management of these colorectal liver metastasis was recommended. It was decided that since she had multiple lesions in the left half of the liver, it would be advisable to perform a formal left lobe liver resection. This would require removal of four out of the eight segments of the liver.

Liver resection is a complex surgery since the liver is close to major blood vessels and has the potential to cause significant blood loss. Therfore, liver resection is best performed in specialised centres by a specially trained surgical team.

The liver is the only solid organ in the body that has the ability to regenerate after a surgical resection and, if necessary, it may be possible to remove 60-70% of the liver dependent on the patient’s condition. After a liver resection, the liver returns to nearly its normal size within six to eight weeks following the surgery.

The liver team at Mediclinic City Hospital are trained and experienced in performing such liver resections.

“After evaluating the patient and studying the CT and MRI scans, we decided to proceed with a robotic liver resection. Traditionally liver resections are done by the open method and involve a large incision on the abdomen. This would be followed by a stay of seven to 10 days in the hospital including one to two days in the ICU,” explained Dr. Hemant Vadeyar, Consultant Hepatobiliary Surgeon at Mediclinic City Hospital.

He further explained the use of the da Vinci robot for liver resections, “The da Vinci surgical robot enables surgeons to perform this complex procedure using small incisions and a minimally invasive method with reduction in the blood loss and reduced ICU and hospital stay.”

The patient did not need any blood transfusion and made a good recovery. Since she had only small incisions, she required minimal painkillers.

Her liver functions recovered very quickly and she was ready to be discharged after three days in the hospital.
Subsequently she has continued to do well and has made a full recovery from the surgery.