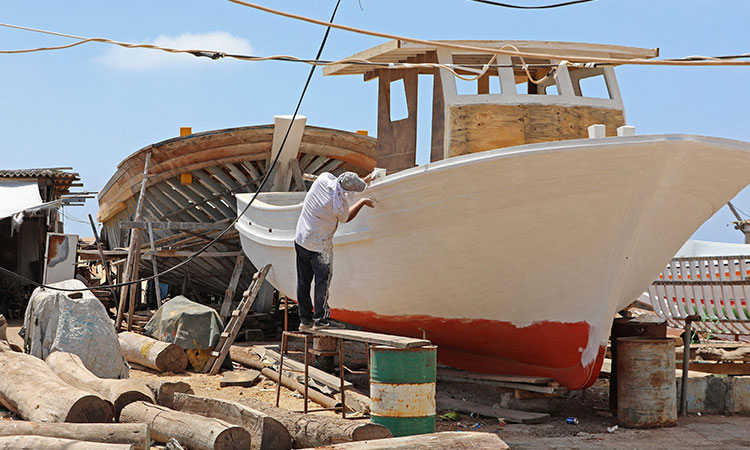 A member of the Bahlawan family paints a boat at their boatyard in Syria's Mediterranean Island. AFP

Khaled Bahlawan hammers nails into a traditional wooden boat he built by hand, toiling under the scorching sun on Syria's Mediterranean coast to preserve a disappearing ancient skill.

"We are the last family that makes wooden ships and boats in Syria," said the 39-year-old on the shores of Arwad Island, near the city of Tartus.

"This is the legacy of our ancestors... We are fighting to preserve it every day".

Located about three kilometres (less than two miles) off the coast, Arwad is Syria's only inhabited island and a haven of peace in a country torn by 11 years of war.

Hundreds of workers, residents and visitors commute to and from there every day in wooden boats, mostly built by the Bahlawan family.

But demand for a craft that dates back to ancient Phoenician times has dropped to all but a trickle.

The eight members of the Bahlawan family now share the work, making boats for fishermen, resorts and passenger transport.

The tradition of building and repairing wooden boats has been in their family for hundreds of years. 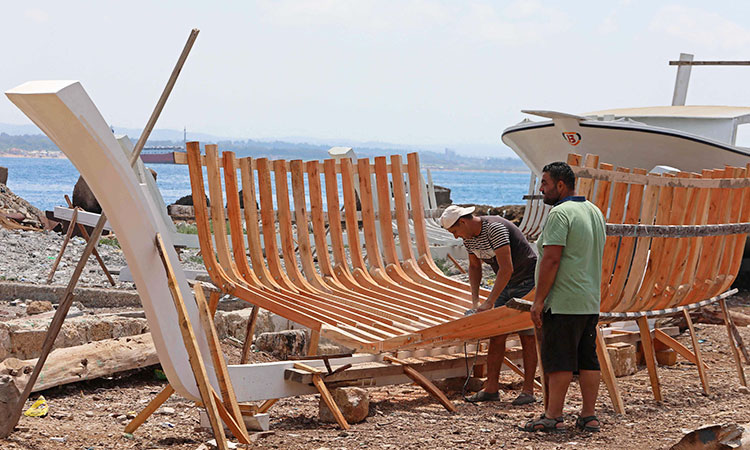 Long power cuts due to years of conflict mean that Bahlawan cannot use his electrical equipment.

Instead he works with his grandfather's manual tools, smoothing the wood by hand rather than with an electric plane.

"It's a hard task," he said, standing inside the hull of a boat and tapping each nail carefully.

He heads to his narrow, open-air workshop near the beach every day, despite the low demand and modest means.

"We are doing our best to overcome difficulties," said Bahlawan, his face covered in sweat and sporadic wood shavings.

Boat-building has been a village tradition since Phoenician times, said Noureddine Suleiman, who heads the Arwad municipality.

In the past, the majority of Arwad's residents were boat-makers, he said. 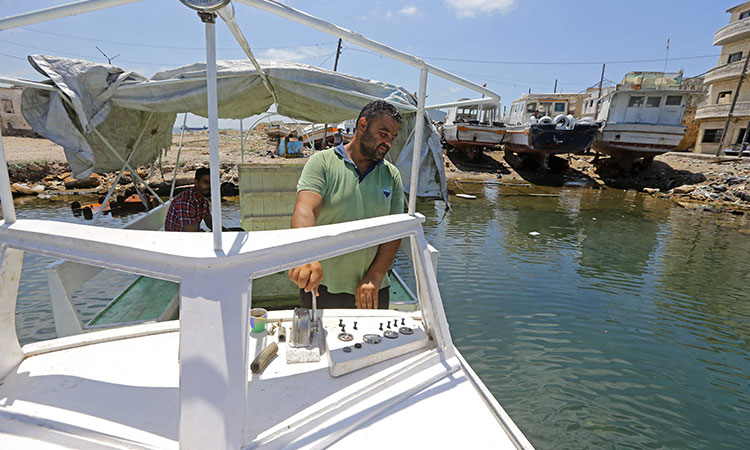 "Today, only the Bahlawan family remains," he said.

Thousands of years ago the Phoenicians, renowned for their ship and boat-making, laid the foundations of marine navigation.

The skilled sailors and traders roamed the seas, bringing their knowledge, craftsmanship and their alphabet to other parts of the Mediterranean.

Farouk Bahlawan, Khaled's uncle, said his family had preserved the original shape and structure of ancient Phoenician boats, with a few modifications.

"We mainly make ships from eucalyptus and mulberry wood from the Tartus forests," said the 54-year-old, a skilled carpenter.

Young children played hide-and-seek in the boats' hulls at the workshop, while an elderly man smoked in the shade of a large ship.

Close by, more than 40 wooden boats were moored at the Arwad port.

"We used to manufacture four big ships and several boats every year that we would export to Cyprus, Turkey and Lebanon," Farouk Bahlawan said.

"This year, we only worked on one ship, and it still needs a lot of work before it is done."

He gazed at the beach, where the children ran in the sand.

"We must continue this journey," he said, his voice welling up with emotion. "We bear a historic responsibility on our shoulders."