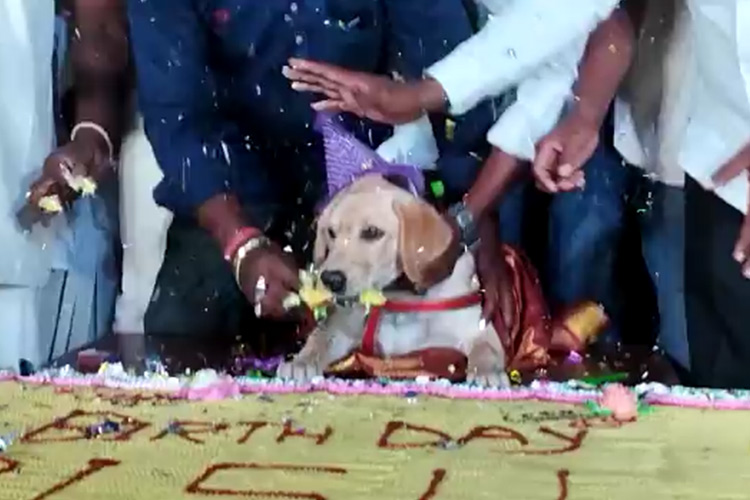 The dog ‘Krish’ eats a piece of cake during the birthday celebrations in Karnataka, India.

A video clip went viral on social media showing a man from Karnataka, India, hosting a massive birthday party for his dog " Krish."

Local media reported that 4,000 guests attended the ceremony, and a cake weighing 100 kilogrammes was cut in honour of the dog.

Shivappa Yellappa Maradi had a big birthday for his dog, as he wanted to make the event memorable.

The video of the event was viewed hundreds of times on social media platforms.

The video shows a huge cake on a table being cut by Maradi while Krish stands in the middle of the crowd and in front of his cake with a purple birthday hat on his head.

The footage showed the audience singing a birthday song before feeding a portion of the cake to the adorable dog.

The celebration took place in Tukkanatti village in Moodalagi Taluk of Belagavi district, Karnataka, on Wednesday.

The dog was taken out in a parade after the cake was cut. The people in the town had a great time and participated in the procession.

Mardi organised the birthday because a new member of the village made dismissive remarks, saying panchayat members ate like dogs while in office.

He thought that this was an adequate response to the comment.

The video received wide reactions on social media, and one of the followers commented: "Lucky dog Krish."

Another follower wrote: "This must be a stereotype of respect for animals, they are living creatures and have feelings and emotions."

A user with the name Elementalist wrote on Twitter, “He doesn't look happy or excited among so many people and the way he was lifted. This party wasn't for the dog. It was for the Man's image…”

Vevek Tandoan said, “Appreciate!! But kindly think sometimes about the hungry as well. The dog would have been happy with half kg cake.”

Bindu Kumari said, “If he feeds 100 street dogs with this money then it sounds good…”  

Nazir Mir wrote on Facebook, “An educated mad person does such acts. He had the option to feed hundred starving humans to make the event memorable… A shameful act.”