For Iraqis a sweltering summer of 'hell' has begun - GulfToday 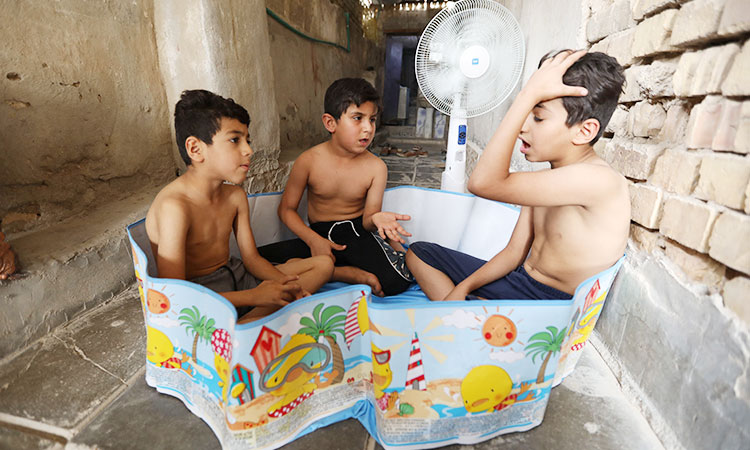 The sons of Nateq Khafaji sit in an empty pool next to a fan outside their home in Nasiriyah city. AFP

Umm Mohammed, 74, waves a fan back and forth to cool down, but in the blistering heat of Iraq's southern city of Basra there is nothing but stiflingly hot air.

"By God, we are tired," Umm Mohammed said faintly, adding that the heat had woken her up in the middle of the night. Just days into summer, the temperature in Basra has already soared to around 45˚C. Umm Mohammed's modest home has a flimsy sheet-metal roof that retains the sweltering heat.

Further north in the capital Baghdad, temperatures have already topped 50˚C — in the shade. 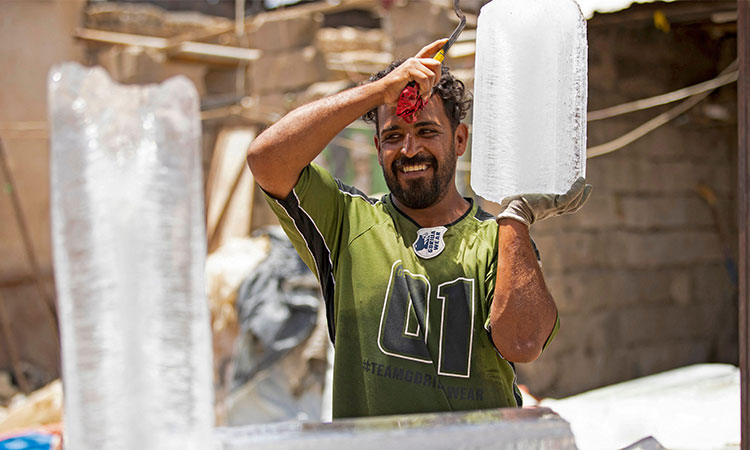 A man carries a block of ice at his stall in southern city of Basra. AFP

Battered by decades of conflict that has sapped its infrastructure, Iraq is struggling with droughts, repeated sandstorms, desertification and a drop in some river levels.

Chronic power cuts are exacerbated in the summer, and only those who can afford private generators are able to keep their fridges or air conditioning units running.

In Basra, high humidity compounds the oppressive heat. And with many Iraqis struggling to survive, spending around $105 dollars a month for a private generator is not an option. 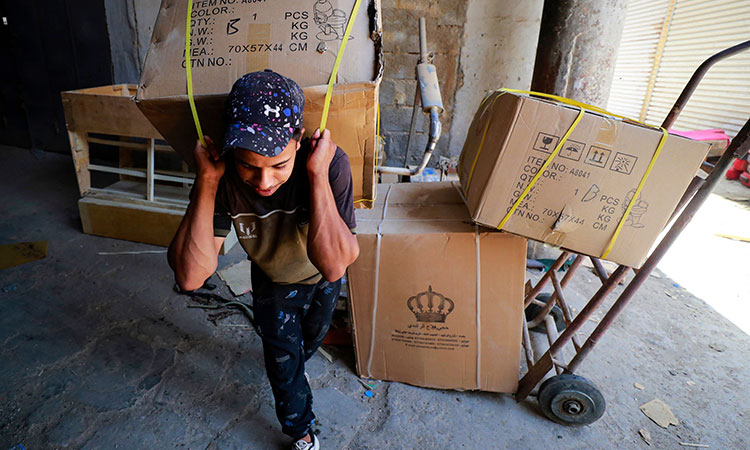 A young porter transports an order in the capital Baghdad. AFP

Referring to how the government treats its citizens, she said: "Even God does not agree to that."

Iraq is the second-largest oil producer in the OPEC cartel. But the once thriving country has for years bought gas from neighbouring Iran, which supplies about one-third of its power sector needs.

US sanctions on Iranian oil and gas have complicated Baghdad's payments for the imports, leaving Iraq in heavy arrears and prompting Tehran to periodically switch off the taps.

The result is longer power cuts for most of Iraq's 41-million-strong population, many of whom blame politicians and endemic corruption for their plight.

Anger over blackouts helped fuel deadly protests from late 2019 to mid-2020, including many in southern Iraq. 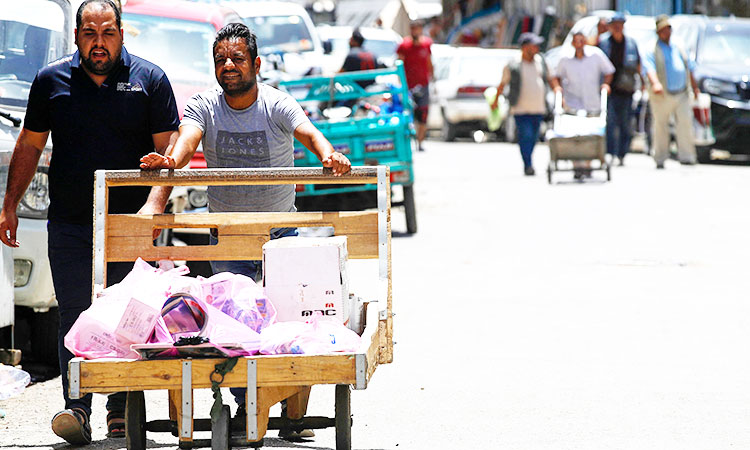 A porter transports an order in the capital Baghdad. AFP

Nataq Al Khafaji, who lives in Nasiriyah, just north of Basra, said getting by in the heat without electricity was "very difficult for the children and the elderly." "It's hell," he added.

During the summer holidays, Khafaji's three children have nowhere to go and little to do. Stuck in their darkened home, they try as best as they can to escape the suffocating heat outdoors.

Khafaji has bought a battery-operated fan, but expressed worry that it would not be enough during the worst months "when it will be close to 50 degrees."

The United Nations ranks Iraq as one of the top five countries most vulnerable to climate change.

Since mid-April, it has been battered by 10 sandstorms — a product of intense drought, soil degradation, high temperatures and low rainfall linked to climate change.

President Barham Saleh has warned that tackling climate change "must become a national priority for Iraq as it is an existential threat to the future of our generations to come." 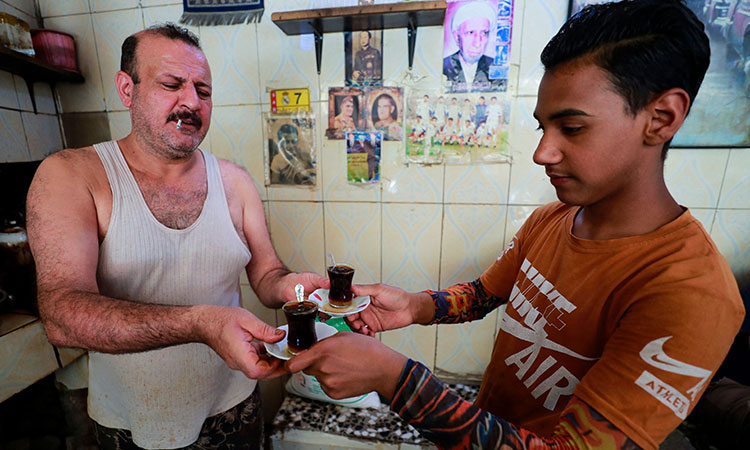 A tea vendor prepares an order for customers in the capital Baghdad. AFP

With heat waves and dust storms "expected to increase over the years", so will health issues, said Seif al-Badr, a spokesman for the health ministry.

"We expect to be treating more people for a variety of illnesses linked to climate" change, he told AFP. But efforts to address such issues appear to have been shelved, as Iraq grapples with political deadlock that has left it without a new government after polls last October.

The World Bank has warned that unless solutions are found, Iraq could lose 20 percent of its water resources by 2050 due to climate change. 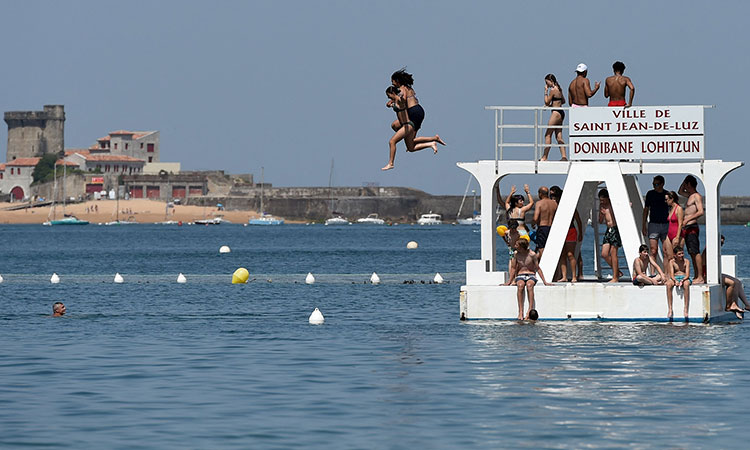 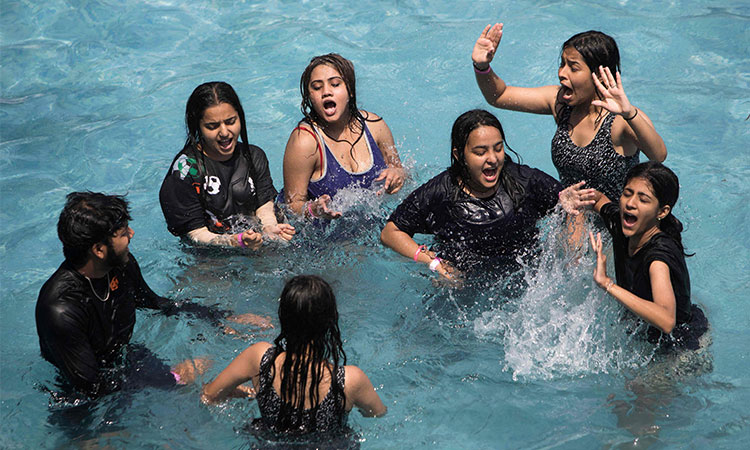