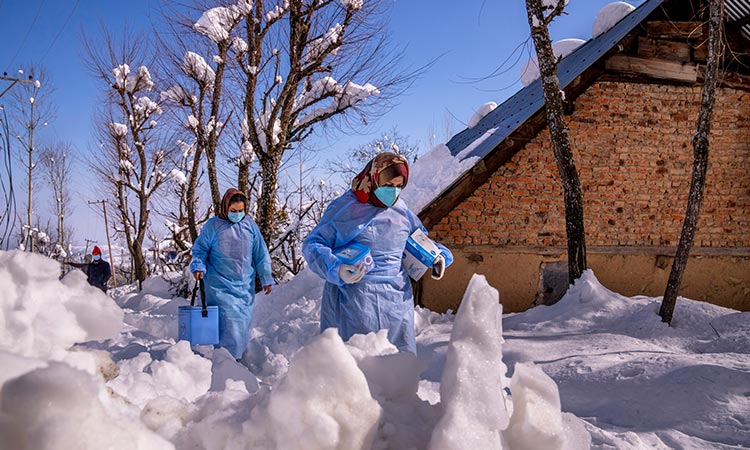 Fozia, right and Tasleema carry vaccines as they walk on a snow covered road. AP

In a Himalayan village in the Indian-controlled part of Kashmir, young health worker Masrat Farid packed her bag with vaccines on a frigid morning in January as strong winds swept snow through the air.

She is part of a team of health workers undertaking a door-to-door campaign in the region to deliver vaccine shots to teens and boosters to old people in remote mountain villages. 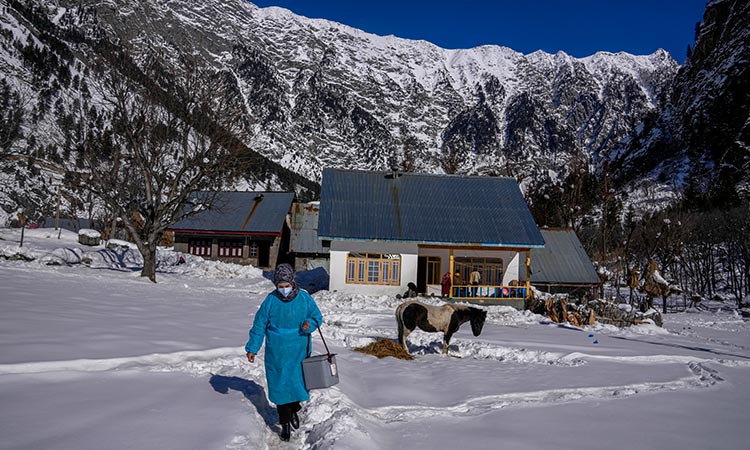 Masrat Farid, a healthcare worker, carries vaccines as she walks on a snow covered field. AP

"We have to fight the infection. We have to keep going,” Farid said as she made her way through the knee-high snow in Gagangeer, a hamlet lying between forests.

Farid and her colleagues have vaccinated thousands in the last year, mostly in villages that they reach by trekking long distances across rugged countryside.

But bone-chilling cold and snowy inhospitable terrain are not their only obstacles. 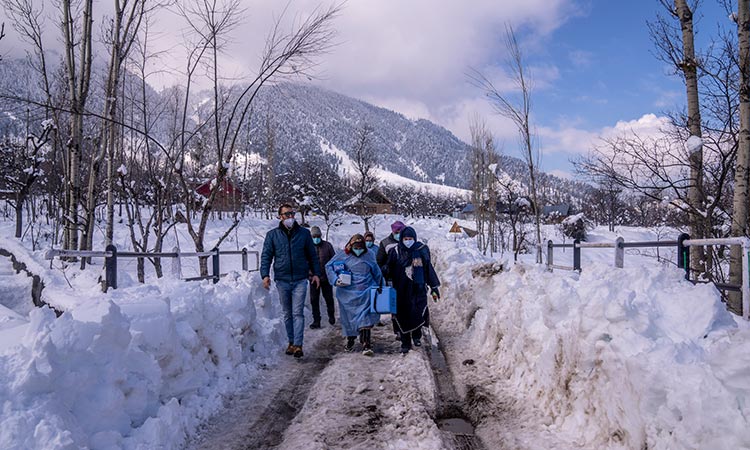 Team of healthcare workers and doctors carry vaccines as they walk on a snow covered road. AP

"Most young girls are hesitant, fueled by misinformation and mistrust,” Farid said during a recent vaccination drive in a snow-covered mountain village. She was referring to the false belief that the vaccine impacts or even prevents pregnancy.

"We are not only inoculating them against the coronavirus, we must also educate them about the vaccines to earn their trust,” she said.

In a new phase that began this month, the health workers are inoculating teens in the age group of 15 to 18 and giving booster shots to people above age 60 with health problems.

The boosters, which Indian health officials call a "precautionary” shot, are being given to high-risk groups who were among the first to receive vaccines last year and whose immunity may be waning. 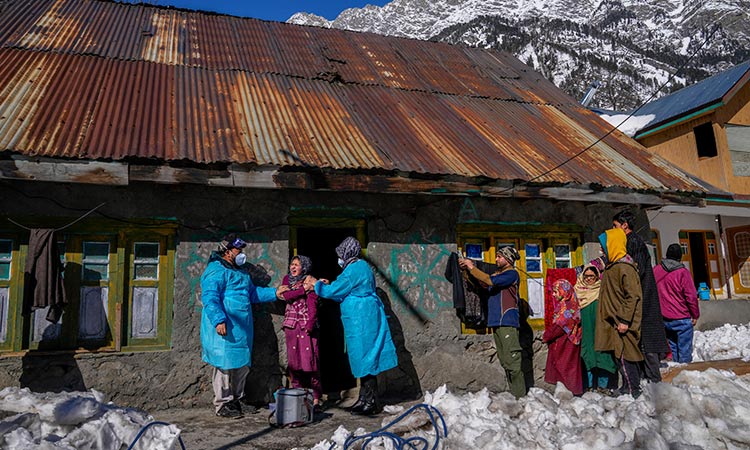 Jaffar Ali, a health official, said the top challenge so far this year has been harsh weather - unlike last year when some of his colleagues were harassed by locals during the vaccination campaign, as many residents thought the shots caused impotence, serious side effects or could even kill.

So far, health workers have fully vaccinated over 72% of eligible people out of the region’s 14 million population, according to official data.

Health officials recently hiked to some villages which were cut off from the nearest towns due to heavy snowfall and vaccinated residents there - including Khag, a forested village where the residents are mostly tribal and live in houses made from mud, stone or wood.

Arsha Begum, an elderly woman, expressed her gratitude as a medical team visited her home and gave her a booster shot inside her house.

"It would not have been possible for me to go to a hospital in this harsh weather. I am immensely thankful to them,” she said.