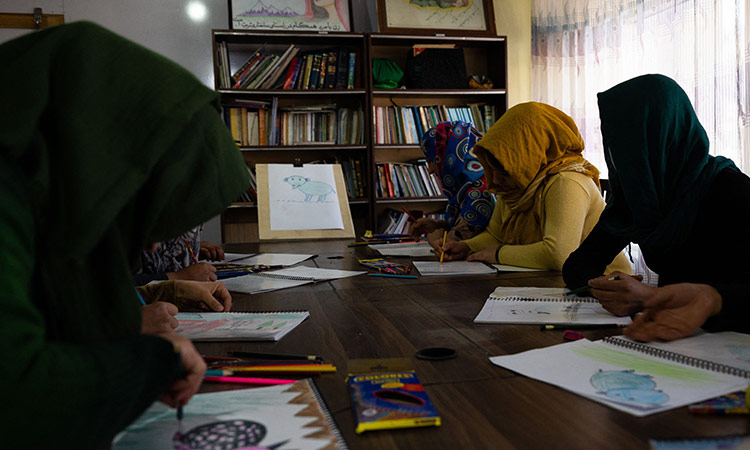 Married off at seven to a man old enough to be her great-grandfather, Fatema endured rapes, beatings and starvation until she could take no more and tried to kill herself.

Through tears she recalls the beatings she received — like the time, aged 10, she was flung against a wall and "my head crashed against a nail... I almost died."

Today the 22-year-old is living in one of the few shelters for battered women still open in Afghanistan since the Taliban's August return to power, but is fearful she could lose her place at any time. 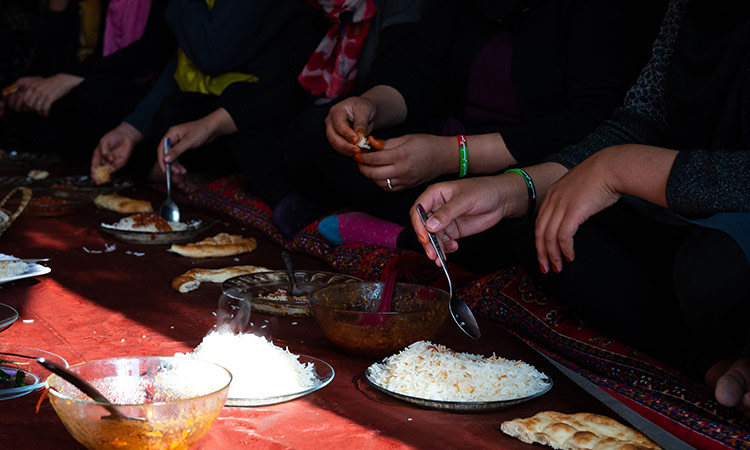 Women and girls have lunch in a shelter. AFP

If the refuge closes, Fatema will have nowhere to go. She has lost touch with her own family, while in-laws have vowed to kill her for dishonouring their name.

Fatema's plight is shared by millions in Afghanistan, where patriarchal tradition, poverty and a lack of education have held back women's rights for decades. 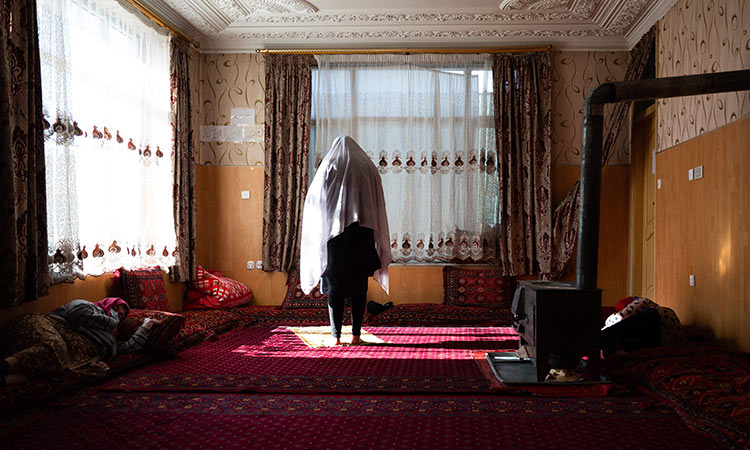 A woman prays while two other rest in a shelter in Kabul. AFP

According to the United Nations, 87 percent of Afghan women have experienced some form of physical, sexual or psychological violence.

Despite this, the country of 38 million had only 24 shelters dedicated to their care before the Taliban's return — almost all financed by the international community and frowned upon by many locals.

Some NGOs running shelters stepped up their work long before the Taliban takeover. The director of one organisation told AFP she began moving women away from shelters in unstable provinces in advance of the US troop withdrawal.

Some were sent back to their blood relatives in the hope they would be offered protection from vengeful in-laws. Others were sent to shelters in bigger provincial capitals.

As the Taliban onslaught continued the situation became desperate, and around 100 women were transferred to Kabul — only for the capital to fall.

"We have to start from scratch," says the director, who asked not to be named or the organisation identified while they navigated how to operate under the new regime.

The Taliban insist their strict interpretation of the Koran provides women with rights and protection, but the reality is very different and they are slowly being squeezed out of public life.

Most secondary schools for girls are shut, women are barred from government employment apart from select specialised areas, and this week new guidelines stated they cannot undertake long journeys unless accompanied by a male relative.

There has been some glimmer of light.

Earlier this month supreme leader Hibatullah Akhundzada denounced forced marriage, while Suhail Shaheen — the Taliban's would-be ambassador to the UN — told Amnesty International that women could go to court if they were victims of violence.

The regime has not made any formal pronouncement on the future of shelters, although the refuges have not escaped their notice.

Taliban fighters and officials have paid several visits to the one housing Fatema and around 20 other women, according to employees. "They came in, looked at the rooms, checked there were no men," said one worker. "They said this is not a safe place for women, that their place is at home," said another. Still, it gave one woman hope. "It was much better than we expected," the first worker told AFP.

Even before the Taliban takeover many women in abusive households had little recourse.

Zakia approached the Ministry of Women's Affairs — since shut down by the Taliban — for advice on how to escape a father-in-law who had threatened to kill her.

"They didn't even listen to me," she said, and told her that her situation was not that bad.

Mina, 17, who ran away from an abusive uncle seven years ago with her younger sister, had a similar reception. "The ministry accused me of lying," she told AFP.

And it is not just the women seeking shelter who are vulnerable, with Amnesty International saying shelter workers also "risk violence and death."

Several staffers said they had been threatened over the phone by people claiming to be Taliban seeking the whereabouts of women who had fled their households.

Cases of abuse are likely to rise with the virtual collapse of the economy bringing soaring unemployment, a cash-flow crisis and mounting hunger.

"When the economic situation worsens, men are out of work, and cases of violence increase," one shelter worker said. "The situation has probably worsened... services have generally decreased," said Alison Davidian, interim representative for UN Women in Afghanistan.

One of the few shelters open — albeit discretely — is run by Mahbouba Seraj, a pioneer in the struggle for women's rights in the country.

After being inspected by the Taliban it was "kind of left alone," she says, but her concern is now for the women trapped in abusive households who have nowhere to go. Zakia, at least, has shelter for now -- but for how long? "My own father said he didn't care about me," she says.