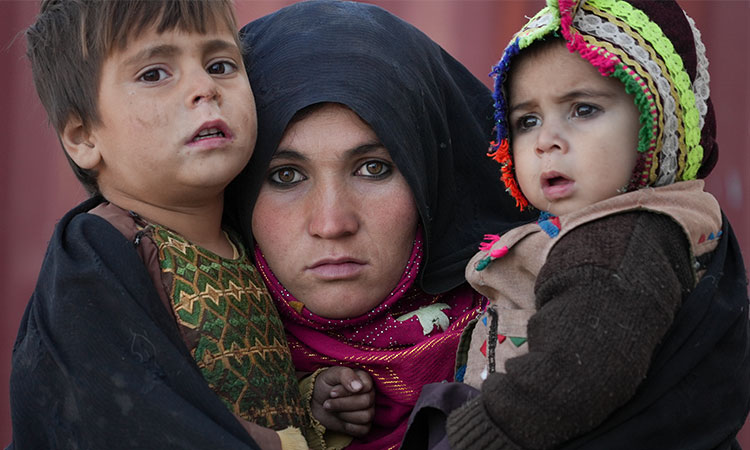 An Afghan woman holds her children as she waits for a consultation outside a makeshift clinic in Herat. AP

In a sprawling settlement of mud brick huts in western Afghanistan housing people displaced by drought and war, a woman is fighting to save her daughter.


Aziz Gul’s husband sold the 10-year-old girl into marriage without telling his wife, taking a down-payment so he could feed his family of five children. Without that money, he told her, they would all starve. He had to sacrifice one to save the rest.

Many of Afghanistan’s growing number of destitute people are making desperate decisions such as these as their nation spirals into a vortex of poverty.

The aid-dependent country’s economy was already teetering when the Taliban seized power in mid-August amid a chaotic withdrawal of US and Nato troops.

The international community froze Afghanistan’s assets abroad and halted all funding, unwilling to work with a Taliban government given its reputation for brutality during its previous rule 20 years ago.

The consequences have been devastating for a country battered by four decades of war, a punishing drought and the coronavirus pandemic. Legions of state employees, including doctors, haven’t been paid in months. Malnutrition and poverty stalk the most vulnerable, and aid groups say more than half the population faces acute food shortages.

"Day by day, the situation is deteriorating in this country, and especially children are suffering,” said Asuntha Charles, national director of the World Vision aid organisation in Afghanistan, which runs a health clinic for displaced people just outside the western city of Herat.

Arranging marriages for very young girls is a frequent practice throughout the region. The groom’s family — often distant relatives — pays money to seal the deal, and the child usually stays with her own parents until she is at least around 15 or 16. Yet with many unable to afford even basic food, some say they’d allow prospective grooms to take very young girls or are even trying to sell their sons. But Gul, unusually in this deeply patriarchal, male-dominated society, is resisting. Married off herself at 15, she says she would kill herself if her daughter, Qandi Gul, is forcibly taken away.

Gul remembers well the moment she found out her husband had sold Qandi. For around two months, the family had been able to eat. Eventually, she asked her husband where the money came from, and he told her. 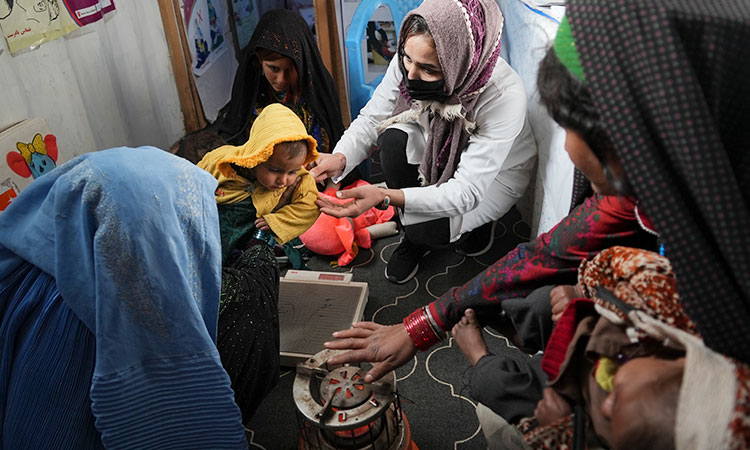 A nurse checks the weight of a child in the makeshift clinic organised by World Vision at a settlement near Herat. AP

"My heart stopped beating. I wished I could have died at that time, but maybe God didn’t want me to die,” Gul said. Qandi sat close to her mother, her hazel eyes peering shyly from beneath her sky-blue headscarf. "Each time I remember that night...I die and come back to life. It was so difficult.”
She asked her husband why he did it.

"He said he wanted to sell one and save the others. ‘You all would have died this way,’ (he said.) I told him, ‘Dying was much better than what you have done.'”
Gul rallied her community, telling her brother and village elders that her husband had sold her child behind her back. They supported her, and with their help she secured a "divorce” for her child, but only on condition she repays the 100,000 Afghani (about $1,000) that her husband received. 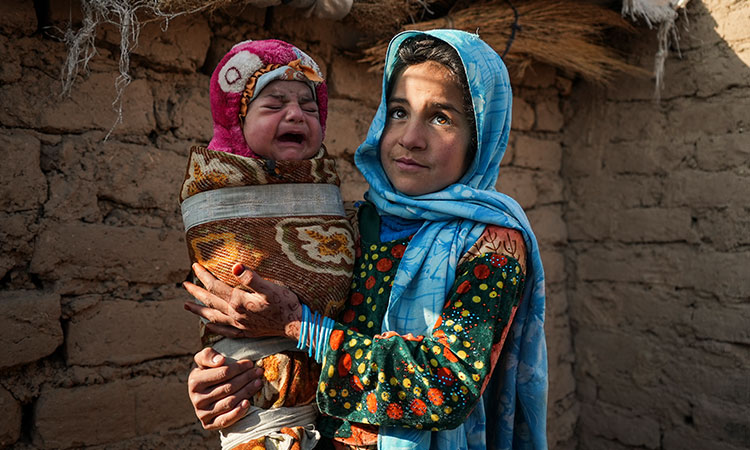 Qandi Gul holds her brother outside their home housing those displaced by war and drought near Herat. AP

It’s money she doesn’t have. Her husband fled, possibly fearing Gul might denounce him to the authorities. The Taliban government recently announced a ban on forcing women into marriage or using women and girls as exchange tokens to settle disputes.

The family of the prospective groom, a man of around 21 or 22, has already tried several times to claim the girl, she says. She is not sure how long she can fend them off.

"I am just so desperate. If I can’t provide money to pay these people and can’t keep my daughter by my side, I have said that I will kill myself,” Gul said. "But then I think about the other children. What will happen to them? Who will feed them?” Her eldest is 12, her youngest — her sixth — just two months. 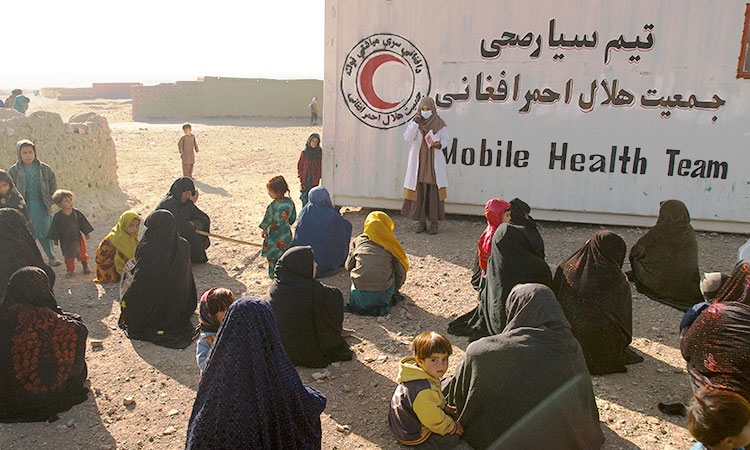 People gather near a makeshift clinic at a settlement housing those displaced by war and drought, near Herat. AP

Now alone, Gul leaves the children with her elderly mother while she goes to work in people’s homes. Her 12-year-old son works picking saffron after school. It’s barely enough to keep them fed, and the saffron season is short, only a few weeks in the fall.
"We don’t have anything,” Gul said.

In another part of the same camp, father-of-four Hamid Abdullah was also selling his young daughters into arranged marriages, desperate for money to treat his chronically ill wife, pregnant with their fifth child.

Abdullah borrowed money to pay for his wife’s treatments and can’t pay it back, he said. So three years ago, he received a down-payment for his eldest daughter Hoshran, now 7, in an arranged marriage to an 18-year-old in their native Badghis province. He’s now looking for someone to buy his second daughter, 6-year-old Nazia.

"We don’t have food to eat,” Abdullah explained, adding he also had to buy medicine for his wife, who soon would need more treatment. "She needs another surgery, I don’t have one Afghani to pay for the doctor.”

The family that bought Hoshran is waiting until she is older before the full amount is settled, he explained. But he needs money now for food and treatments, so he is trying to arrange a marriage for Nazia for about 20,000-30,000 Afghani ($200-$300). 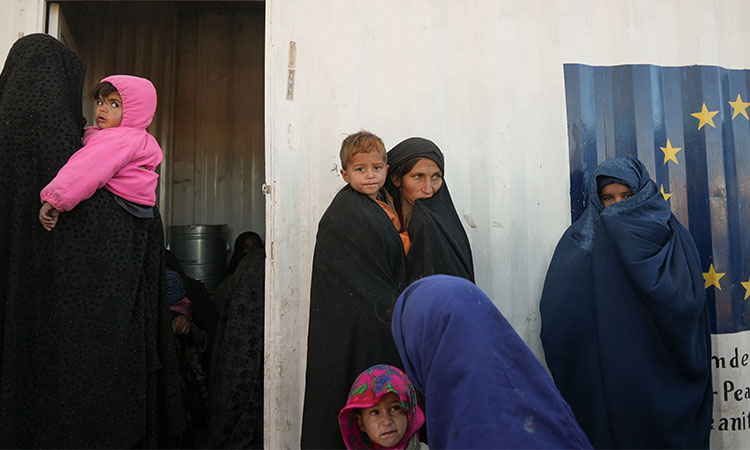 Afghan women gather outside a makeshift clinic organized by World Vision at a settlement near Herat. AP

"What should we do? We have to do it, we have no other option,” said his wife, Bibi Jan. "When we made the decision, it was like someone had taken away a body part from me.”

In the neighbouring province of Badghis, another displaced family is considering selling their son, 8-year-old Salahuddin.

His mother, Guldasta, said that after days with nothing to eat, she told her husband to take the boy to the bazaar and sell him to bring food for the others.

"I don’t want to sell my son, but I have to,” the 35-year-old said. "No mother can do this to her child, but when you have no other choice, you have to make a decision against your will.”

Salahuddin blinked and looked on silently. Surrounded by some of his seven brothers and sisters, his lip quivered slightly.

His father, Shakir, who is blind in one eye and has kidney problems, said the children had been crying for days from hunger. Twice, he said, he decided to take the boy to the bazaar and twice he faltered, unable to go through with it. "But now I think I have no other choice than to sell him.”

Buying of boys is believed to be less common than girls, and when it does take place, it appears to be cases of infant boys bought by families who don’t have any sons. In her despair, Guldasta thought perhaps such a family would want an 8-year-old.

The desperation of millions is clear as more and more people face hunger. By the end of the year, some 3.2 million children under 5 years old are expected to suffer from acute malnutrition, according to the UN.

Nazia is one of them. The 4-year-old lay listlessly in her mother’s arms after visiting the World Vision health clinic.

Two years ago, Nazia was a plump toddler, her mother Fatima said. Now, her emaciated limbs are just skin covering bone. Her little heart beats visibly beneath her ribcage.

"I’m happy to see the pledges are made,” she said. But the pledges "shouldn’t stay as promises, they have to be seen as reality on the ground.” 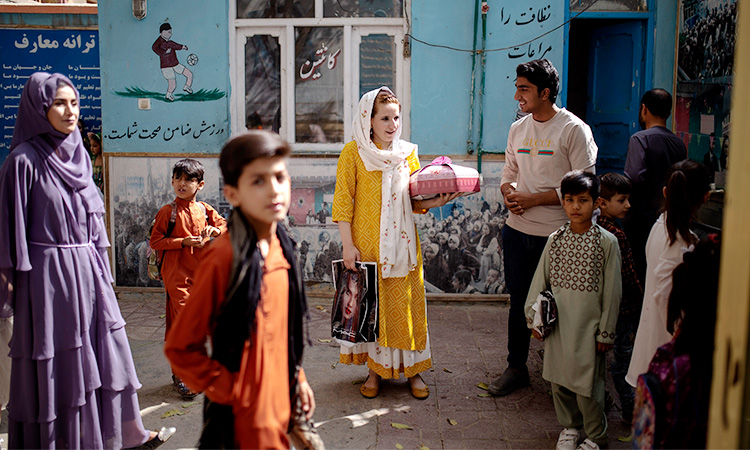 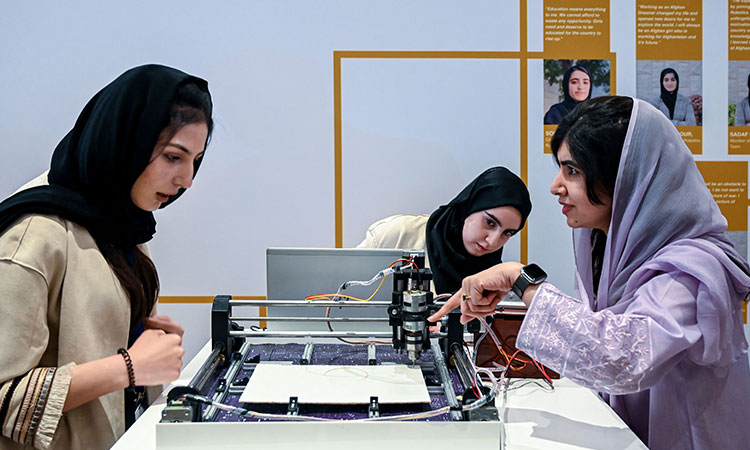 Malala said girls' schooling should be a condition of diplomatic recognition for the Taliban. "They shouldn't be recognised if they didn't recognise the human rights of women and girls," she said.