Under years of Taliban rule, women nurses work alongside men 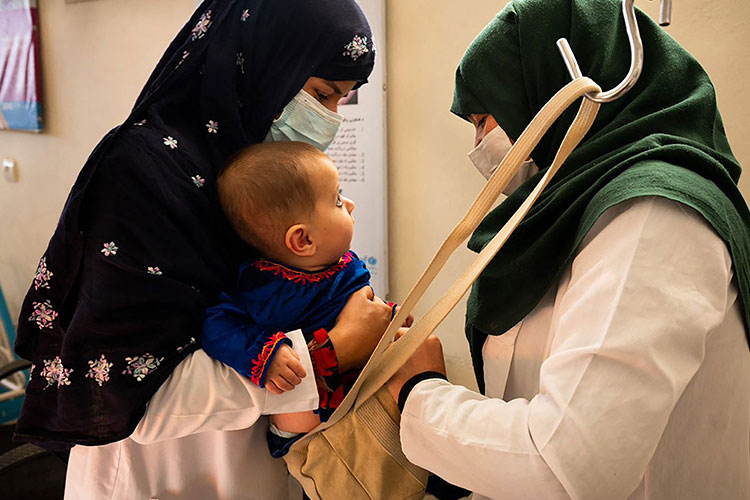 A midwife (L) and a nutrition counsellor weighing a baby at the Tangi Saidan clinic. AFP

In a village deep in the mountains of central Afghanistan that has been ruled by the Taliban for a quarter of a century, women openly work alongside men at a vital health clinic.

Tangi Saidan in Wardak province has lived in the shadow of the front line but never been under the full control of government forces since a US-led invasion ousted Taliban regime in 2001.

Reached by narrow dirt roads, the Tangi Saidan clinic is alone in offering surgery in the remote area, with local Taliban leaders allowing some flexibility in the movement's rules on the segregation of the sexes.

"We have to operate here. If we don't, women will die," said Sharif Shah, a man and the only surgeon, who carries out procedures on women.

It takes hours to reach the clinic from some surrounding villages, and in the winter, when snow blocks the roads, patients are often carried on foot.

Reaching better health facilities in the capital Kabul, a day trip away on rocky, winding roads, is out of the question for people in this impoverished mountain area.

There are seven women among the clinic's 28 staff members: one nurse, a vaccine specialist, two midwives, a nutritionist and two cleaners, often working side by side with men.

"When it is necessary, Islamic law permits it," Mohammad, the Taliban official in charge of health care in Daymirdad district, told AFP.

The Taliban, who seized power in August as US-led forces withdrew from Afghanistan, have yet to issue clear guidelines on how they will govern in line with sharia law. 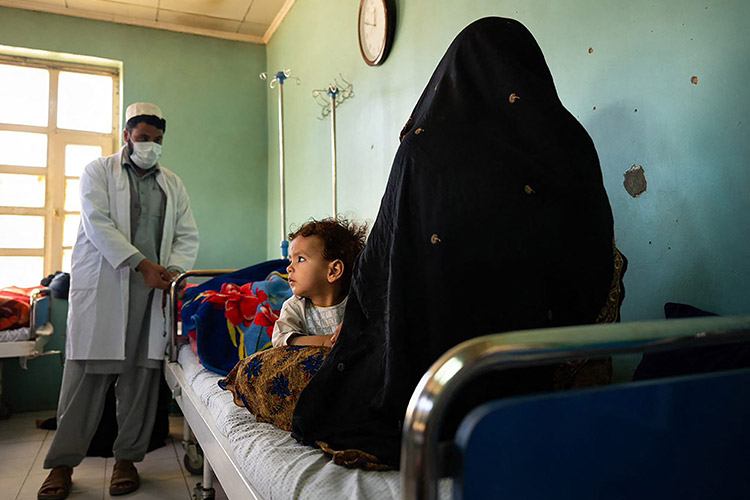 A doctor talking with a patient and her child at the Tangi Saidan clinic. AFP

They initially ordered women to refrain from returning to work until Islamic systems were in place.

The group later called women health workers back to clinics and hospitals, but many were too afraid to resume their duties.

Others in Kabul, the most progressive Afghan city, said rules on segregation made their work too difficult.

But Jamila, the sole female nurse at the Tangi Saidan clinic, said she had never had to worry about working in Daymirdad, although she is chaperoned by a male "mahram", or guardian, when she does the night shift.

"People don't have a problem with men doctors, because a doctor is like a mahram," she said.

Clear rules govern this coexistence -- one of few exceptions granted by the Taliban.

"Men and women can work together in the same room, although under normal circumstances there should be a curtain between them," the Taliban official explained.

Yet at the Tangi Saidan clinic, there is no curtain, and nurse Jamila chats openly with her male colleagues. 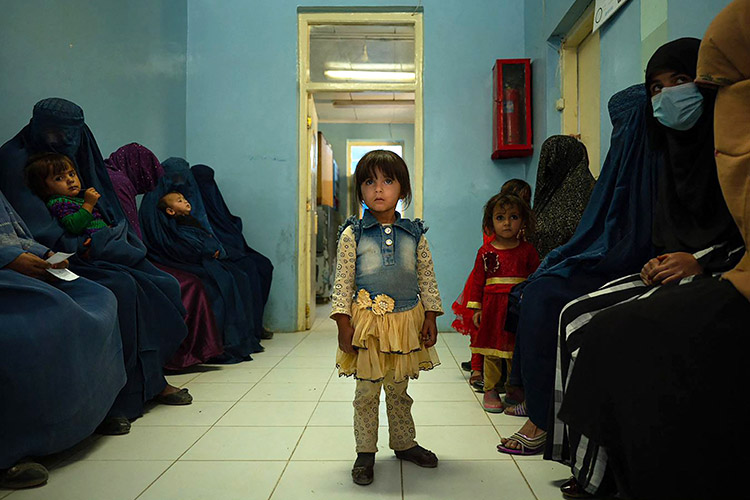 A child standing in a waiting room at the Tangi Saidan clinic run by the Swedish Committee. AFP

In deeply conservative Afghanistan, even in areas under the control of the previous US-backed governments, women and men were expected to be treated by a health professional of the same sex.

Jamila is more concerned with whether she will continue to be paid.

The country's health service is on the brink of collapse, with Western nations largely halting the aid that propped up Afghanistan’s clinics and hospitals.

Many staff at government health centres have gone months without salaries, while medicines are dwindling and skilled staff such as doctors have fled the country.

The Taliban victory has brought economic hardship but also an end to air strikes and night raids by airdropped government forces in the village, located near a front line.

The clinic run by the Swedish Committee for Afghanistan was repeatedly targeted by troops looking for Taliban militants, who were treated alongside civilians during the conflict.

Behind its green walls, still pockmarked from automatic fire, Mandanda, a patient in her 60s who has come from a neighbouring village for chest pains, is relieved.

"We are no longer losing our children. It is as though the sun has finally risen," she said.

But in a neighbouring bed, Jamila, a 40-year-old mother of seven, is less upbeat.

"They have brought us peace, but we have nothing to eat," she told AFP.

Mastura, a 27-year-old midwife, recalls with horror an attack on the clinic two years ago -- helicopters roaring above, screams, and a gun pointed at her when Afghan government forces charged in.

During her seven years at the clinic, the fear of raids was part of everyday life, but Mastura said she had avoided run-ins with the Taliban.

"They are not in the street saying 'do this or don't do that'. They live here with their families as part of society," she said.

But Mastura is under few illusions about the future under the Taliban.

"I don't think that it will be any better for my daughter."