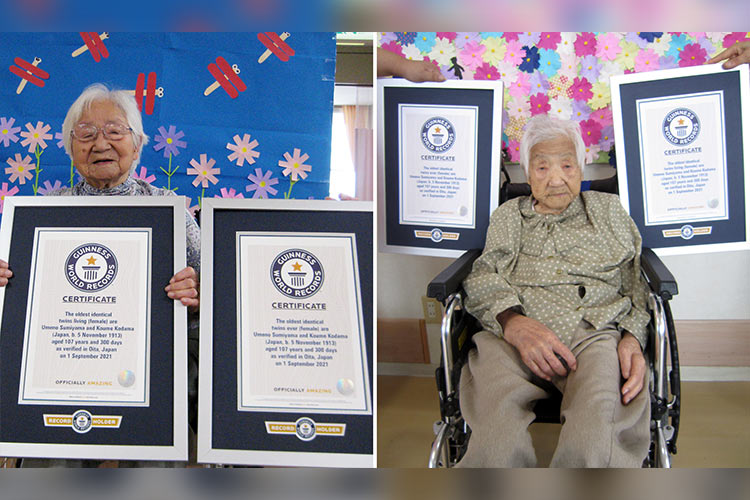 Japan’s 107-year-old twins Umeno Sumiyama and Koume Kodama are declared as the world’s oldest identical twins (living and ever/female) at 107 years, and 300 days, as of Sept.1, 2021.

Guinness World Records, the global authority on record-breaking has awarded both of them certificates on their achievement.

Their family says they have described their childhood was just like a Japanese TV drama “Oshin” that featured a girl in Meiji period.

The hardest thing at that time was being bullied because they were twins.

Umeno is  blessed with four children and Koume has three kids after marriage.

Both of them live in separate areas of Japan, Umeno in Shodo Island and Koume in Oita.

Both of them are sociable and positive people, according to their family.

They, however, were unable to catch up with each other often, except at weddings and funerals, from around 70 years old.

Of late both of them began travelling together for some Buddhist pilgrimage sites every year.

Umeno  lives in rest house from this April whereas Koume is living in a rest house since age of 106.

Guinness World Records verified all the records and details from their family after they claimed record.

The twins knew Kin Narita and Gin Kanie, the previous record holder and had joked about reaching their age, however, they never expected to break it.

Umeno was in tears of joy in tears after receiving the certificate..

On the other hand Koume didn't fully comprehended what the official certificate was about, but her family is happy about it as  Koume often talked about Guinness World Records in the past.

Guinness sent their certificates to their rest houses the because of COVID-19 pandemic and certificates were handed over to them by caretakers.

The title for the oldest person living currently belongs to Kane Tanaka, who is now at the age of 118.

The oldest person ever to have lived was Jeanne Louise Calment (France) who lived to 122 years and 164 days.