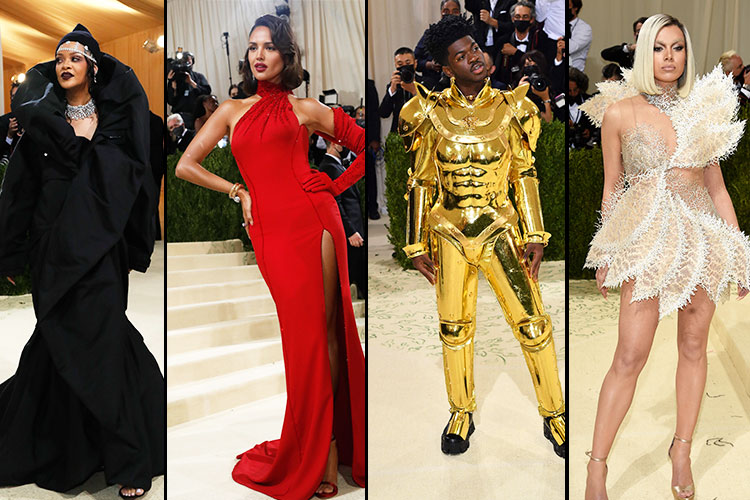 After more than a year of virtual red carpets and digital-only award ceremonies, fashion’s biggest event of the year couldn’t have come returned soon enough. The Met Gala is renowned for being the ultimate sartorial spectacle, attracting the most famous celebrities and designers, and generating a litany of memes and viral social media posts thanks to an array of extravagant – and occasionally outrageous – outfits.

Given that last year’s event was cancelled and this year’s was postponed, anticipation for the Met Gala felt higher than ever before. 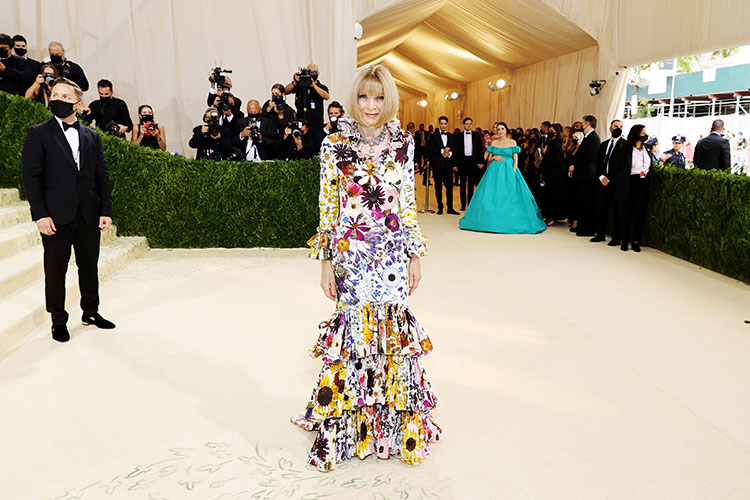 Hosted by Naomi Osaka, Billie Eilish, Timothée Chalamet, and Amanda Gorman, the event was held to honour the annual exhibition at the Metropolitan Museum of Art’s Costume Institute, which this year was about all things American fashion.

The dress code for the Met Gala always takes its cues from the exhibition, but with a fairly broad theme this year (it’s essentially a celebration of American fashion and design), there was no knowing how attendees would respond. 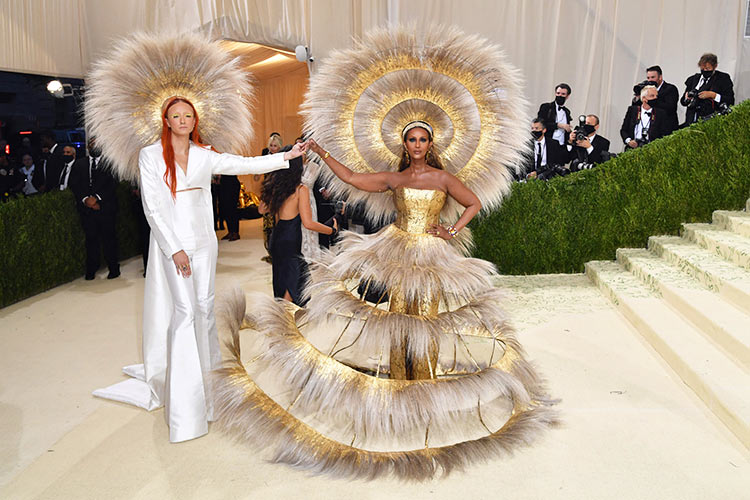 Of course, they didn’t disappoint. Eilish arrived in a custom peach Oscar de la Renta gown while her co-host, Gorman, opted for a strapless blue frock that was designed especially for her by Vera Wang.

Elsewhere, we saw Lil Nas X pack a fashion punch in a gold bodysuit by Versace as Game of Thrones star Maisie Williams chose a gothic look by Thom Browne.

There were political statements aplenty, too, thanks to Cara Delevingne and Alexandria Ocasio-Cortez, whose white gown bore the words “Tax The Rich” in red lettering. 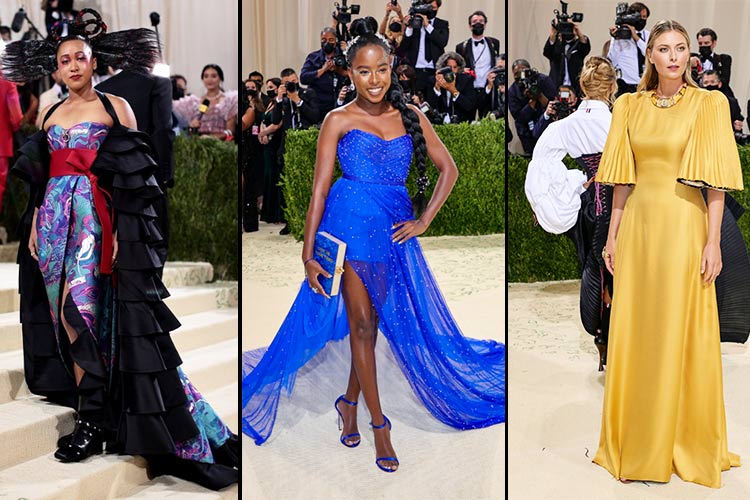 Here are our picks of the best-dressed stars at the 2021 Met Gala.

The American Vogue editor arrived in a custom floral gown by Oscar de la Renta that featured ruffled sleeves, a fitted bodice, and a fishtail skirt.

The actor, who co-hosted this year’s event, wore a white double-breasted suit by Haider Ackermann featuring a cropped jacket and loose fitting trousers. He paired the suit with Converse trainers, which was in keeping with the American theme. 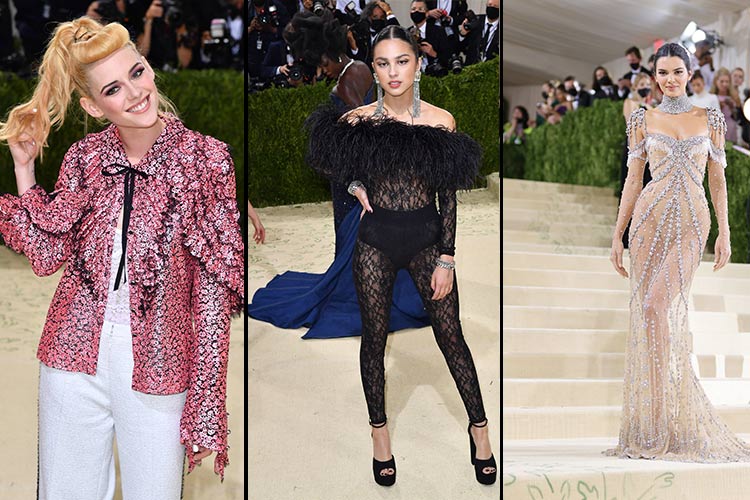 The musician wore a peach strapless gown by Oscar de la Renta. Speaking to Vogue about her glamorous look, Eilish explained that “it was time” for her to wear such an ensemble, referencing her sartorial transformation that she debuted earlier this year on the cover of British Vogue. As for what the look was inspired by, Eilish said it came from the holiday-themed Barbie dolls she used to play with as a child.

The vibrant blue strapless gown featured a short hemline and a sheer skirt that billowed onto the red carpet. The look was inspired by the Statue of Liberty, with Gorman’s crown taking the form of laurels to reference her poetic prowess.

The tennis star, who was one of the event’s co-chairs, wore a colourful Louis Vuitton look that featured a scarlet sash at the waist and a tiered ruffled black cape. 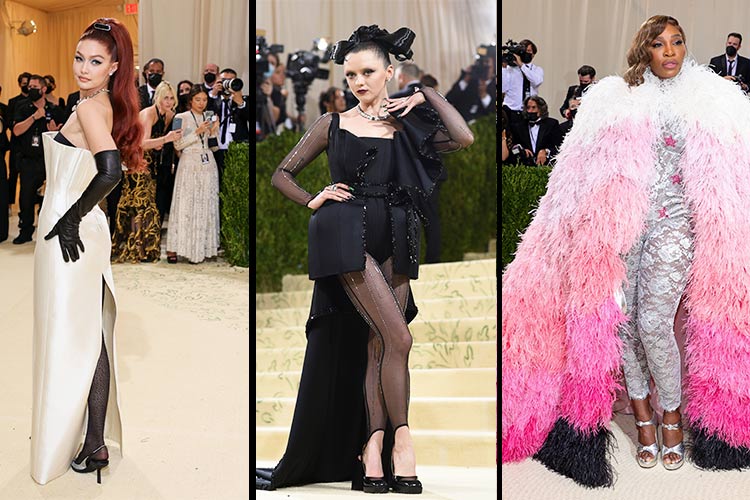 The American rapper made a statement in a gold bodysuit designed for him especially for the Met Gala by Atelier Versace.

The Game of Thrones star arrived wearing an all-black ensemble by Thom Browne that featured sheer sleeves and tights.

The American actor wore a classic black tuxedo by Versace for the occasion. 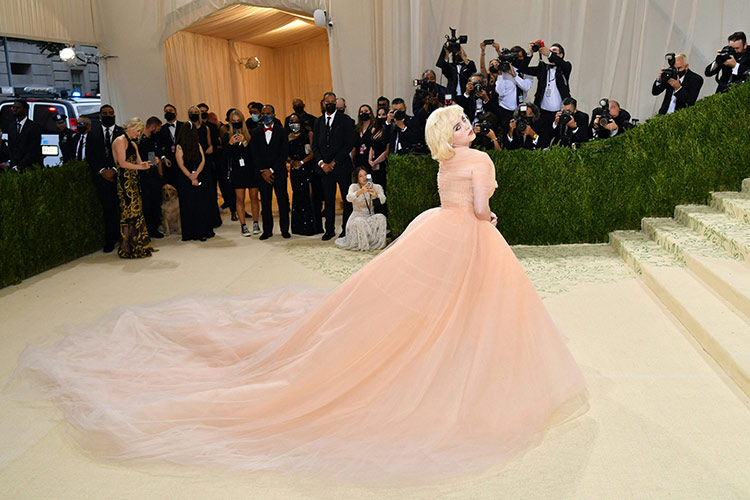 US singer/songwriter Billie Eilish arrives for the 2021 Met Gala. AFP

The tennis champion arrived in a pink feathered creation by Gucci that featured a large cape and a silver and pink lace bodysuit.

Gender-fluid fashion designer Harris Reed was responsible for this show-stopping ensemble, which featured a gold baroque-patterned corset and a feathered tiered skirt. The standout feature of the look, though, was its large circular headdress.

The Spencer star wore a pair of white wide-leg trousers with a pink jacket that featured a draped collar with floral decorations. The look was from the Chanel couture SS21 line.