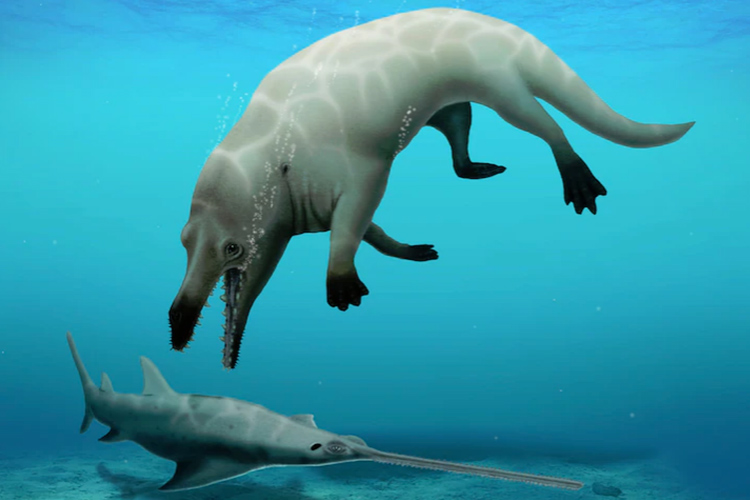 An illustration of the semiaquatic "god of death" whale. Image credit: Illustration by Robert W. Boessenecker

A semi-aquatic whale that lived about 43 million years ago was named after Anubis, the Ancient Egyptian god of death.

Scientists said they had discovered the 43 million-year-old fossil of a previously unknown amphibious four-legged whale species in Egypt that helps trace the transition of whales from land to sea.

It is believed to be the first time in history that an Arab-Egyptian team has documented a new species of whales.

With a length of 3 metres and weight of 600 kg, the whale was able to walk on land and swim in water like crocodiles and small mammals, the statement added.

"Paleontologists discovered the fossils in 2008 during an expedition in Egypt's Fayoum Depression that is famous for sea life fossils dating back to the Eocene Epoch about 56 to 33.9 million years ago," said Hisham Sallam, chairman of the Mansoura University Center for Vertebrate Fossils that supervises the research team.

He added that the team worked for four years to document and record the study after comparing the fossils with samples of other whales in and outside Egypt.

The new whale was named Phiomicetus Anubis in honour of the name of the Fayoum oasis, the place from which its fossils were extracted, while the species "Anubis" was named after the god of death and mummification in the ancient Egyptian civilisation, to give the purely Egyptian character to the discovery, said the statement.

The study was published online in the journal Proceedings of the Royal Society B: Biological Sciences.

The new species is considered to be the oldest whale discovered in Africa.