‘One can ask if we haven’t already stepped on this landmine’: Scientist who led largest Arctic expedition says heating may be irreversible - GulfToday 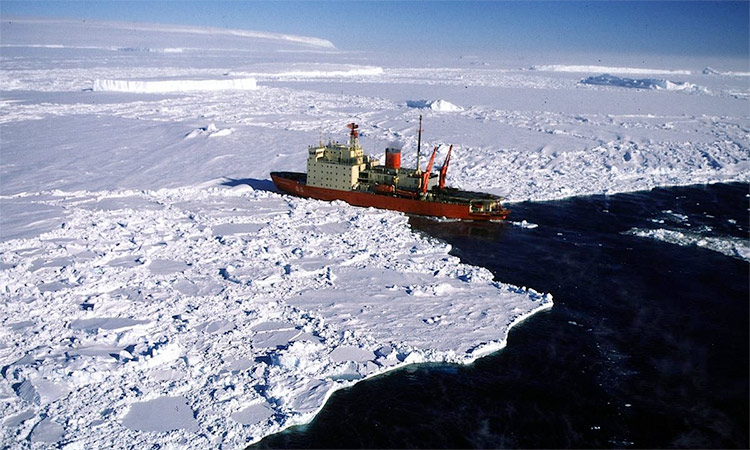 The scientist who led the largest-ever research expedition to the Arctic has suggested that the tipping point for irreversible global heating may have already been reached.

Dr Markus Rex, an atmospheric physicist, made the comments earlier this week as he presented the initial findings of the North Pole expedition which involved 442 experts from 20 countries.

“The disappearance of summer sea ice in the Arctic is one of the first landmines in this minefield, one of the tipping points that we set off first when we push warming too far,” Dr Rex said.

“And one can essentially ask if we haven’t already stepped on this mine and already set off the beginning of the explosion.”

The Multidisciplinary drifting Observatory for the Study of Arctic Climate - or “MOSAiC” expedition - lasted 389 days and gathered data on the atmosphere, ocean, sea ice and ecosystems. The aim was to assess how the climate crisis is impacting the Arctic region, and the world more broadly.

Among the initial findings, Dr Rex said the team found that Arctic sea ice had retreated “faster in the spring of 2020 than since the beginning of records” and that “the spread of the sea ice in the summer was only half as large as decades ago”.

He added: “Only the evaluation in the next years will allow us to determine if we can still save the year-round Arctic sea ice through forceful climate protection or whether we have already passed this important tipping point in the climate system.”

Human-caused global heating is warming the world’s oceans and increasing the rate of Arctic sea ice melting. White ice will reflect sunlight so when the dark ocean is exposed it absorbs even more sunlight, causing more heating, according to the Independent.

The extent of ice-covered ocean at the North Pole and extending further south to Alaska, Canada, Greenland and Russia reached a summertime low of 1.4 million square miles last September. Arctic sea ice reaches its low point in September and its high in March.

It was runner-up only to 2012 when the ice shrank to 1.3 million sq m (3.4 million sq km), according to the National Snow and Ice Data Center, which has been keeping satellite records since 1979.

In the 1980s, the ice cover was about 1 million sq m (2.7 million sq km) larger than current summer levels.

Last year scientists told The Independent that claims the world is “doomed” can be detrimental to global efforts to tackle the climate crisis, and that it was important to understand it was not too late to take action.

Leo Barasi, author of the Climate Majority, said: “Claims the world is irreversibly doomed to runaway warming, and no amount of emission cuts can help us, can always find an audience, just like claims that climate change is nothing to worry about. But these assertions usually rest on outlying studies or data that’s been taken out of context and ignore all the opposing evidence.

“Telling the world that we’re doomed, when that’s not backed up by the evidence, is irresponsible and unlikely to motivate the urgent action that can still prevent disastrous warming.”