The candidate and her hijab: Identity matters in French elections - GulfToday

The candidate and her hijab: Identity matters in French elections Sara Zemmahi holds her campaign flyer with the slogan 'Different, but united for you' as she poses during an interview in the La Mosson market in Montpellier, France. Reuters

Laboratory technician Sara Zemmahi was running to be a local councillor backed by President Emmanuel Macron's ruling party until last month when it withdrew its support. Her transgression: wearing her hijab in a campaign poster.

The 26-year-old and the three other candidates who had been on the same ticket are now running as independents in the southern city of Montpellier under the slogan "Different but united for you." The affair erupted after the far-right seized upon the image as proof Macron was weak on protecting France's secular values, and propelled Zemmahi into a national row over identity. "We're not giving up," Zemmahi said, still wearing her hijab as she distributed campaign fliers in La Mosson, a low-income Montpellier district that is home to generations of Muslim immigrants from France's former north African colonies.

In her first interview since she became embroiled in the national debate over the role of Islam in France, Zemmahi said she wanted to focus on promoting equal opportunities and fighting discrimination.

"This is my neighbourhood, I was born here. The headscarf wasn't an issue for the four of us." However, across much of France it is. Zemmahi's campaign photo split Macron's LaRem party, reflecting deep divisions over how secular laws should be applied, notably after Islam emerged as the country's second-biggest religion behind Catholicism.

For supporters of a strict interpretation of laïcité, France's version of secularism, Islamic headwear has become a symbol of the politicisation of Islam, subjugation and resistance to the Republic's vision of French identity. 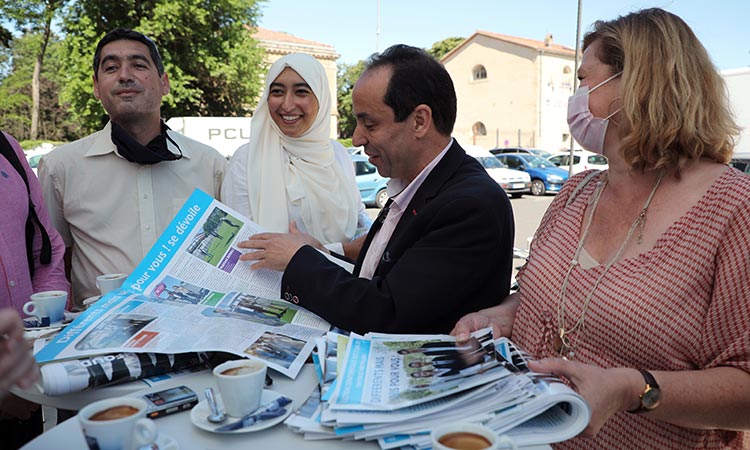 Sara Zemmahi and her fellow group candidates pose for a group photo with campaign flyers at the La Mosson market in Montpellier. Reuters

Laïcité and identity will be central to the campaign battle ahead of the 2022 presidential vote. Opinion polls show far-right leader Marine Le Pen will be Macron's biggest challenger. Mahfoud Benali, who heads Zemmahi's ticket, said France was changing. "I'm in favour of elected officials who reflect society," he said.

Zemmahi is not dogmatic about her headscarf. she often removes it at her laboratory for hygiene reasons. Zemmahi's fellow candidates said the campaign photo was meant to illustrate how they reflected the local demographic.

The affair erupted after the number 2 in Le Pen's Rassemblement National party questioned Macron's credentials as a defender of secular values from what the president terms "Islamist separatism." "Is this how you fight separatism?" Jordan Bardella tweeted along with a copy of the flier.

The LaRem line was that there should be no place for overt displays of religious symbols on electoral campaign documents, Stanislas Guerini, the party's general secretary, responded. Shortly afterwards, he retracted its backing. 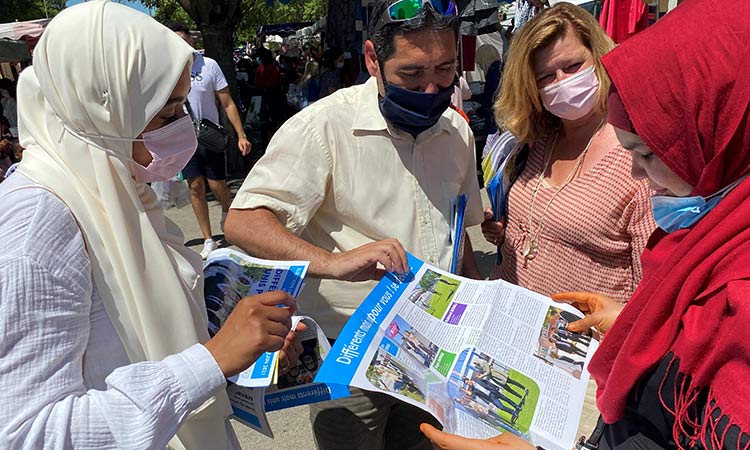 Sara Zemmahi distributes her campaign flyer with the slogan 'Different, but united for you' in Montpellier. Reuters

"The moment you wear a religious symbol on a campaign poster, it becomes a political act," LaRem spokesperson Roland Lescure told Reuters. "I prefer that our candidates and our elected officials speak to all citizens."

French law does not prohibit wearing the hijab or other religious symbols in images on election fliers.

LaRem lawmaker Coralie Dubost expressed regret at her party's stance: "She should have a place in our party whether she wears a headscarf or not."
In the marketplace, housepainter Karim el Ameraouy wished Zemmahi luck. "A veil doesn't stop you being French," he said.
Reuters