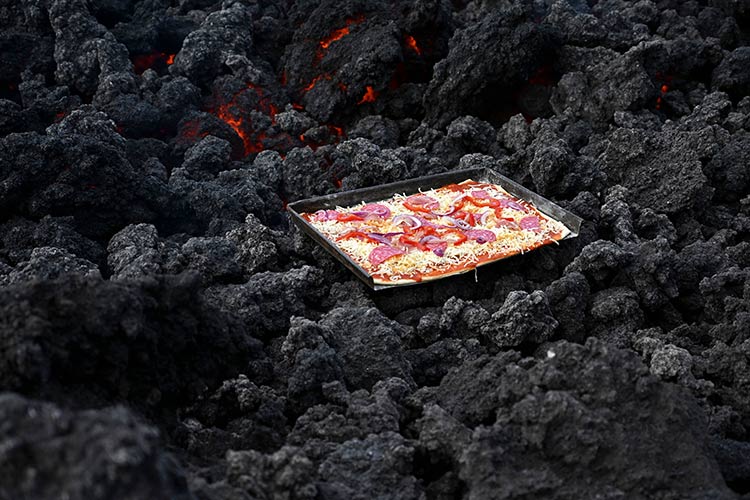 View of a Pizza being cooked on a lava river that comes down from the Pacaya volcano. AFP

Guatemala's Pacaya volcano has been erupting since February, keeping local communities and authorities on high alert.

But for David Garcia, the streams of molten lava oozing down the mountainside have become his kitchen.

Garcia, a 34-year-old accountant, serves up "Pacaya Pizza" cooked on the smouldering volcanic rock to awed tourists and locals.

"Many people today come to enjoy the experience of eating pizza made on volcanic heat," Garcia said from a rocky area that leads to the Pacaya crater, and which he's converted into his workplace.

In his makeshift kitchen, Garcia spreads the dough on a metal platter that can resist temperatures up to 1,000˚C, slathers it with tomato sauce, a generous helping of cheese and pieces of meat. 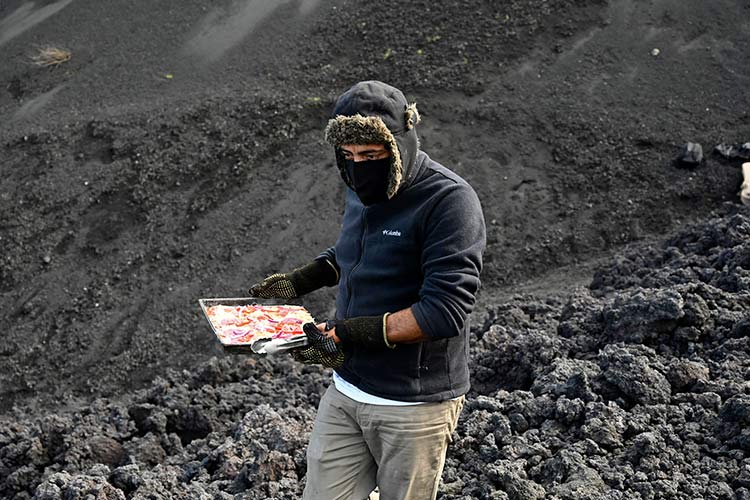 David Garcia places a pizza on a lava river. AFP

Wearing protective clothing from head to his military style boots, Garcia places the pizza on the lava.

"It's done, just let the cheese melt some more," he announces 10 minutes later.

"That pizza looks so good!" exclaims one of the tourists as the cheese bubbles.

Garcia's kitchen has become a magnet for tourists that work up a appetite climbing the massive volcano — one of three active ones in Guatemala — located just 25 kilometres south of the capital, according to AFP.

He first started baking pizzas on the mountain side in 2013 in small caverns he found amongst the rocks. 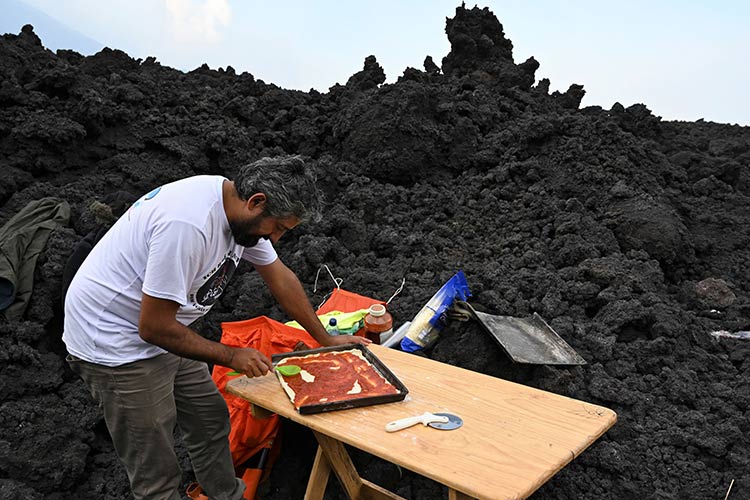 "I didn't sell much the first few days," said Garcia, whose fame has now spread throughout social media.

In recent weeks, with Pacaya regularly spitting out molten rock, he started cooking the pizzas directly on the moving lava, some of which has come close to population centers.

It's a potentially risky undertaking given the plumes of volcanic ash blasted into the sky by the angry beast, to which some local villagers pray, pleading with it to desist.

"Having a pizza cooked in the embers of a volcano is mind-blowing and unique in the whole world," said Felipe Aldana, a tourist trying out one of Garcia's specialities.

He found about the pizza joint on Facebook and thought: "I have to have this experience."

"It's ridiculous just thinking that you're going to eat something cooked on lava, but it's something that you can see only here" in Guatemala, said Kelt Van Meurs, a Dutch visitor.