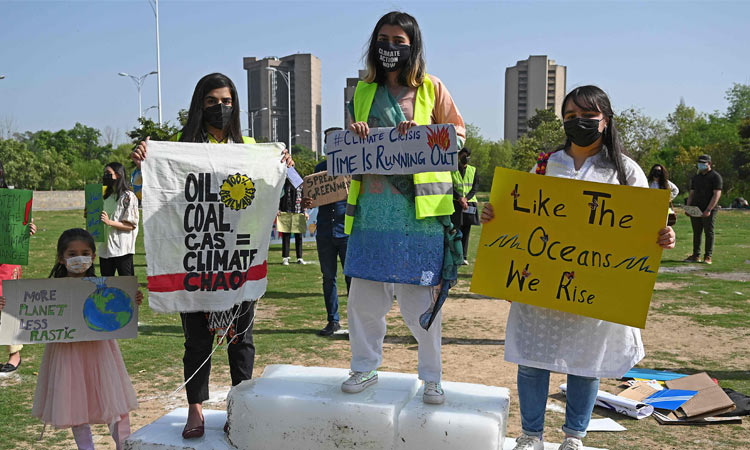 Climate activists hold placards as they take part in a demonstration in support of climate protection movement 'Fridays for Future' in Islamabad on Friday. AFP

A new algorithm-based study by a group of UK universities has predicted that 63 countries — roughly half the number rated by the likes of S&P Global, Moody's and Fitch —could see their credit ratings cut because of climate change by 2030.

They then looked at how the likely negative impact of rising temperatures, sea levels and other climate change effects on countries' economies and finances might affect their credit ratings.

"We find that 63 sovereigns suffer climate-induced downgrades of approximately 1.02 notches by 2030, rising to 80 sovereigns facing an average downgrade of 2.48 notches by 2100," the study released on Thursday said.

The hardest hit countries included China, Chile, Malaysia, and Mexico which could see six notches of downgrades by the end of the century, as well as the United States, Germany, Canada, Australia, India, and Peru that could see around four.

"Our results show that virtually all countries, whether rich or poor, hot or cold, will suffer downgrades if the current trajectory of carbon emissions is maintained."

In an alternative 'RCP 2.6' scenario where CO2 emissions start falling and go to zero by 2100, the rating impact would be just over half a notch on average and the combined additional cost would be a more modest $23-34 billion.

As companies' borrowing costs generally track those of the countries they operate in, their combined annual debt bills were predicted to rise $35.8-$62.6 billion in the higher emissions scenario by 2100 and $7.2-$12.6 billion in the lower one.

"There are caveats, there are no scientifically credible quantitative estimates of how climate change will impact social and political factors," the paper said. "Thus, our findings should be considered as conservative."