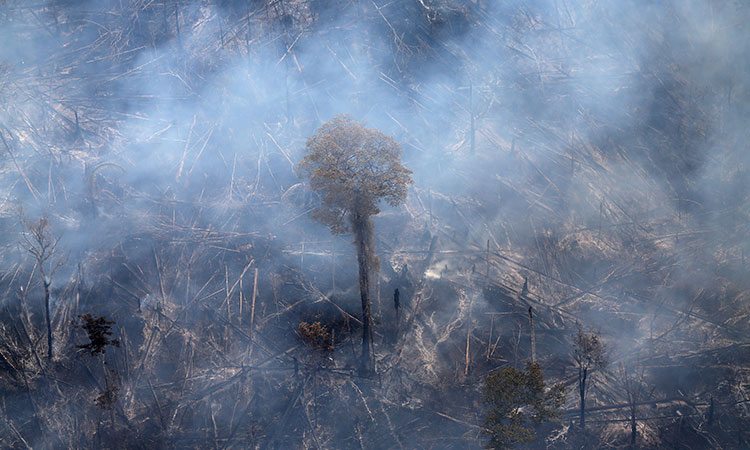 An aerial view shows a tract of Amazon jungle burning as it is cleared by farmers in Itaituba. Reuters

In news that will equally shock and enrage the environmentally conscious, new analysis has revealed roughly two-thirds of the world’s original tropical rainforest cover has been degraded or destroyed by humans.

This has raised alarms that a key natural buffer against climate change is quickly vanishing.

Some 34 per cent of the world’s original old-growth tropical rainforests have been destroyed, and another 30 per cent degraded according to the Rainforest Foundation Norway analysis, Reuters reported.

The forests were being razed for logging and land conversion, largely for agriculture.

More than half of the destruction since 2002 has been in the Amazon region of South America and neighbouring rainforests.

Southeast Asian islands, mostly in Indonesia, was ranked second in forest destruction since 2002.

Destruction in Central Africa was third, mostly in the Congo River basin, due to farming and logging.

Researchers found that the total forest loss between 2002 and 2019 was larger than the size of France.

The forest loss is also adding to the emissions driving global heating as the dense tropical forest vegetation represents the largest living reservoir of carbon.

The author of the report, Anders Krogh, told Reuters that there was a “terrifying cycle” of rainforest destruction adding to climate change which then makes it more difficult for remaining forests to survive.

The Brazilian Amazon has been under intense pressure in recent decades, as an agricultural boom has driven farmers and land speculators to torch plots of land for soybeans, beef and other crops.

Although the trend is concerning, the Amazon along with others in the region, presents the best hope of conserving the rainforest, Mr Krogh told Reuters, as they account for nearly three-quarters of the tropical forests still intact.

Fires burning in Brazil and the broader Amazon basin are shining a spotlight on the role of forests and land use in the climate change challenge. Next week, the California Air Resources Board will hold a hearing that could have a direct impact on such fires.