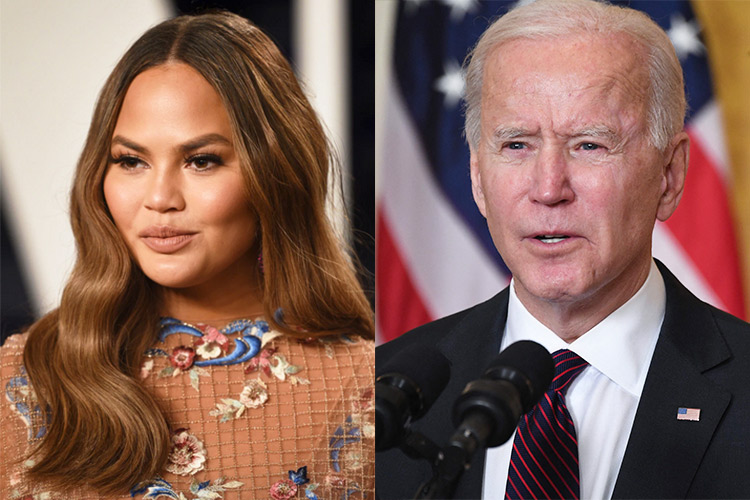 A combo photo of Chrissy Teigen and Joe Biden.

President Joe Biden’s @POTUS Twitter account unfollowed Chrissy Teigen after she made a tongue-in-cheek request that he do so, reports The Independent.

An online relationship that began with a simple: “hello @joebiden I have been blocked by the president for four years can I get a follow plz”, has come to a close, and Teigen is no longer listed alongside the official accounts of Jill Biden, Kamala Harris, or Doug Emhoff, or press secretary Jen Psaki, as those that appear in POTUS’ feed.

On Tuesday (23 February), Teigen tweeted: “I have tweeted a handful of times since my treasured @POTUS following. In order for me to flourish as me, I must ask you to please lord unfollow me. I love you!!! It’s not you, it’s me!!!!”

Though the lifestyle guru and former model didn't specify why exactly she'd wanted an unfollow from @POTUS, some guessed that perhaps her request had to do with not wanting to clog Biden's feed. 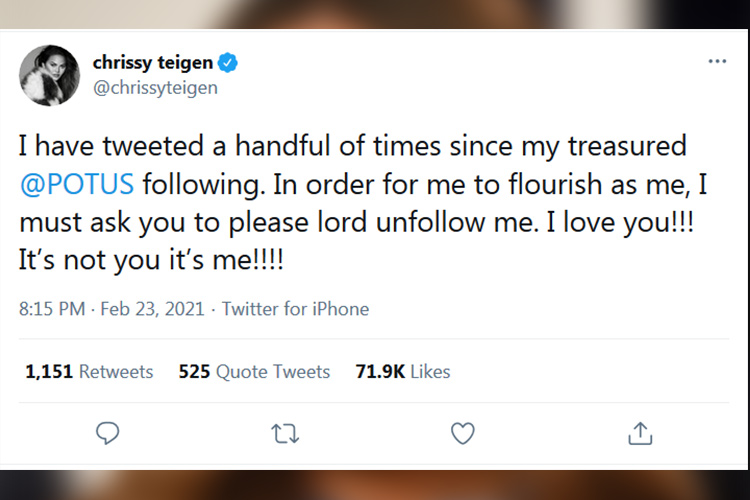 “Same when Jenna Marbles followed me. I would tweet every stupid idiot thought I had and then be like 'oh god, I'm so sorry for clogging your timeline with my stupidity,” one person responded.

Others countered that Biden wouldn't judge the star for her tweets. “Chrissy, if he followed you, he apparently appreciates your kind of Twitter. You do you, boo, and appreciate that you might be giving him some entertainment :),” another fan wrote.

“Umm nah! I think he needs to keep following you. I think he will understand lol. Carry on!,” wrote another fan.

Teigen, who often tweets her political views on the platform, was famously blocked by the @POTUS account when former President Donald Trump was in office.

“After 9 years of hating Donald J Trump, telling him ‘lol no one likes you’ was the straw,” she wrote at the time, acknowledging the block.