Glorious K2 triumph: After years of following Western mountaineers, Nepali climbers are now leading them, in a historic way - GulfToday 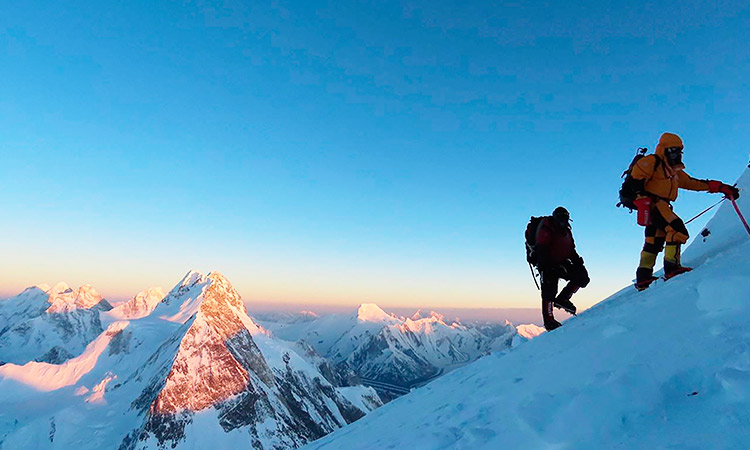 Nepali mountaineers on their way to the summit of Mt K2. AFP

For years they kept a low profile, a mark of their humility and simplicity so characteristic of those who live in the hills or mountains. Nepali climbers have always remained in the shadows, serving as backroom boys in aiding the feats of  Western mountaineers who grabbed all the attention for scaling the world's most treacherous peaks. For decades they did this, until now.

In Gaza parkour brings a taste of freedom to Palestinian youth

It was time for their moment in the limelight, their spotlight of glory, making their way into the record books — and history — by achieving the first-ever winter summit of K2.

Their ascent in mid-January of the world's second-highest mountain — the notoriously challenging 8,611-metre (28,251-feet) "savage mountain" of Pakistan — shone a much-deserved arclight on their own climbing prowess. 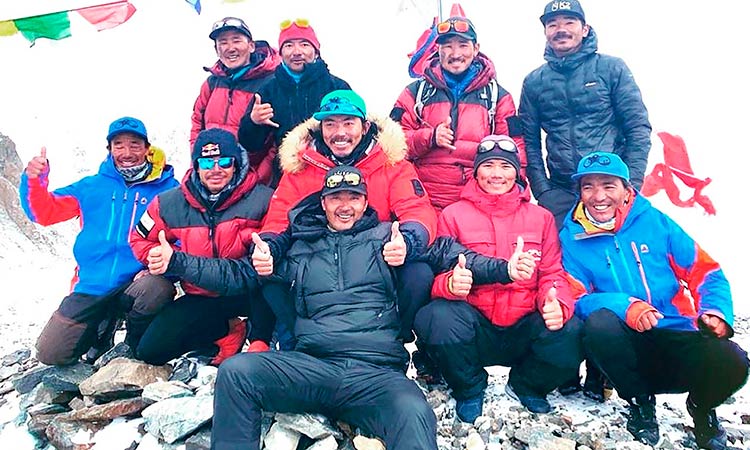 Mountaineers posing for pictures after reaching the summit of Mt K2. AFP

"This is not just our success — it is for all Nepalis, so that our future generations can look back and be proud about achievements of Nepali climbers," one of the 10 summiteers, Mingma Gyalje Sherpa, told AFP.

Kami Rita Sherpa, who has climbed Everest a record 24 times, said the recognition was long overdue.

"The Western climbers did not set the records without the help of Sherpas," he said to reporters in Kathmandu.

"All the routes are set by us, the food is cooked by us, their loads are carried by our brothers — they haven't done it alone." 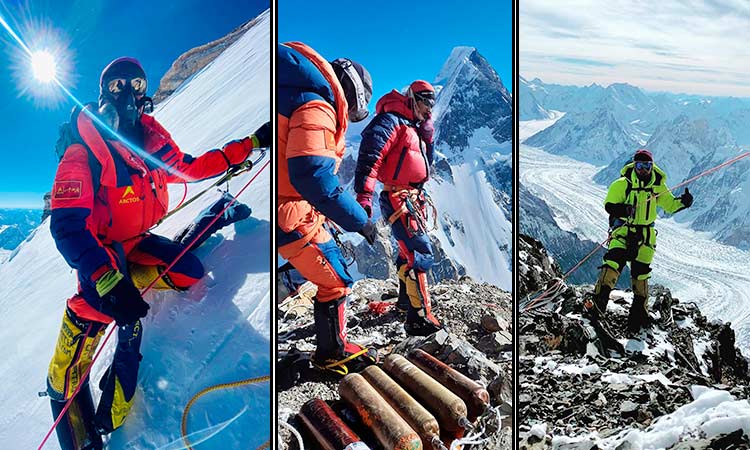 Nepali mountaineers on the way to the summit of Mt K2. AFP

To reflect their immense pride in making the achievement in their country's name, the team sang the Nepali anthem, with their distinctive national flag fluttering in one of their hands, as they neared K2's savage summit.

Since the first British teams set their sights on summiting Everest in the 1920s, Nepali climbers — mostly from the Sherpa ethnic group — have been by their side.

But they did not aspire to reach for the heavens — among Nepal's poorest communities, they risked life and limb to help foreign climbers achieve their life-long ambitions because they needed to feed their families. 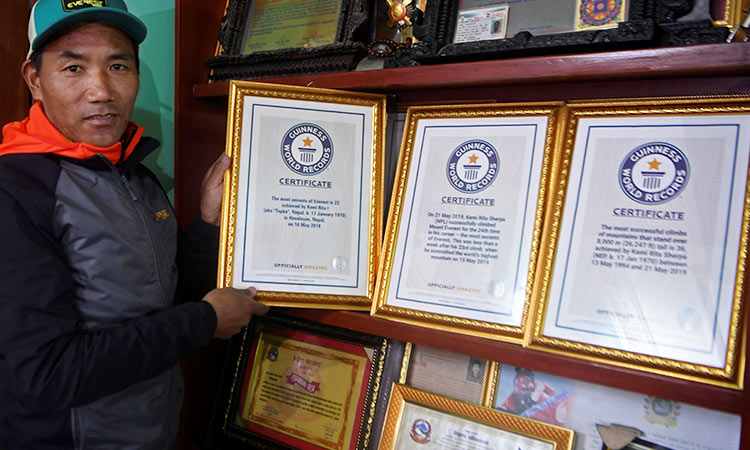 Nepal's mountaineer Kami Rita Sherpa, who has climbed Everest a record 24 times, poses along with his certificates. AFP

Ang Tharkay, who was part of the successful 1950 French expedition to Annapurna — the first recorded ascent of a peak above 8,000 metres — refused to be part of the summit team.

For him, being part of the record books was less important than running the risk of losing his fingers and toes to frostbite, which would jeopardise his livelihood.

The industry has since grown into a lucrative sector, attracting hundreds of foreign climbers each year and bringing in millions of dollars in revenue for the government.

An experienced guide can make up to $10,000 — many times the country's average annual income — for several months of hazardous work.

The risks remain high despite the commercialisation of the sector, with Nepalis hired by foreign climbers making up a quarter of deaths on Himalayan mountains, according to the authoritative Himalayan Database. 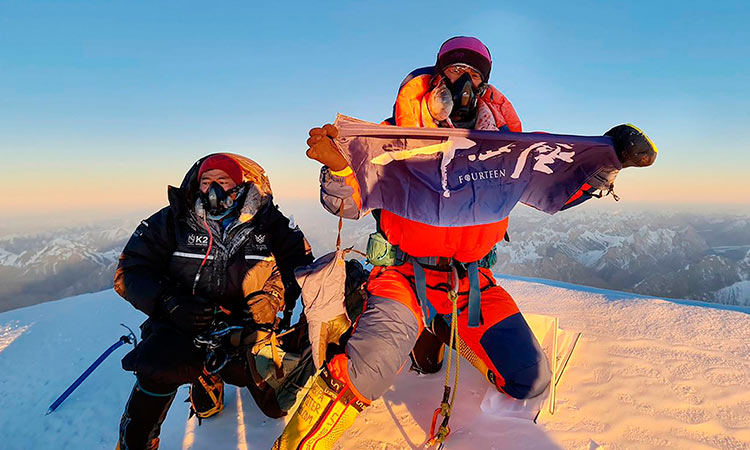 In 2014, an avalanche killed 16 Nepalis who were hauling gear up Everest, triggering an unprecedented shutdown of the season and demands for better compensation and benefits.

The exploits of the K2 team, which included Nirmal Purja, who last year smashed the speed record for summiting the world's 14 highest peaks, reflect the changing approach of modern-day Nepali climbers.

But in the following decades, only four other Nepalis have claimed first summits of the 14 peaks above 8,000 metres, compared to nearly 70 mostly European mountaineers. 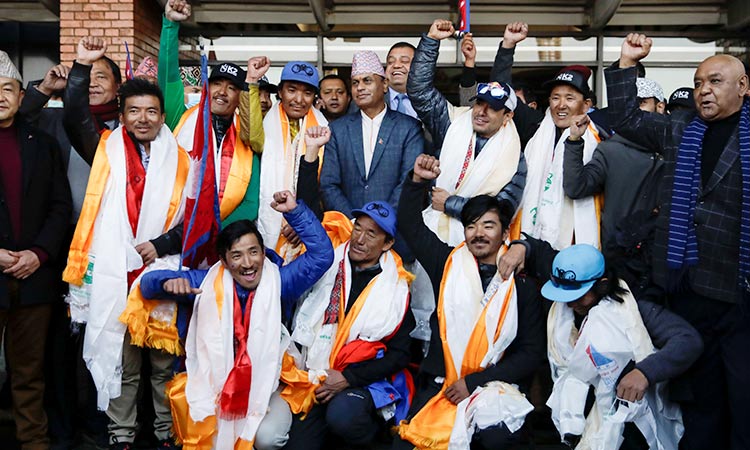 Nepali climbers who were the first to scale K2, the world's second tallest peak, in winter, cheer upon their arrival. Reuters

In recent years, however, climbers like Purja have set record after record, and are hopeful their feats will inspire the next generation of Nepali mountaineers.

"When I heard the K2 news I thought 'finally!'," Messner said, recalling that in his first ascent of Everest without supplemental oxygen in 1978, the Sherpas would follow him as he navigated upwards.

In contrast, today's Sherpas are in front of the climbers, setting routes and guiding them.

"It is an evolution... and this is also important for the future economy of the country."

Alpine journalist Ed Douglas, who has called for better protection for the high-altitude workers, said the climbers deserve credit for "taking control of their own industry".

"There is no question about whether they deserve to have that place on the podium with all the other celebrated mountaineers that have come before us."