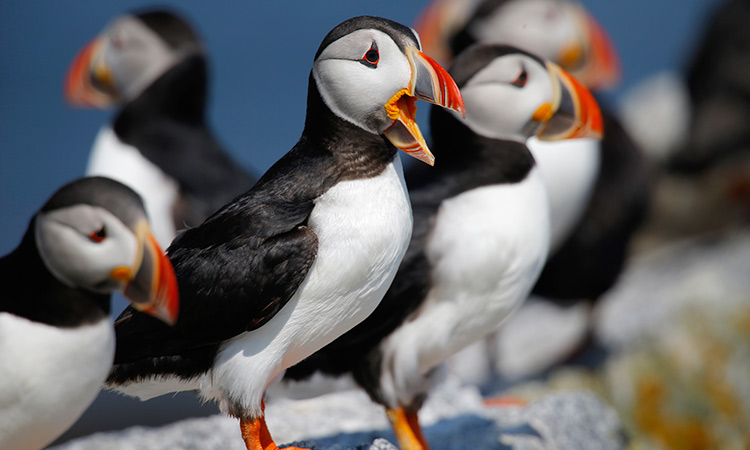 An Atlantic puffins congregate on Eastern Egg Rock, a small island off the coast of Maine. File/AP

It is definitely not a red herring. Puffins, known for their colourful beaks and waddling gait, will be chuffed up over new restrictions to save the herring. The birds are dependent on the fish for survival.

The commercial fishery for herring has suffered in recent years due to new restrictions, but those same rules could benefit some of Maine's most beloved birds —puffins.

Atlantic puffins, known for their colourful beaks and waddling walks, were once nearly gone from Maine, the only US state where they nest. Decades of conservation work have brought Maine's population of the birds to about 1,300 pairs that nest on small islands off the coast.

Those same Gulf of Maine waters are an important area for the US herring fishery. The fishery has had to contend with quota cuts in recent years because of federal efforts to protect the fish's population, and more restrictions are on the way. 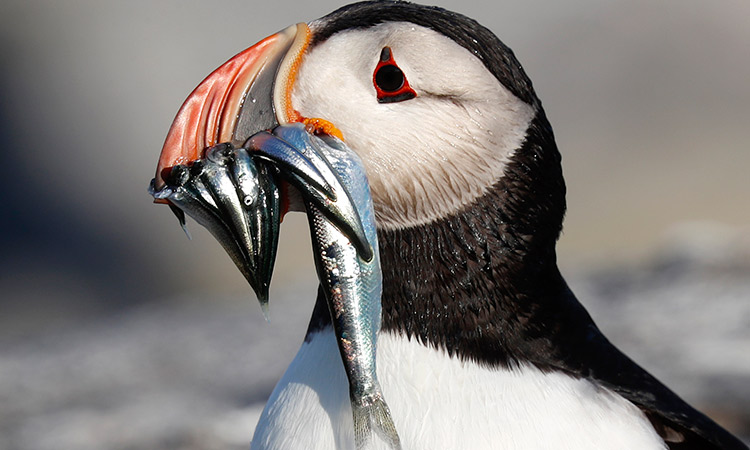 An Atlantic puffin carries bait fish it will feed its chick. AP

Puffins are dependent on small fish to survive, and new protection to the herring population could help them do that, said Don Lyons, director of conservation science for the National Audubon Society’s Seabird Institute in Bremen, Maine.

"Herring are certainly a key food source for puffins. The kind of fish they do best on, that they best raise chicks feeding,” Lyons said. "The decline of herring over the last decade or longer have not been good for puffins.”

The herring fishery is facing a new set of restrictions from the National Oceanic and Atmospheric Administration starting on Feb.10. The restrictions include a prohibition on the use of certain fishing gear in inshore waters. They also include new rules that account for herring's role in the ecosystem, federal documents state.

Herring are economically important because lobster fishermen have used them to bait traps for generations. Shortages of herring have complicated that in recent years, and bait crunches have resulted.

The herring fishery is hopeful for higher catch limits in the future, but 2021 and 2022 could be difficult years, Tooley said.

"A number of businesses are concerned about their ability to be viable,” she said. "In the very near short-term it has been a challenge.”

The puffins nest in the summer on islands such as Eastern Egg Rock off Maine's mid-coast region, where they are a popular tourism draw. Lyons described the birds' Maine population as "steady” over the past five years, if not possibly a bit larger.