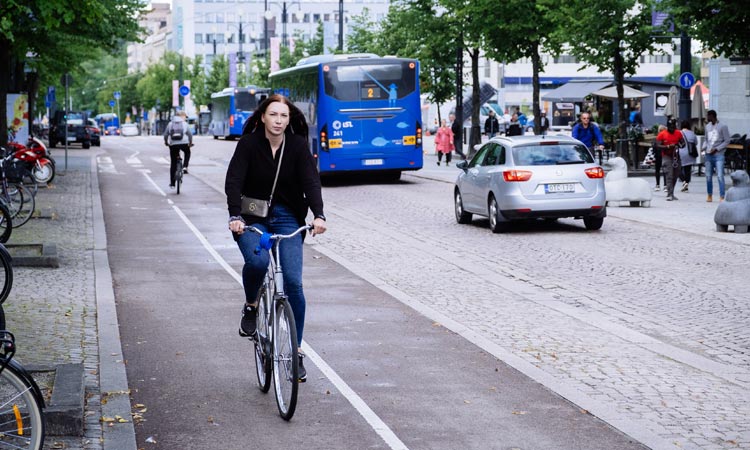 A cyclist rides in Lahti, where a pilot project is implemented to quantify the personal carbon footprint. AFP

Inhabitants of a town in Finland can now earn rewards, including bus tickets or free food, if they cut car use, under a scheme to lure the public into lower-carbon lifestyles.

The EU-funded "CitiCap" project allows individuals in the town of Lahti to track their carbon emissions as they move around, using an app that detects whether they are in a car, on public transport, walking or cycling. 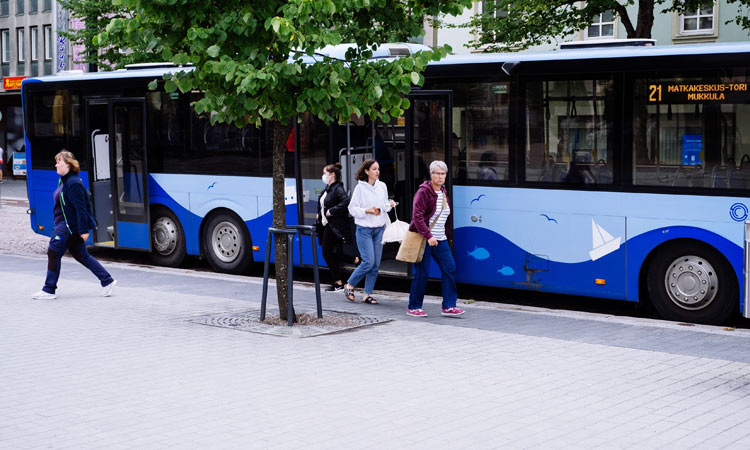 People get off a bus in the city centre of Lahti. AFP

Anyone who uses up less than their allocated carbon allowance each week earns "virtual euros", tradable for benefits such as swimming or bus tickets, as well as free bike lights or a slice of cake and a coffee at a cafe.

"Lahti is still a very car-dependent city and our goal is that by 2030 more than 50 per cent of all trips are made by sustainable transport modes," project manager Anna Huttunen told AFP. The current figure stands at 44 per cent.

Yet the project's wider aim is to develop a new method for encouraging greener behaviour, using a "personal carbon trading" system that other cities can copy.

"CitiCap has gained a lot of interest all over the world, not only in Europe but also in the US and Canada," Huttunen said. 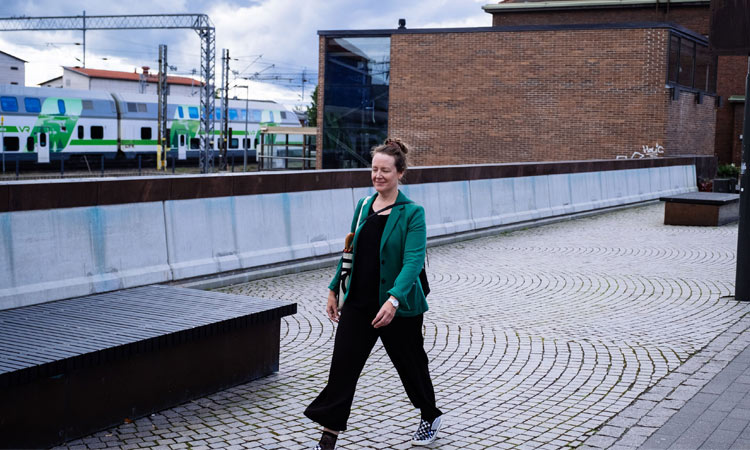 Mirkka Ruohonen, who works for the municipality and is an user of the CitiCAP app, walks in Lahti. AFP

The concept is modelled on the EU's carbon trading scheme, under which companies and governments are allocated carbon credits, and must pay to pollute more than this amount, or can sell off any surplus if they emit less.

The CitiCap app gives each participant a weekly carbon "budget" based on their personal circumstances.

The average person in Lahti, a town of 120,000 inhabitants lying an hour's train ride north of the capital Helsinki, "emits 21kilos of CO2 equivalent a week," Ville Uusitalo, the project's head of research, told AFP.

The app challenges users to reduce this by a quarter, meaning on average replacing 20km of driving with public transport or cycling. 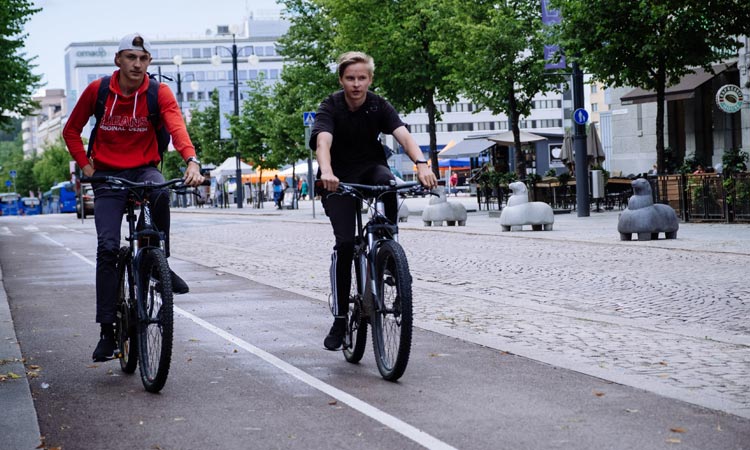 "It's possible to earn two euros if your mobility emissions are really low," Uusitalo said.

"But this autumn we intend to increase the price tenfold," he said.

The coronavirus lockdown led to a drastic drop in car journeys, meaning the project's researchers cannot yet discern the impact of the app.

But they will continue to collect data next year, when Lahti will also be crowned the "European Green Capital."

"People find it very interesting to see their own emissions," Huttunen, the project manager, said.

City council worker Mirkka Ruohonen, who has been using the app for around seven months, said she was surprised to see the impact of her own travel. 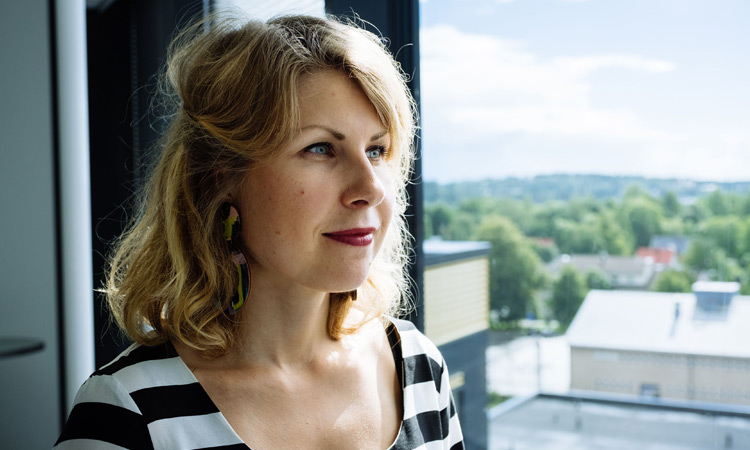 Anna Huttonen, project manager for sustainable mobility for the city of Lahti, poses during the interview. AFP

"I went for a hiking weekend and we did 15 kilometres of hiking, but I had to travel 100 km by car," she told AFP.

"After that I checked the app and I was like, 'Was that a good thing?' Maybe for me but not for the environment!"

However Ruohonen has not yet managed to earn any bonuses as she does not own a car, meaning she has less scope for lowering her emissions.

Ruohonen said that she was unfazed by the privacy implications of an app that records all her travel.

"I think all the apps that I use collect some information," she said.

Huttunen said that the app meets the EU's data regulations, and that external bodies will not be allowed to analyse the data.

The scheme's creators hope it can in future help people manage their emissions related to food and other consumption too.

"Mobility is only one part of our carbon footprint," Uusitalo said.

"There are many options for how you can put personal carbon trading into action." 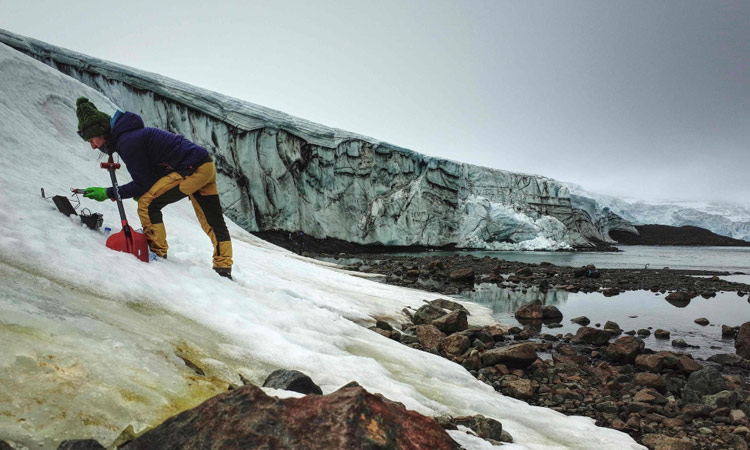 Parts of the Antarctic Peninsula will change colour as "green snow" caused by blooming algae is expected to spread with increases in global temperatures, research showed on Wednesday.