VIDEO: See how a clever goat uses a buffalo to acquire food - GulfToday 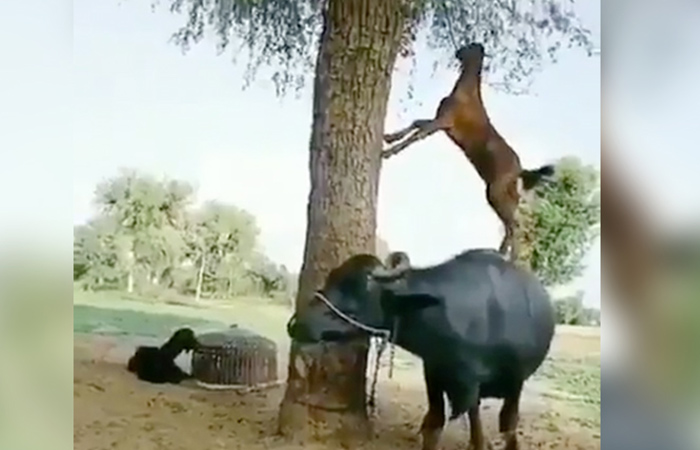 The goat on the buffalo's back trying to reach for food.

Improvising may not be the hallmark of its nature, but this goat had the social media in splits with its innovative way of acquiring food.

As the saying goes, “Necessity is the mother of invention.” The goat had the presence of mind to pull off the feat with utmost accuracy.

However, the buffalo had no interest in the goat’s deed, but users of social media went on a rampage.

Ever since the video appeared on the platform, Twitterati had a ball.

D. Kashyap responded to Sudha’s video and said, “Mam... where did u find this video?? Such an entertaining and inspiring…”

Koalas may be extinct in Australias New South Wales by 2050

A user with the name, “Banker Yuva” said, “Corporate culture of travelling on others’ shoulders and grabbing their opportunity.”

Kamal Banerjee found some rational base in the clip. He said, “There is a lesson for all of us here. When your target is out of your reach, break and leap. Dragon solution :)”

Rajesh Mudras became satirical and said, “Politician in the making…”

Krishna asked, “Did it share anything with the buffalo?”

A user with the name, Maestro Torero said, “Necessity is the mother of invention.”

Manoj was annoyed with how we treat goats. He said, “And how we behave with them…”

Sri said, “Co-operation is part of nature, down to the cellular level."