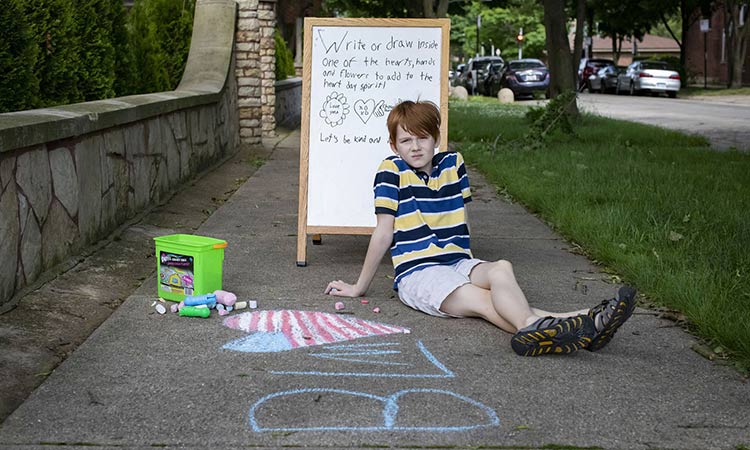 Aiden Kelley takes a break from chalking the sidewalk. TNS

Nine-year-old Aiden Kelley knows that George Floyd died in police custody, that an injustice was committed, and that other black people have died under similar circumstances.

What he doesn’t understand is why.

It was in that spirit that Aiden grabbed a box of chalk earlier this month and held a protest of his own. He decorated the sidewalks in front of his Chicago home with hearts, flowers, flags and messages of unity, and invited passers-by to add to the art.

Then he picked up a Black Lives Matter sign fashioned from a piece of paper and a ruler and marched down the street in a parade of one.

A neighbour’s photo of Aiden, with his flame-red hair and back-to-basics sign, went viral on Twitter, with over 680,000 likes so far, one of many signs of the power — both symbolic and practical — of the solo protests popping up across America in recent weeks. Examples on social media include a Minnesota mom who protested alone because her friends didn’t want to join her, and a man standing at an intersection in Peachtree City, Georgia, with a grim but determined look on his face.

In Illinois, 18-year-old Anya Sastry’s solitary protest in the wealthy, mostly white suburb of Barrington led to a protest that drew hundreds on June 6.

Faith Jones, who is white, has been protesting after work in Lincoln, Illinois, about three hours southwest of Chicago, hoping to build a better world for her 6-year-old son, whose father is black. 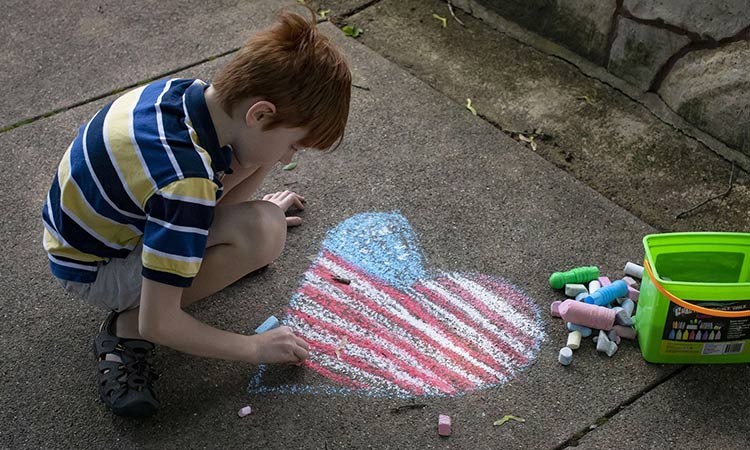 And Kelley, who protested again last Saturday, has spurred interest among his school friends, some of whom have shared plans to lead their own solo protests.

On social media, some observers have compared the lone protesters to teen climate activist Greta Thunberg, who began her career with solo demonstrations in front of the Swedish parliament building, or the lone Tiananmen Square protester who stood in front of a column of Chinese tanks.

According to University of Chicago associate professor of history Adam Green, these wide range of lone protesters, young and old, rural and urban, directly affected or newly awakened to the suffering of strangers, is a testament to the increasingly broad appeal of the Black Lives Matter movement.

“The 9-year-old boy is every bit as significant as somebody who writes an eloquent op-ed in your newspaper — or any newspaper,” Green said.

“When a young child does that, they’re saying my conscience is touched, I’m disturbed by what I sense around me, and I’m prepared to act in order that it can be different.”

When neighbours told Katya Kelley that her 9-year-old son Aiden was trending on Twitter, she told them that was impossible.

As it turned out, he didn’t need one. A neighbour’s blurry snapshot of Aiden marching down the street with his Black Lives Matter sign was already drawing widespread support.

Many applauded Aiden, with fans black, white and brown calling him “soooo adorable,” worrying that he’d get a sunburn, and proclaiming “I’m not crying, I have allergies!!!” Some supporters also saw a broader trend.

“Really loving the individual photos of lone protesters, many who are elderly, immuno-compromised, are front line workers, or are otherwise unable/worried about joining in crowds just … standing alone in solidarity,” a Twitter user wrote.

Aiden’s mom said that he’s a typical bighearted 9-year-old. He loves art and space travel, and hopes to be an astronaut when he grows up.

He lives in a diverse neighbourhood and goes to a diverse school, but he corrects his mom when she says he has friends of all races.

There’s just one race, he tells her: the human race.

In an interview with the Tribune, Aiden said he was a little nervous when he started his solo protest, but it felt great when people started pitching in and drawing chalk hearts on his sidewalk.

“I wanted everyone to participate and not just have one person, like, draw one heart and have nobody else be able to do it,” he said.

“And I wanted to spread love and kindness and inspire others.”