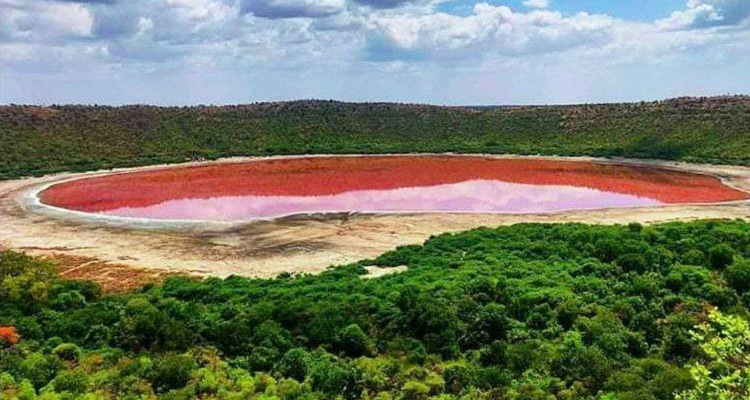 The formerly green crater lake has turned pinkish-red, possibly due to the presence of unusual bacteria. Twitter.

The world population isn't really in the pink of health in light of the coronavirus pandemic, but a salt water lake in India which was green in colour, has now turned pink, baffling locals.

Lonar Lake situated in Buldhana, about 483 kilometres east of Mumbai in the state of Maharashtra, is a body of water formed by an impact crater from a meteor which struck the Earth some 50,000 years ago.

In recent weeks, the colour of the water in the crater has changed from an unremarkable green to a more remarkable reddish pink tinge.

It is thought changes to the salinity of the water may be partly responsible for the recent colour alteration, while the presence of unusual bacteria may also play a role.

Due to dry weather the lake has also become shallower.

In a video posted to Maharashtra Tourism's Twitter feed, local geologist Gajanan Kharat said the colour of the lake had changed in the past, but had not done quite so vividly. 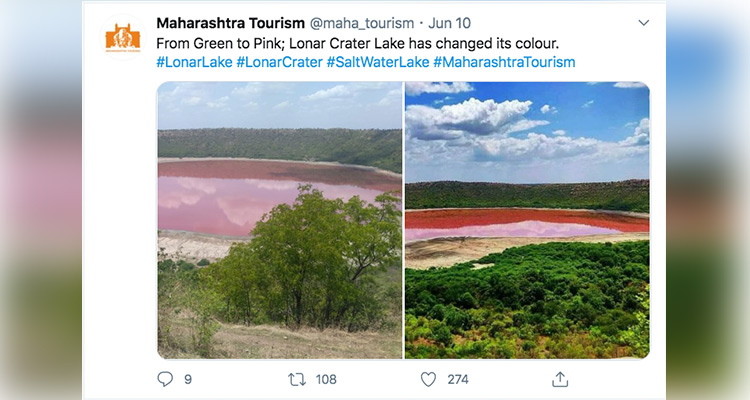 “It's looking particularly red this year because this year the water's salinity has increased,” he said.

“The amount of water in the lake has reduced and the lake has become shallower, so the salinity has gone up and caused some internal changes.”

Scientists have taken samples of the water for analysis, which will reveal the main reason for the colour change.

According to The Times of India, the lake is famous for being the world’s largest basaltic impact crater.

The paper quoted MN Khairnar, deputy conservator of forests for the region, who said: “We are observing the phenomenon to such an extent for the first time.

We will collect samples of the lake water for testing to find the reason behind the occurrence.”

As fires ravage the amazon indigenous tribes pray for protection

Students speak up on environment preservation

Experts have reportedly noted that Lonar Lake is a highly alkaline body of water with high salinity, and its chemistry supports the growth of a family of bacteria known as halobacteriaceae.

These organisms thrive in highly saline conditions, and some produce a red pigment called bacteriorhodopsin which absorbs sunlight and converts it into energy.

When halobacteriaceae bloom in large quantities, the body of water they are in may therefore take on a reddish hue.

The Times of India also quoted the principal chief conservator of forests & Melghat Tiger Reserve (MTR) field director MS Reddy, who said a similar phenomenon has been observed at the Umria lake in Iran.

He said: “With (the) monsoon, the water level will increase and water temperatures will go down turning the lake water back to its normal colouration.”