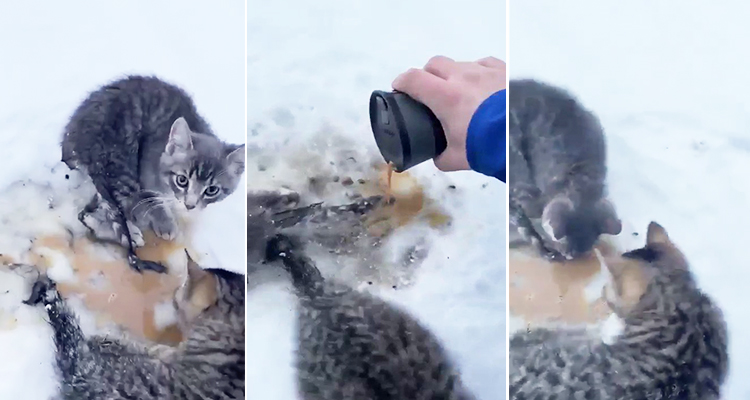 A video of a Canadian man is doing the rounds on the internet in which he could be seen using a cup of coffee to free three kittens whose tails were frozen to the ground for hours after being abandoned.

Facebook user Kendall Diwisch shared the heartwarming story along with a video of himself captioned, "So today I found these three fellows on one of the back roads near one of my wells. Most likely dropped off.

Poor things were frozen into the ice so they had to have been there all night. Took them home, fed and watered them they look to be healthy and friendly. If any friends are looking to have a new addition in their family, let us know as they will need homes. All three look to be males, and we also gave them dewormer."

In the video, the kittens are seen huddled together on the ground desperately meowing as Diwisch approaches them. After that he poured warm coffee around the cats to help free their tails from the ice. As the post went viral, social media users hailed him as a hero for rescuing the kittens.

A user wrote, "So great you found a home for all three together. Thank you."

Another wrote, "Forget superman, you're a real hero! Thank you so much for rescuing the little sweethearts. Fate in humanity (a bit) restored."

A post read, "You sir are my hero and an angel. How beautiful a soul you are! Made me cry tears of joy that you rescued those beautiful kitties! What a heart you have, I have a new found hope for humanity!"

A Tweeple remarked, "Awesome update so happy all are together in a new home and doing well."

Diwisch later updated the post to say that they'd been adopted. "All three little rascals went to their new home today where they get to be together instead of separating them," he wrote.

"All three are eating and drinking and very energetic. Thanks for everyone's consideration and offering to take them very appreciated," he added.