Items made with feathers are pictured at the workshop of Italian feather artisan Gianni Bracciani.

Feathers have adorned the most glamorous of fashionistas throughout history, from Marie Antoinette to Lady Gaga, and one Italian octogenarian continues to fuel the fantasy.

"Feathers, for me, are my passion," said 89-year-old Gianni Bracciani, who comes every day to his workshop in Santo Stefano Ticino, about 30 km (19 miles) west of Milan, to dream up new uses for the colourful, wispy plumes.

Bracciani has no intention of retiring after a lifetime in the fashion industry where feathers have played a starring role. A-listers and renegades have embraced his creations, designed in collaboration with the world's top fashion houses and donned by the likes of Angelina Jolie, Celine Dion, Naomi Campbell and Jennifer Lopez. 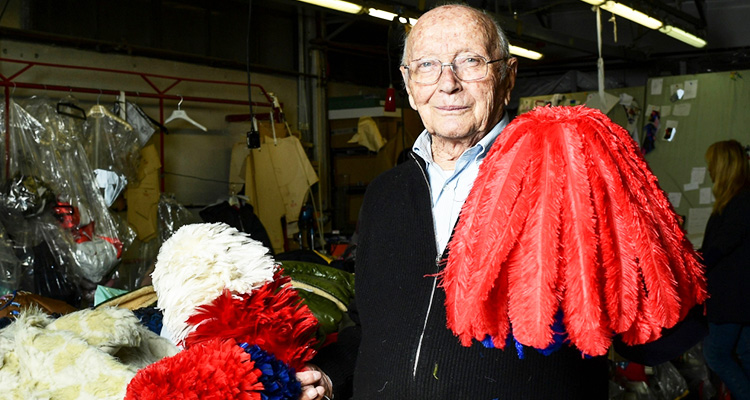 Italian feather artisan Gianni Bracciani poses with some of his creations made with feathers.

Feathers are a family affair for the artisan, who works today with his daughter Emanuela, 51, and nine employees at "Bracciani Piume," a business that generates 2 million euros ($2.2 million) in sales each year.

The business dates back to 1883, when Bracciani's grandfather began importing from Paris haute couture items, and then feathers which he sold throughout Italy to milliners, shoemakers and tailors.

His father then took up the business, enlisting 15-year-old Bracciani to help with packing, and later to look for new clients in Europe, especially France.

When he took over the business with his wife Lucia, Bracciani made the strategic decision to focus on feathers for clothing. The top couture houses of Italy, France, Britain and the US then quickly came calling. 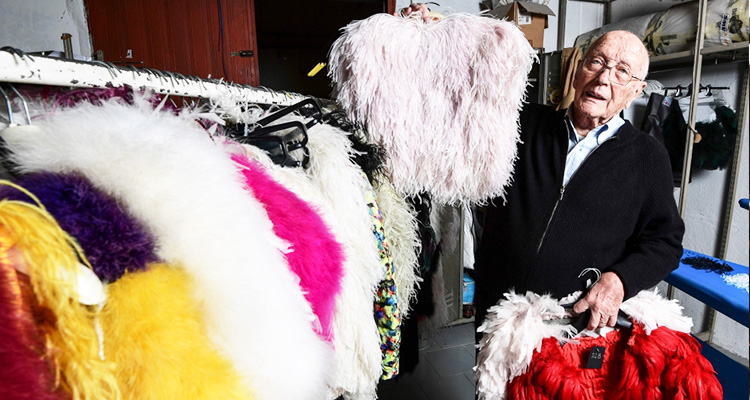 Feathers have adorned the most glamorous of fashionistas throughout history, from Marie Antoinette to Lady Gaga.

With rolls of billowing fabric and multi-coloured feathers at every turn, Bracciani's workshop is a veritable Ali Baba's cave.

In one area, a machine blows feathers into sheets of fabric that will end up as luxury down jackets sold in Russia, Japan and China.

The atelier creates the impressive red and blue plumes that top the formal hats of the Italian carabinieri police. It also receives extravagant requests, such as that from a dancer who wanted a bed made entirely of feathers.

As well as being an artisan, Bracciani is an inventor, having designed a dozen or so machines specifically for feathers, and developed over 2,000 ways of dying them, because not every feather takes to colour the same way. 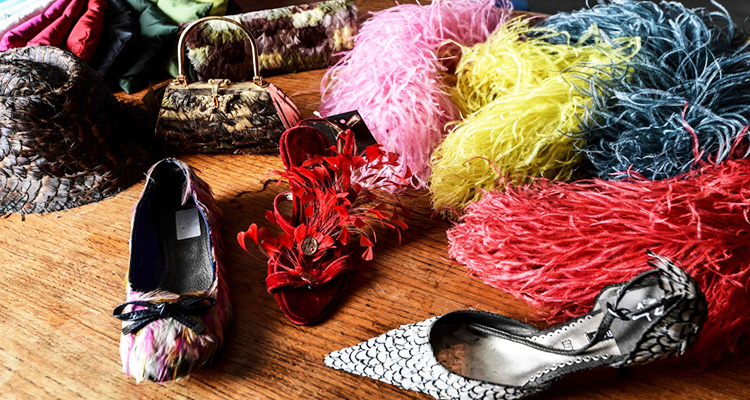 Items made with feathers are pictured at the workshop of Italian feather artisan Gianni Bracciani.

The problem today, he said, is finding good quality feathers as factory farming means birds are slaughtered before their feathers have fully matured, a process that takes for example two years for roosters.

Ostrich feathers are cut from the birds when still alive.

Besides being an encyclopedia on feathers, Bracciani is also full of ideas, his daughter Emanuela says.

"Working with my dad is incredibly fun but also very tiring. He's creative, he starts lots of projects but rarely sees them through," she winked, adding that it was her role, like that of her late mother before her, to finish them. 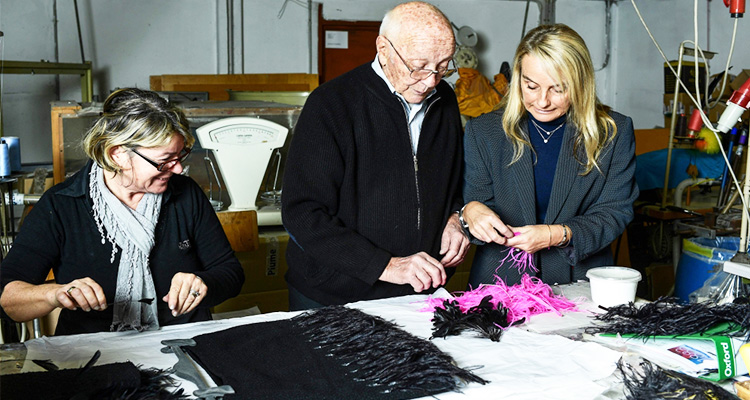 Feather artisan Gianni Bracciani (C) works with his daughter Emanuela (R) and an employee at his workshop.

She is hoping her 17-year-old son will take over the business one day.

In the meantime, one of the workers, Dani, 62, glues black ostrich feathers onto an elegant miniskirt, explaining that she has spent four decades with the company.