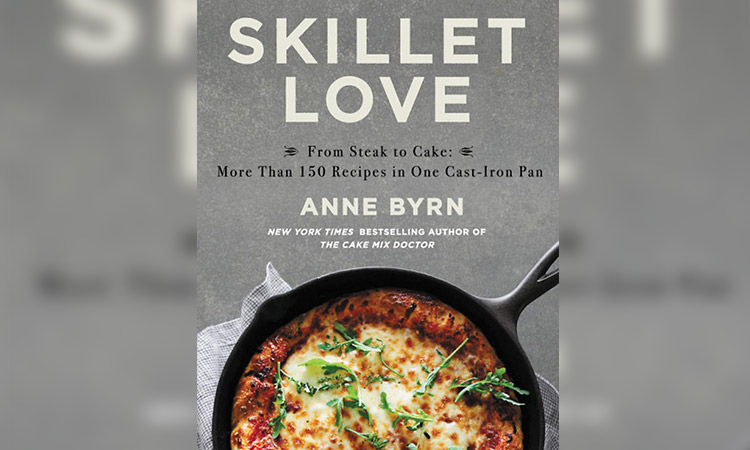 Skillet Love: From Steak to Cake: More Than 150 Recipes in One Cast-Iron Pan" by Anne Bryn. TNS

With the acquisition of one of my grandmother’s 10-inch cast-iron frying pan with a near Teflon-level of seasoning, I now have three heavy-bottomed skillets on my stove right now.

That’s a lot of skillets to keep out at all times, but I don’t have to explain myself to Anne Byrn.

Byrn, best known for her “Cake Mix Doctor” books, has a new cookbook out dedicated to cast-iron skillets called “Skillet Love: From Steak to Cake: More Than 150 Recipes in One Cast-Iron Pan

As a dessert specialist, the Nashville-based Byrn had to include a few cake and cookie recipes, but she also takes readers through breakfast, lunch and dinner with 150 recipes, from fried green tomatoes to frittatas and hamburgers and scalloped potatoes.

I most frequently use my cast-iron skillet to quickly sear meats. Sausages, steaks and pork chops, I’ll cook entirely in the pan, but other cuts, like pork tenderloin, I’ll finish in the oven. Byrn’s recipe for lamb chops calls for cooking them in batches in the skillet and then serving them with a tomato and mint slaw. You could serve this main dish with hummus and pita bread,

For the tomato and mint slaw:

Put the lamb chops in a single layer in a 13-by-9-inch glass dish. Season both sides with the garlic, salt, pepper and harissa.

Heat a 12-inch skillet over medium-high heat until nearly smoking, 3 to 4 minutes. Add the vegetable oil to the pan. When it is hot, sear half of the lamb chops until well browned, 3 to 4 minutes per side for medium-rare. Do not move the lamb chops while they sear on each side. With tongs, pick up each lamb chop and sear around the edges. Transfer to a plate and repeat with the remaining lamb chops.

For the slaw, put the tomatoes in a mixing bowl and season with salt and pepper. Add the mint leaves and lime juice. Drizzle in the olive oil and add the pepper flakes. Toss to coat.

Garnish the lamb chops with fresh mint sprigs. Serve with the slaw alongside, plus a dollop of yogurt. Serves 3 to 4.