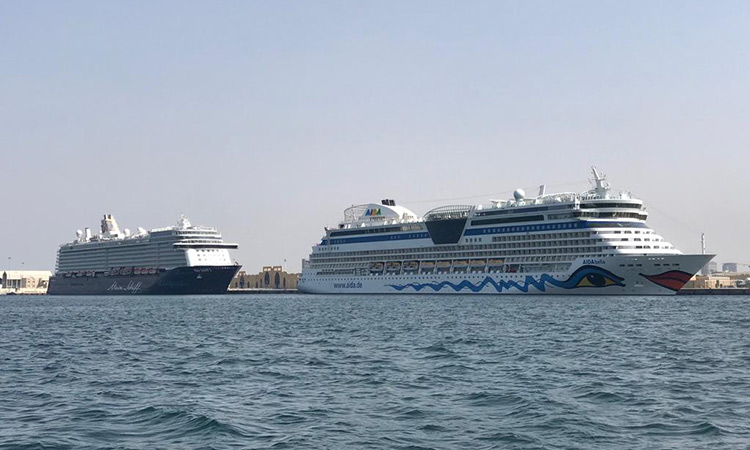 The new cruise season commenced on Oct.19 with the arrival of TUI Cruises’ "Mein Schiff 5," carrying over 6,000 passengers. WAM

Dubai has stepped up its drive to attract more cruise travellers and strengthen its position as a leading "cruise hub of the region," and is expecting to welcome more than 200 ship calls and an estimated one million cruise visitors this cruise season.

Guests dance on the GuGu boat during a private party opposite the skyline of the Marina Waterfront in Dubai.

Gulf Arab visitors in their traditional "Kandora" pass by giant skyscrapers at the Marina waterfront in Dubai.

As the early morning fog lifts, a woman jogs in front of giant skyscrapers at the Marina waterfront in Dubai.

Tourists of different nationalities board a dhow for a cruise as the sun sets in the Marina neighbourhood of Dubai.

Children enjoy playing in a fountain at the Marina waterfront in Dubai.

A waiter carries a tray of traditional Arabic food at a restaurant by the water canal at the Marina district, in Dubai.

Two men play backgammon while smoking a shisha, or water pipe, at a restaurant overlooking the canal and the Marina neighbourhood.

Mohammed Al Muallem, CEO and Managing Director, DP World UAE Region, said, "DP World UAE Region is committed to developing Dubai’s cruise industry to its maximum potential in line with the goals set out in the Dubai Silk Road strategy which was developed by the Ports, Customs and Free Zone Corporation in collaboration with key government entities."

Mohammed Abdul Aziz Al Mannai, CEO-P&O Marinas and Executive Director, Mina Rashid, said, "Mina Rashid’s status as the premier cruise port of the region is reflected in not just the number of tourists sailing in on an annual basis, but more importantly, the rising number of cruise liners making this their preferred homeport. They are here because of the continuous improvements that we make to the facilities and our customer service at our luxury terminals, led by the flagship Hamdan Bin Mohammed Cruise Terminal."