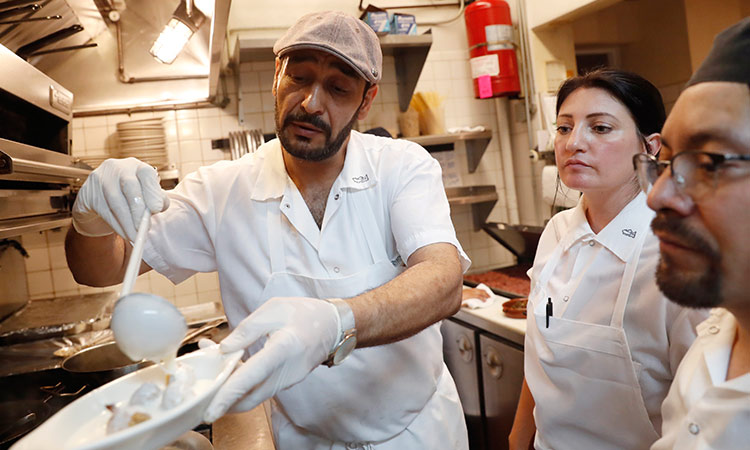 There was one thing he was fairly certain of, though — whatever else the future held in store for him and his family, he was pretty sure it was going to include food, a constant in his life since he had left school at 15 to work in an uncle's restaurant in Damascus.

He's working in a restaurant these days — his own. Along with a partner, Alhanoun, 48, is the chef behind the recently opened Sakib, a small corner outpost on Bedford Avenue in Brooklyn's Williamsburg neighbourhood, where he turns out the Mediterranean food he learned to cook as a teen.

"I have this idea, I wait for I learn English, I see how people eat," Alhanoun said in the sometimes-halting English he's learned since his arrival in October 2016. "Before I come here, I think future, I want restaurant."

Diaa Alhanoun offering his wife's homemade cookies to passers-by outside his restaurant. AP

A Syrian refuge chef, pauses to pray, with his two sons. AP

A special menu for the Refugee Food Festival on a candle-lit table. AP

Food has taken him all over the world — he helped open a restaurant in Russia in his 20s and another a few years ago in Sudan, along with catering work he did while living in Syria. His maternal grandfather had a restaurant, as did five of his mother's six brothers, including the one where he learned to cook.

Alhanoun left Syria in 2012 for his restaurant opening in Sudan, but by the time he tried to go back some months later, fighting had broken out in Damascus.

He sold that business and fled to Jordan with his wife, children and other relatives, then came to the U.S. through a United Nations program that helps displaced persons re-settle in other countries.

Today, Alhanoun lives on Staten Island with his wife and children, ages 18, 17, 9 and almost 2. 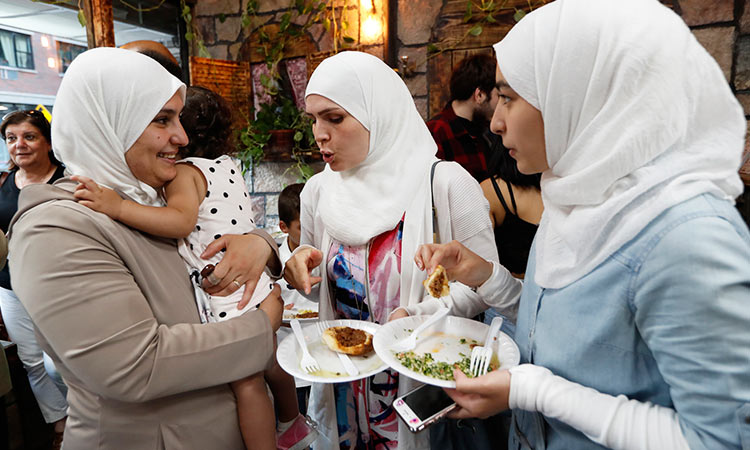 He spent two months working at a hat factory, but food once again came calling, and he started working in a restaurant.

Alhanoun was introduced to Eat Offbeat, a catering company that hires refugees and teaches them culinary skills, and offers their recipes in the food available to customers. Through Eat Offbeat, Alhanoun participated in events like the Refugee food Festival, where he was able to cook a meal in a restaurant kitchen.

Alhanoun is the first from Eat Offbeat to open his own operation.

"Since the first day he joined, we knew Diaa was going to get his own place at some point," said Manal Kahi, co-founder of Eat Offbeat. "We're all super proud of him, it's a great example for everyone else at the kitchen." 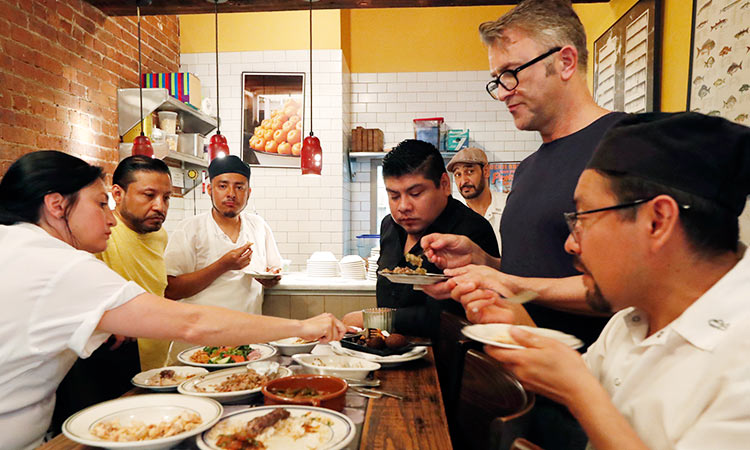 Fighting in his old home, Damascus, has largely ceased since the Syrian army drove rebels from areas around the city a year ago, but it remains economically devastated by the war.

Alhanoun said he initially thought the strife wouldn't last and he would be back in Syria in only a matter of months. But his focus now, he says, is on his new home and the possibility of opening more restaurants

Of all the places he's lived, Alhanoun thinks New Yorkers have liked his food the most, and he's hopeful about what the future could hold as he builds a new life here.

His dream now? A big restaurant that holds a lot of people, and a good future for his children.