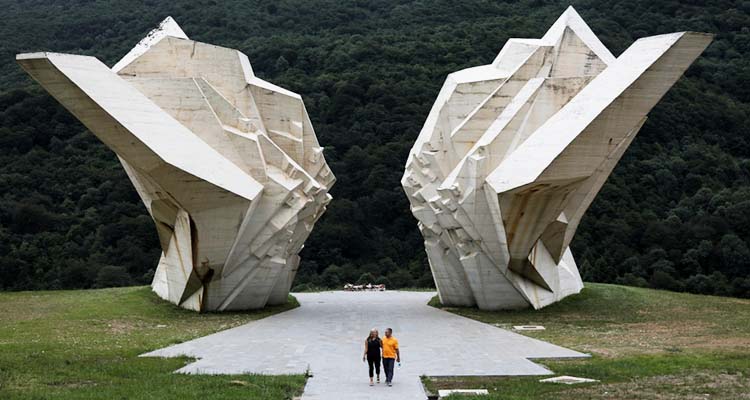 A couple walks in front of the war memorial monument "Battle of Sutjeska" in Tjentiste, Bosnia and Herzegovina.

Genex Tower is unmissable on the highway from Belgrade airport to the centre of the city.

Its two soaring blocks, connected by an aerial bridge and topped with a long-closed rotating restaurant resembling a space capsule, are such an unusual sight, the 1977-build tower has become a magnet for tourists despite years of neglect.

"It is a shame to keep such a master piece away from the eyes of the public.

The tower is one of the most significant examples of brutalism - an architectural style popular in the 1950s and 1960s, based on crude, block-like forms cast from concrete.

Brutalism was popular throughout the eastern bloc but the former Yugoslavia made it its own - seizing on it as a way to forge a visual identity poised between East and West.

Chairs line up inside the Yugoslavia Saloon, inside The Palata Srbija building in Belgrade, Serbia.

A carpet lies inside the Serbia saloon, in The Palata Srbija building in Belgrade, Serbia.

Garage doors are seen outside Block 23 in an apartment neighbourhood in New Belgrade, Serbia.

A chandelier hangs from the top of the Croatia saloon inside The Palata Srbija building in Belgrade, Serbia.

Interest in the style is soaring - particularly since a 2018 exhibition in New York's Museum of Modern Art (MoMA) called Concrete Utopia: Architecture in Yugoslavia, 1948-1980.

"We have dozens of people every week interested in taking our Yugo tour around city landmarks built from the 1950s to 1980s," said Vojin Muncin, manager of the Yugotour sightseeing agency which guides tourists around the Serbian capital in Yugos - former Yugoslavia's once ubiquitous car.

"Genex Tower is among the most interesting sight. People see it on their way from the airport and it immediately draws their attention."

Today one of the pillars is empty, while the other is residential. The rotating restaurant was last open in the 1990s.

Keen to capitalise on the interest, Belgrade authorities are now considering opening parts of another masterpiece of Yugoslav brutalism - the Palata Srbija government building, which is currently only open once a year. 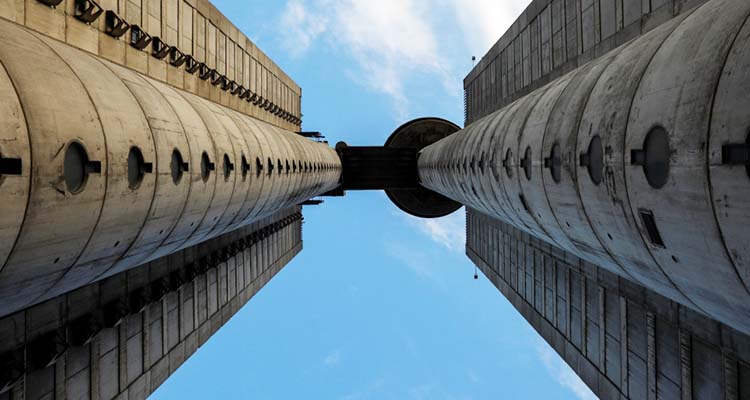 Residential blocks, hotels, civic centres and monuments all made of concrete shot up across the country.

The architecture was supposed to show the power of a state between two worlds - Western democracy and the communist East, looking to forge its own path and create a socialist utopia.

But after Tito died in 1980, and economic crisis took hold, the new elites sought to distance themselves from the socialist regime, including its architecture. 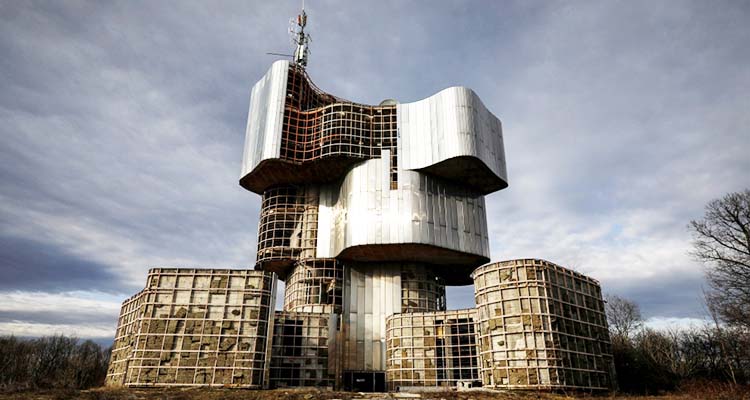 Brutalism was popular throughout the eastern bloc but the former Yugoslavia made it its own.

"Now enough time has past (since Yugoslavia fell apart) and people have begun to appreciate the architecture of Yugoslavia," said Alan Braun, lecturer at Zagreb University's architecture faculty.

The outside of the building is concrete, but the inside is marble. Its centrepiece is a crystal chandelier beneath a 19 metre dome weighing more than nine tonnes.

"It is a shame to keep such a master piece away from the eyes of the public," said Sandra Vesic Tesla, curator of the building.

Other examples of Yugoslav brutalism include the huge memorials commemorating the struggle against fascism by Tito's partisans, often placed in dramatic rural settings.