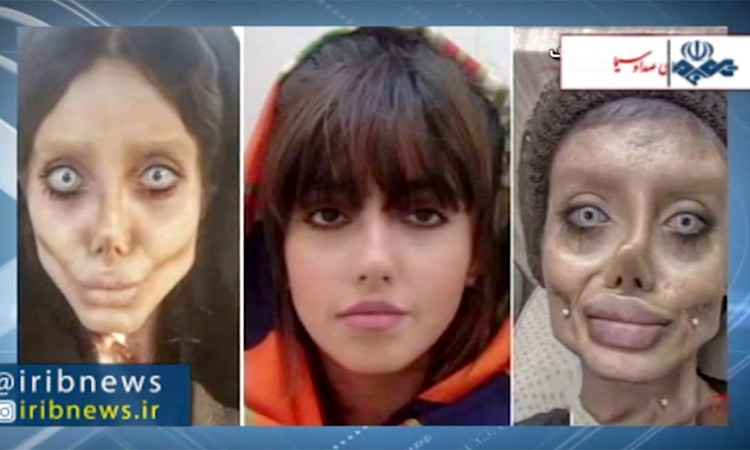 An image grab from footage obtained from Iranian State TV IRIB on Thursday shows a reproduction of pictures posted by Sahar Tabar of herself before (C) and after numerous plastic surgeries. AFP

The famous online personality, Sarah Tabar who altered her appearance to look like a zombie was interviewed in a recently aired program on Iranian state television.

Sarah Tabar was arrested on Oct.5, based on the orders of Tehran’s Islamic guidance court, said the broadcaster.

She was charged for alleged blasphemy, inciting violence, gaining income through inappropriate means and corrupting young members of the society.

"I do not look like these photo shopped pictures right now," the 22-year-old told state television in the interview aired on Tuesday, her face blurred out.

"This is close to what I look like these days," Tabar said, holding a phone with a portrait of herself.

In her current picture, Tabar has a resemblance to Hollywood star Angelina Jolie. However, her face is gaunt, her nose sharply turned up and her cheeks are sunken.

According to Tabar her inspiration for the surgery is to look like a zombie character from the animation “Corpse Bride.” She was not trying to look like Angelina Jolie. 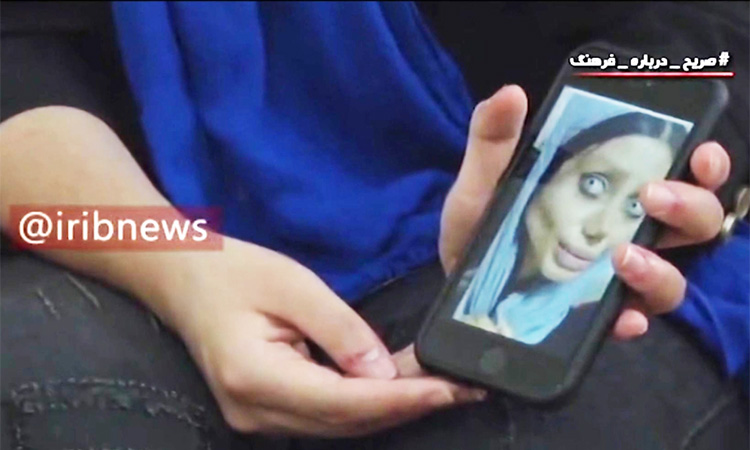 The television channel noted that she was the only child of a divorced couple who had been living with her mother, and that she "could have been in university by now" if not because of her "strange" online persona and fame.

"I saw people were following what I did and, when the likes grew, I felt I was doing the right thing," said Tabar, admitting she had not finished high school.

The Instagram fame pushed her into changing her appearance, despite warnings from her mother.

"My childhood dream was to be famous."

The broadcaster said Tabar admitted that "vulgarity on social media gets a lot of clicks" and if she had not followed this path, she could have been "in a better place right now."

Amnesty International has repeatedly called on Iran to stop broadcasting videos of "confessions" by suspects, saying they "violate the defendants' rights.".