At Carolina Herrera, wildflowers bloom on the Hudson River - GulfToday

At Carolina Herrera, wildflowers bloom on the Hudson River 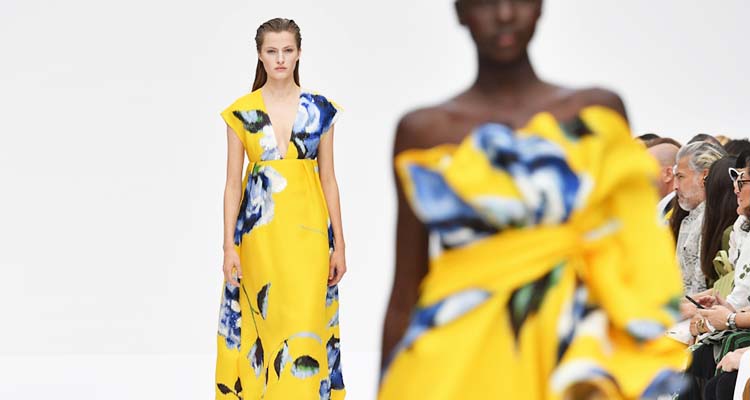 A model walks the runway for Carolina Herrera during New York Fashion Week.

Wildflowers were blooming on the banks of the Hudson River on Monday, thanks to the fertile imagination of Wes Gordon at Carolina Herrera.

Gordon, now into his second year as the label's creative director, upped his game with a crowd-pleasing, flower-themed collection that was big on color and vibrant prints.

The designer said his inspiration was the California super bloom, a phenomenon that leads to an unusually high proportion of wildflowers blossoming at once.

That's what happened on Gordon's runway under a tent overlooking the water at the tip of Manhattan. He sent out a succession of dresses both very long and very short with dramatic bursts of florals.

A model wearing a polka dotted dress by Carolina Herrera walks the ramp during the Fashion Week.

The label's creative director, upped his game with a crowd-pleasing, flower-themed collection.

The designer said his inspiration was the California super bloom.

The runway was a succession of dresses both very long and very short with dramatic bursts of florals.

The evening styles managed to be both luxurious and playful.

One typical print was a bright yellow background populated with large blue flowers. Another striking look was a belted minidress with an impressionistic mix of flowers in hot pink, green and purple.

Gordon was also fond of polka dots - big and bold, and in black and white. And he sent a number of plaids down the runway, for example in a miniskirt and jacket with billowing sleeves, or in a long strapless belted number in blue and tan plaid.

Glam eveningwear finished out the collection, and here too Gordon indulged his fondness for both color, as in a shimmering green number, and for those polka dots.

Gordon described his floral inspiration in the show notes as "the sensory delight of wildflowers as far as the eye can see ... vibrant yellow, hot pink, brilliant orange and bold blue mix with prints evoking ephemeral desert fields blanketed in lilies, verbena and poppies."

Celebrity guests included Martha Stewart, supermodel Karlie Kloss, and actress Vanessa Hudgens, who wore a midriff-baring lacey black ensemble as she danced in her seat at one point to the show's bouncy soundtrack.